I visited the Dodecanese island of Rhodes in 1998 for an end of season bargain holiday.   It was a holiday when accommodation was allocated on arrival and we did rather well because we were given a room at the Rodos Palace Hotel at Ixia on the coast just outside of the town of Rhodes. 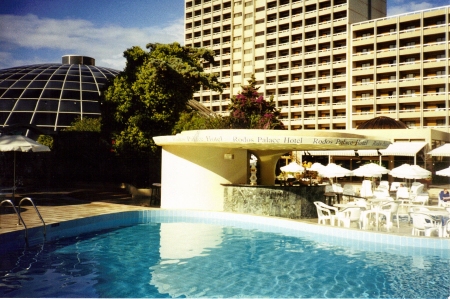 The island of Rhodes is one of the most interesting and has been inhabited for six thousand years and due to its geographical position on the major Mediterranean Sea trade routes is situated at a natural crossroads between Europe, the Middle East, and Africa and this has given the city and the island many different identities, cultures, architectures, and languages over its long and varied history.

The hotel was in a perfect spot, close enough to the town to be convenient but far enough away not to be bothered by the noisy night life.  It had spacious gardens, the room had a nice private balcony and there were swimming pools and bars for enjoying during the day.  In the evening there were tavernas and bars next door where we would eat and drink and during the day there was a wide deserted beach just across the road.

The city of Rhodes was formed in 408 BC and prospered for three centuries during its Golden Age, when sea trade, skilled shipbuilders, and progressive politicians kept it prosperous until Roman times. 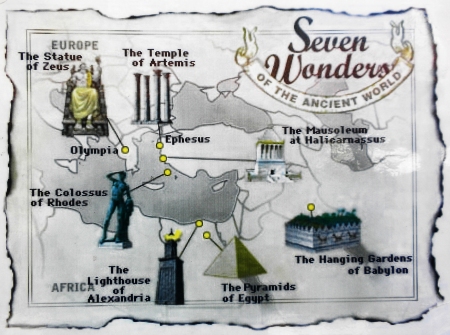 The bronze statue of the Colossus of Rhodes, one of the original Seven Wonders of the Ancient World took twelve years to build and was completed in 282 BC.  The statue represented the sun god Helios and stood at the harbour entrance but a strong earthquake about 226 BC, badly damaged the city and toppled the Colossus.  For the next eight centuries it is said that it lay in ruins until it was sold to a Jewish merchant, reputed to require nine hundred camels to haul it away.  There are no remains of the Colossus today but there are two deer statues in Mandraki harbour, standing on columns where it is widely speculated the Colossus of Rhodes may have been.

A fully laden camel can carry four hundred and fifty kilograms  so that would be roughly about four hundred tonnes of bronze, by comparison the Statue of Liberty weighs two hundred and twenty-five tonnes and is forty-six metres high so using this dubious logic the Colossus of Rhodes would have been ninety metres high and huge. 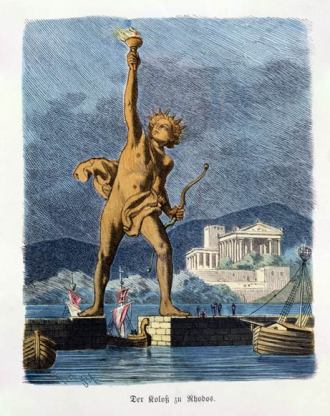 In 1309 the Island was occupied by forces of the Knights Hospitaller and under the rule of the newly named ‘Knights of Rhodes’, the city was rebuilt into a model of the European medieval ideal.  Many of the city’s famous monuments, including the Palace of the Grand Master, were built during this period.  The citadel of Rhodes, built by the Hospitalliers, is one of the best preserved/restored medieval towns in Europe which in 1988 was designated as a UNESCO  World Heritage Site.

Gradually the strong walls which the Knights had built came under attack and withstood the attacks of the Sultan of Egypt in 1444, and of Mehmed II in 1480. Ultimately, however, Rhodes fell to the large army of Suleiman the Magnificent in 1522 and the surviving Knights were permitted to retire to the Kingdom of Sicily before later moving their base of operations to the strategically placed island of Malta. The Knights had ruled the island for two hundred years but Rhodes was thereafter a possession of the Ottoman Empire for nearly four centuries and during this time the city acquired an eastern and Turkish culture and style.

In the 19th century the decline of the Ottoman Empire resulted in the general neglect of the town and its buildings, which further deteriorated due to strong earthquakes and in 1912, Italy seized Rhodes from the Turks. Under the terms of the Treaty of Lausanne, the island, together with the remainder of the Dodecanese, was officially assigned to Italy.

The Italians would later demolish the houses that were built on and around the city walls during the Ottoman era. They also turned the Jewish and Ottoman cemeteries into a green zone surrounding the Medieval Town. The Italians preserved what was left from the Knights’ period, and destroyed all Ottoman buildings.  During the Second-World-War, following the Italian Armistice of September 8th 1943, the British attempted to get the Italian garrison on Rhodes to switch sides but this was anticipated by the German Army, which succeeded in occupying the island.  In 1948, together with the other islands of the Dodecanese, Rhodes was united with Greece.

We visited the castle, walked the city walls and explored the medieval streets and courtyards and visited the Palace of the Grand Master, then walked around the harbour next to the town’s iconic red roofed windmills and admired all of the expensive boats that were moored up in the water.  We especially liked the main square in the centre of the town with its bars and tavernas with high level balconies where drinks were a few drachmas more expensive but it was worth paying just to have a seat in the sun at a table with a perfect view of the square and all of its activity. 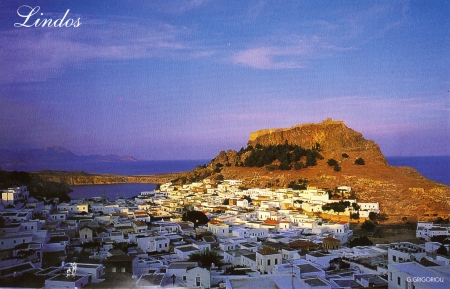 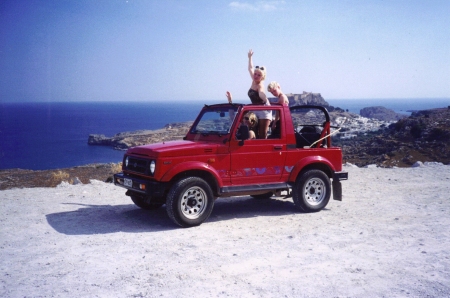 As usual we hired a red jeep because Rhodes is a big island and there was more to see than just the far north and the main town.

We drove along the east coast to the ancient town of Lindos, passing by but not through, the infamous holiday party town and grot spot of Falaraki.  Lindos is a picturesque town and an archaeological site on the east coast of the island about fifty-five kilometres south of the town of Rhodes and its big sandy beaches make it a popular tourist and holiday destination.  Lindos is situated in a large bay and above the modern town is the Acropolis, a natural citadel which was fortified successively by the Greeks, the Romans, the Byzantines, the Knights of St John and the Ottomans and which has spectacular and commanding views of the surrounding harbours and coastline. 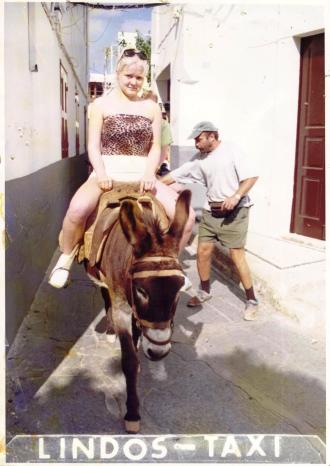 We visited the Acropolis and saw the Doric Temple of Athena Lindia and the Propylaea of the Sanctuary, both dating from the 4th century BC and the Hellenistic stoa dating from about 200 BC.  The relief of a Rhodian warship cut into the rock at the foot of the steps leading to the Acropolis and the Hellenistic staircase leading to the main archaeological area of the acropolis and remains of a Roman temple, dedicated to the Emperor Diocletian and dating from about 300 AD.  At the top we visited the castle of the Knights of St John built on the foundations of older Byzantine fortifications with walls and towers following the natural contours of the cliff and with views all the way across to Turkey.

Later we went to the town of Lindos and took a donkey ride to the very top.  Afterwards we wished that we hadn’t because the animals were old and worn out and the drovers beat them continually with canes to keep them moving.  Lindos was much more like the islands of the Cyclades with narrow streets running between whitewashed buildings and from the top we made our way back down to the bottom past the little shops, tavernas and bars that lined the streets.

This was a good holiday, great hotel, excellent weather, outstanding sightseeing and the children now teenagers so a more adult holiday.  It reacquainted me with Greece after a ten year absence and introduced me to Georges Meris and began my interest in photographing Greek doors and windows. 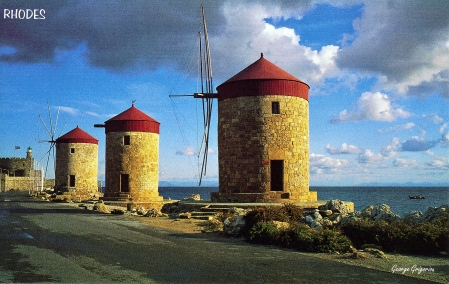