A Life in Ruins – Segobriga, Spain

I wasn’t sure that there would be a great deal to see there so I drove deliberately slowly and stopped often for photo opportunities of the fields with their attractive contours and delightful pastel hues.  Along the way we looked for somewhere to eat and passed through a couple of villages but there was little chance of food and drink because the people that lived there probably think that Belmonte is exciting.  Along the way we left the road to follow a track to the castle of Almenara but it too was in a state of disrepair and closed so we returned to the road and carried on.  Close to our destination we spotted a hotel and a restaurant and we pulled in and took a table in the garden, but the menu prices were considerably higher than we were prepared to pay so we left abruptly before the staff had noticed us and continued on our way resigned to staying hungry.

Within a few minutes we spotted the signs to Segóbriga and as we turned into the historic site we were immediately astounded by the size of the place and it turned out that this is the most important Roman archaeological site in all of Spain.  Amazing! And I had never even heard of it.  There was a café on site where we had an overpriced bocadillo and a small beer before moving on to the entrance where a Spanish lady seemed genuinely pleased to see visitors from England and gave us some precise and clear instructions to make sure we enjoyed our visit to the full.  First of all there was a little film about the Romans in Spain and then a considerable walk to get to the main site and the excavations.

Segóbriga was a textbook designed Roman city, there was a theater, a five thousand seater amphitheater, a chariot racetrack  (circus), a basilica, a temple, public baths, a cistern and a complex system of sewers, everything in fact that you would expect to find in an important city of Rome.  It was incredible to walk around the old streets, wander through the corridors of the amphitheatre, sit in the seats of the theatre and imagine that in this very place there were gladiators in its arena, actors in its theater, emperor worshippers in the temples, Roman Legionnaires swaggering through the streets,  Senators and Magistrates, merchants, artisans and slaves.

Segóbriga was a mining town and the mines brought great wealth and made some of the local families very rich but they weren’t mining for precious metals or for fuel but for a very specialised commodity – plaster, or rather gypsum, which in its crystal state (selenite) is transparent and the rocks could be split into fine sheets to make windows in an age before the Romans had begun to manufacture and use glass.

In ancient Rome buildings had wind eyes, which were square or rectangular holes in walls to let in light and air but without glass panes.  To let in the light had the disadvantage of letting in the weather as well so probably most of the time people kept those windows blocked with a curtain or a shutter.  The idea to use the sheets of crystal gypsum for window panes came around the turn of the millennium when an architect imported some from Spain and used them as skylights to light the public baths in Rome. This caught on quickly and the rich started doing the same for their houses and villas and in time it was used as wind eye glass and the very best quality gypsum came from right here in Segóbriga.

Because we had to wait so long for uncooperative people to move so that we could take the perfect uncluttered photographs it took almost three hours to explore the site and then to visit the museum and it was a long walk round so what had started out as a planned easy day had turned out instead to be very full and very tiring.

This was our last night in Belmonte and as we packed our bags so that we could make an early start in the morning we reflected on what had been three excellent days in Castilla-La Mancha and we looked forward to a long drive in the morning to the city of Toledo and after that on to Ávila in Castilla y Leon nearly three hundred kilometres away to the west. 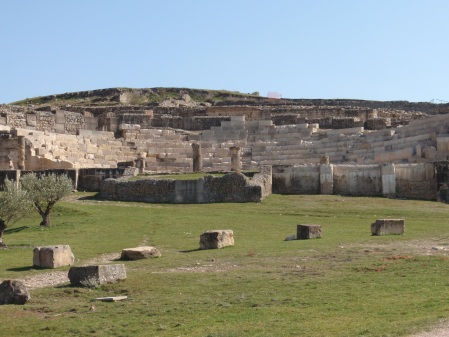 9 responses to “A Life in Ruins – Segobriga, Spain”