A Life in Ruins – Rome, Emperors and Gladiators

There are lots of things that I would like to see and I imagine the thrill of seeing the Pyramids, The Kremlin or the Great Wall of China for example would be heart stopping moments but when viewed for the first time the Colosseum ranks with these and others as a genuine draw dropping, knee buckling event.  I can remember that experience in 1976 but even now, on my fourth visit to Rome, it still produced a moment of wonderment and awe as we emerged from the narrow streets into the Piazza del Colosseo.

Two thousand years previously this had been the largest amphitheatre ever built in the Roman Empire and was capable of seating sixty-thousand spectators (some estimates say eighty thousand but most agree that this is unlikely) at gladiatorial combat events.  I am always stunned by the size and magnificence of the place and even though there are substantial parts of it now missing I find the scale of the place simply breathtaking.  We were going to make this our first place to visit and we were disappointed to see a long slow moving queue but we were quickly picked out as potential easy pickings by a girl selling guided tours which promised a speedy entrance and the services of an expert guide so we agreed to this and paid up. Suckers!

We had to wait now to be assigned a tour leader and it was just our luck to get a head-case!  Silvio was a theatrical extrovert with a dramatic style and with arms flailing and occasionally getting over excited and spitting into his beard he gave us an extravagant introduction to the construction of the magnificent building and the gladiatorial combats and the shows that were staged inside.  This was all really helpful background information but it did seem to drag on longer than expected and all around people began to get fidgety as individual patience tanks one by one began to run dry.

Finally it was time to push through the lines of waiting people  and within just a few minutes we were inside the underground passages below the auditorium where we followed the designated route up a flight of steps where it was interesting to imagine that these had been used previously by thousands of Romans attending the games and we now were following in their footsteps.  We emerged into the interior of the amphitheatre where once there were seats, now long since pillaged and removed for recycling in medieval building projects, and into the bright sunshine where we circumnavigated the arena stopping frequently to admire the views and to imagine what it might have been like to be at this very place two-thousand years ago or so in a noisy and unruly crowd being entertained by bloodthirsty and barbaric games.

Inside the Colosseum it is huge but there isn’t really a lot to see, no statues, no paintings, no exhibits, just an elliptical arena surrounded by ancient brick and concrete, so once a full circuit has been completed, although it feels as though you should stay longer, there is not a lot to hang around for.  This doesn’t mean that the visit experience is in any way disappointing or less wonderful just that it seems to me that there are two types of sightseeing, the first is where we go to admire the statues, the paintings and the exhibits and the second where the experience is simply about being there, in a place that has played such a pivotal role in world history and the development of civilisation and for me the Colosseum is one of the latter.

The day was getting hotter now and it was easy to understand why inside the arena the Roman crowds were protected by giant shades made of Egyptian cotton or why even today the most expensive seats at a bullfight are those in the shade and protected from the sun. We left the amphitheatre and bought some expensive food from a street stall and competed with everyone else to find some shade while we waited for Silvio to return at two o’clock to take us on the second part of the tour up to the Palatine Hill and into the Roman Forum. 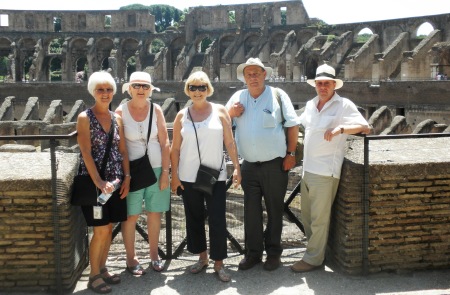 The Roman Ruins at Segóbriga

8 responses to “A Life in Ruins – Rome, Emperors and Gladiators”