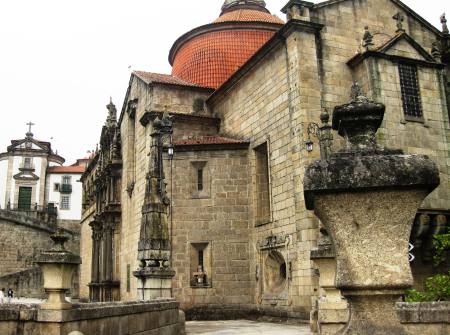 I was struggling and didn’t think I could find something for this week’s challenge until I read Julie Dawn Fox in Portugal and I was reminded of the town of Amarante.

It took us about forty-five minutes to drive to the interesting little town from Vila do Conde and after parking the car we walked through unremarkable streets until reaching the river and in an adjacent square declared it time for the first refreshment of the day. There was no sign of the sun but even under white overcast sky it was still warm enough to sit outside and we ordered drinks and sampled the local speciality of “papos de anjo” (angel chests) which is a traditional sweet egg pastry made from whipped egg yolk that is baked and then boiled in sugar syrup.  They were quite nice but we didn’t call for seconds!

Amarante is an interesting little town and the annual festivities, which take place in early June, are known as the Festas de São Gonçalo, and perhaps because of the romantic-sounding name (Amar is the Portuguese verb to love), one of the traditions of this local celebration is to give a phallus-shaped cake to the one you desire.  Luckily this was May so there was no embarrassing exchange of inappropriately shaped gifts this morning!

Perhaps because of this association with love, Amarante is famous for being the birthplace of an unnatural amount of artists, painters and writers and later we walked around the pretty town with its sixteenth century convent and an attractive eighteenth century bridge across the river Tâmega.

We wandered down streets of seventeenth century mansions with colourful balconies of painted wood brightly decorating the narrow streets and past restaurants with elegant terraces overlooking the river and the beautiful bridge of São Gonçalo, which leads directly to the great monastery that bears the name of the same saint.  Away from the main street we walked through twisting back alleys with cobbled streets, past washing lines full of clothes outside tiny houses with only the most basic facilities and in need of urgent repair and attention.

Finally we reached the bridge across the river where on the 18th April 1809 during the Peninsula War that a small band of Portuguese soldiers held the crossing against the might of the invading French army for an incredible fourteen days. Needless to say the French troops weren’t too pleased and afterwards took their revenge on the local inhabitants and set the buildings on fire before moving on towards Porto.

If you want the recipe for the cakes then go to http://www.maria-brazil.org/papos_de_anjo.htm