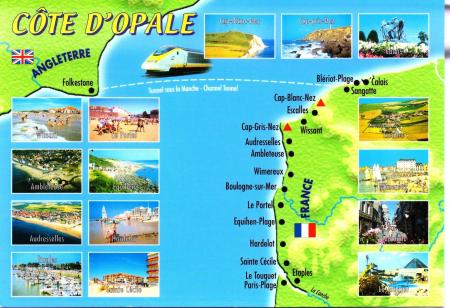 2013 is a special birthday year for my mum as she noisily tips over from her seventy-ninth year to become an octogenarian and as part of the celebrations she invited my brother Richard and me to join her and her partner Alan to visit the north east corner of France and stay at at a hotel that they especially like, the Chateaux de Tourelles in the village of Le Wast, just a short distance away from one of my favourite French towns, Boulogne-Sur-Mer.

Normally I have a preference for travelling by sea and always enjoy the short, weather unpredictable, ferry crossing but they like the Eurotunnel shuttle so on this occasion we took the thirty-minute subterranean route rather than risk the choppy seas of the English Channel and the mad rush to the car deck upon docking.  It was busy at the terminal and on the following day the service set a new record for numbers of vehicles at almost sixteen-thousand. I had been through the tunnel before on Eurostar but never on the vehicle carrying train so this was a new experience for me and overall I have to say that although it is quick and convenient I think I prefer the boats and the rugby scrum.

After arrival disembarkation was quick and we were in the Cite d’Europe, which is an international shopping centre that was constructed as part of the Channel Tunnel project and is designed to bring English shoppers across to France to stock up on cheap booze and cigarettes.  The place has one hundred and forty shops and restaurants but we made straight for Carrefour and the substantial alcohol section where we piled the trolley with cheap beer and wine and then set off for the short trip towards Boulogne but avoiding the direct route down the A16 and driving sedately down the Côte d’Opale instead.

Something like ten-million British travellers arrive in Calais each year and then without looking left or right, or stopping for even a moment head for the motorways and the long drive south and in doing so they miss the treat of visiting this Anglo-neglected part of France; the Côte d’Opale is a craggy, green, undulating and often dramatic coastline stretching for forty kilometres between the port towns of Calais and Boulogne.  English tourists may avoid it but it has been long prized by the French and the Belgians, who enjoy the informal seafood restaurants in fishing villages dotted along the coast and the miles of intriguing coves and sandy beaches that run all the way down this coast that looks across at the south coast of England. 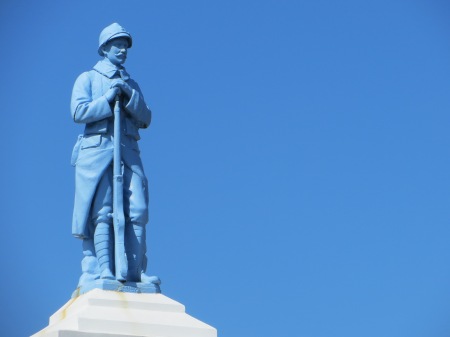 The coastline is punctuated with history, most of it bloody and violent and as soon as we could we found a place to stretch our legs at the Cap Blanc Nez about twenty minutes from the port where we strolled up to the breezy hilltop obelisk commemorating the Dover Patrol that kept the Channel free from U-boats during the First World War and then walked along paths surrounded on all sides by German World-War-Two gun emplacements and bunkers that were built here in anticipation of an Allied invasion.

These concrete defences are so well built and inconveniently indestructible that it is difficult to easily demolish and dispose of them so the answer seems to be to just leave them where they are and let nature do its work and simply let the grass grow around and over them because no one really wants to be reminded of this grim heritage any more and this approach seems to be very effective because five years after I first saw them there is now a lot less to see.

Our next stop was Cap Gris Nez, where France pokes its large chalky white de Gaulle like nose westwards towards Dover and where there are more remains of mighty bunkers that are slowly disappearing under the earth because this is where the Germans aimed their big guns on Britain during the Second World War. Windblown, isolated and perched high above the choppy waves bathed in the iridescent light which gave the Opal Coast its name, the headland was an exhilarating place to watch vessels passing by below in the English Channel and then to become alarmed by a few spots of rain that blew in with the clouds racing in from the west.

It was time for lunch now but Friday in France must be a day when no one goes to work because every town that we passed through was busy and chock full of cars so we drove through Wissant, Audreselles and Ambleteuse without stopping and finally found a parking space in Wimereux as the lunch-time rush finally  began to subside and we found a small bar for a beer and a snack before resuming our afternoon drive towards Boulogne and then to the Chateaux.

The sensible thing to do was to avoid Boulogne in late afternoon but we didn’t do the sensible thing and instead crawled through the traffic and then through the other side and on a thankfully open road to the small village of Le Wast and the Chateaux de Tourelles which lived up completely to the gushing reviews that promised us a wonderful hotel in extensive gardens, a good room and the prospect of an excellent evening meal.

We unpacked, sorted out the bar, poured a drink and sat for a while and simply enjoyed the place until it was time to eat. 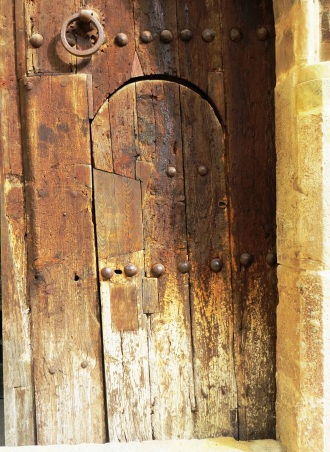 2 responses to “Northern France, Eurotunnel and The Côte d’Opale”