As we were in no particular hurry we slept in and took a late breakfast and then as the sun began to break through the clouds we set off for the short journey to nearby Boulogne, bypassing the direct route and taking a meandering drive through the countryside and the villages.  On the northern outskirts of the town we came across a British and Commonwealth war graves cemetery and stopped the car for a visit.

During the First-World-War Boulogne-Sur-Mer was one of three important base ports for the British Army.  The coastline between General Haig’s headquarters in Montreuil-Sur-Mer (actually nowhere near the sea but with a very fine chateaux and wine cellar) and the Port of Calais was an immense logistics zone made up of army camps, munitions depots and hospitals which for the most part were supplied with men and equipment through the Port of Boulogne.

Boulogne was essentially an enormous extended barracks and hospital complex and most of the public buildings including the schools were requisitioned to take care of the wounded who had been evacuated from the front line and the fighting. Thousands of Commonwealth soldiers died in Boulogne and the surrounding area as a result of their injuries and they are buried and remembered all along this coast in immaculately maintained military war graves. The job of maintaining the burial sites is that of the Commonwealth War Graves Commission which, according to Wikipedia:

“… is currently responsible for the continued commemoration of 1.69 million deceased Commonwealth military service members in 150 countries. Since its inception, the Commission has constructed approximately 2,500 war cemeteries and numerous memorials. The Commission is currently responsible for the care of war dead at over 23,000 separate burial sites and the maintenance of more than 200 memorials worldwide. In addition to commemorating Commonwealth military service members, the Commission maintains, under arrangement with applicable governments, over 40,000 non-Commonwealth war graves and over 25,000 non-war military and civilian graves. The Commission operates through the continued financial support of the member states: United Kingdom, Canada, Australia, New Zealand, India and South Africa.”

It was early, peaceful and eerily serene and apart from a gardener carefully tending the flowers and the occasional snipping of his secateurs around the graves we were the only people there and there was no sound and I was struck by the quiet solemness that seemed to lay heavily on this place. Each gravestone is the same regardless of rank and they line up in rows as though they were soldiers on a parade ground.  Most of these victims of war were obscenely young but what struck me the most was that many were buried here but simply marked in the words of Rudyard Kipling as ‘An unknown soldier of the Great War’.  I didn’t care to think about the horrific injuries that they must have endured that stripped away their identity.

This cemetery at Terlincthun is quite small with just over three and a half thousand graves but it reminded me of an earlier visit to this part of France with my family when we visited the largest Commonwealth War Graves site in France at Étaples where nearly twelve thousand soldiers are buried.

Because of its strategic position Étaples was the scene of much Allied activity during World War One due to its safety from attack by enemy land forces and the existence of railway connections with both the northern and southern battlefields. The town was home to sixteen hospitals and a convalescent depot, in addition to a number of reinforcement camps for Commonwealth soldiers and general barracks for the French Army.

By all accounts this was a truly dreadful place and most soldiers buried in the cemetery died after treatment in the hospitals.  It is said that after two weeks, many of the wounded would rather return to the front with unhealed wounds rather than remain at Étaples.

It was also a particularly notorious base camp for those on their way to the front. Under atrocious conditions, both raw recruits and battle-weary veterans were subjected to intensive training in gas warfare, bayonet drill, and long sessions of marching at the double across the dunes.  There was resentment against the officers who enjoyed the better conditions of Le Touquet and from which the men were forbidden to visit and this led to a famous mutiny in September 1917 which was brutally repressed.

Apart from the solemn rows of white headstones there was no reminder of this unpleasantness that day as we entered the cemetery through the impressive memorial designed by Sir Edwin Lutyens and walked through the carefully tended graves.

I had never visited a war graves site before and it was poignant to read the inscriptions on the graves and sad to see how young so many of them were who never returned to England.  My granddaughter, Molly ran and skipped through the rows of graves and I was struck by the fact that she could only do this because of the ultimate sacrifices made by all those brave men. 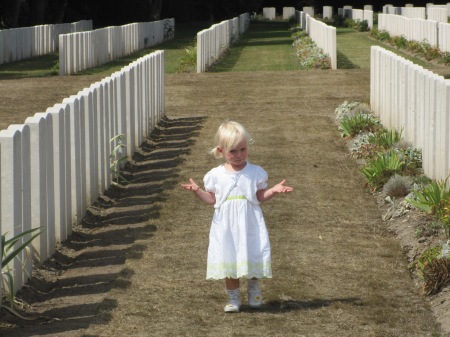