Italy and Puglia, Polignano a Mare

“There can’t be too many prettier seaside towns in Italy than Polignano a Mare. Its medieval old town features houses built into limestone cliffs and caves high above the deep blue waters of the Adriatic…. Don’t leave it all to the Italians – go now!”  Richard Field – WordPress Blogger

As soon as we arrived at the old town we understood our mistake – we had walked towards the sea when we should have walked away from it and if we had gone in the right direction then our accommodation was no more than one hundred metres or so from the centro storico but we had enjoyed the walk and at least it had given the town time to start waking and opening up.

Through the main gate was a different world from the Polignano of residential apartments and rows of parked cars as we entered a pedestrianised old town of sun-bleached, weather-splintered walls, flowers spilling down over balconies and shining limestone pavements worn down by the passage of travellers over hundreds of years. Narrow alleys looped around the town which sometimes took us to a new discovery and at others simply returned us to somewhere familiar.  It was only small of course so within half an hour or so we had walked virtually every street and agreed it was time for a break.

We selected a place with gently rippling parasol shade overlooking the Adriatic Sea called the Balconette and ordered wine and beer.  We were sat close to the door of the restaurant and there sat an evil looking chap with bad feet and crutches who was clearly the owner and who was barking out orders and keep a tally of orders, payments and tips.  He was an objectionable man who we both took a disliking to and a combination of this and the fact that I am certain that we were overcharged  we vowed not to return despite the excellent view 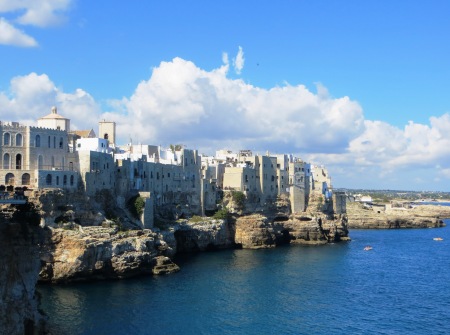 On the way back we dropped into the church which was mostly unremarkable but traditional – except the candles!  Traditionally a votive candle is lit in memory of someone and I have always thought there is something special about lighting a beeswax candle, or even a tea light and standing back and saying a little prayer or dragging up a memory or two.  I was often in the habit of lighting a candle for my dad.  Sadly these little candles seem to be increasingly replaced with a box full of flickering bulbs that, having paid your money, remain lit for a while and then after a pre-determined time simply switch off.

A few years ago I remember going into Florence Cathedral and the heat from the thousands of candles was completely overpowering and I am sure that a little accident could easily have led to a raging inferno so I expect that this has something to do with health and safety.  I decided to find out and although I couldn’t find anything specifically relating to Italy or the Catholic Church I did find a UK website providing ecclesiastical insurance advice that advised against unsupervised candle burning so I am guessing that I am correct in my suspicions.  Alternatively, maybe it just saves on redecorating costs because all of that smoke must make a mess of the ceilings and they are going to be a real chore to repaint every few years!

Earlier on during the siesta we had found a supermarket that had been closed of course so while Kim returned to the balcony of the room it was my job now to find it again and bring back some appropriate supplies.  This was easier said than done because it was quite a bit further away than I normally like to walk for a supermarket and I had no idea of the most direct route and it took several attempts to find the right street and the shop.

After an hour or two on the balcony soaking up the late afternoon sunshine we returned to the old town in the evening and walked around the streets once more this time under the waxy glow of the street lights rather than the full glare of the sun and we took a while to agree on somewhere suitable to eat and eventually decided upon a traditional but untidy little trattoria with outside tables where we enjoyed a very reasonably priced meal of salad and pizza and a jug of house red wine.

Although it was getting quite late there was a lot of activity in the Piazza Aldo Moro (named after an ex Prime Minister of Italy) where there was music and a crowd of people.  It turned out that this was a sort of junior dancing festival so we wandered across to join in.  I would have liked to have seen a demonstration of the tarantella which originates from this region of Italy but instead we got young children performing dances from the movie ‘Grease’ which I have to confess was rather good and I suppose there is a tenuous Italian connection through John Travolta.

One thing though I did find perplexing; it was close to midnight and some of these children were no more than eight to ten years old!  I remember when I was a boy of that age being sent to bed by no later than eight o’clock and I wondered at what time are Italian children sent packing to their bedrooms with the lights out?  But then again I suppose they had been sleeping most of the afternoon during the siesta so even at midnight they were still full of energy.  It was certainly getting late for us so we walked back to the hotel and spent the last half an hour of our day on the balcony with a generous glass of amaretto.

17 responses to “Italy and Puglia, Polignano a Mare”