Italy and Puglia, Polignano to Lecce 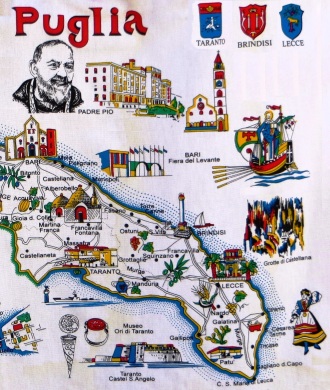 The plan today was to catch the one o’clock train to the city of Lecce in the Salentine peninsula right in the heel of the boot of Italy and just about as far as you can go in the country with the next stop east being Albania.

With a morning to while away, after breakfast we checked out, stored our bags and set off for one last walk around Polignano but this time we ignored the tourist old town and slipped instead into the chessboard, grid pattern streets of the adjacent residential quarter.  This was the old part of the new part if that makes any sense with narrow criss-cross streets and sharp right-angled corners.

At this time in the morning there was more washing of clothes, more scrubbing of steps and more food preparation as housewives prepared fresh pasta and then left it out in the sun under wire mesh to dry.  I don’t suppose the people of Polignano get many northern European tourists wandering about in this part of the town and as we walked there were looks of bewilderment and suspicion as we carried on towards the sea through confusing streets bristling with local endeavour. Our favourite moment was when a mobile hardware store clattered over the uneven cobbles, dangerously overloaded and looking as though it would surely topple over at any moment.  It reminded me of Mr Tuscon’s mobile shop that used to stop in the village where I lived when I was a boy.

And then it was time to turn our backs on Polignano and say goodbye, we had liked it here but we had to make our way back to the train station.  The automatic ticket machine was broken so I worried about how to buy one and we had a wait of about one hour so we found a bar and I had a beer and forgot about the problem for the time being. 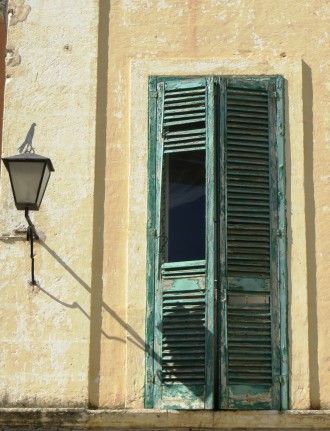 The train arrived on time and soon a ticket inspector was lurching from side to side along the carriage in time with the side to side motion.  He already knew of course that the Polignano ticket machine was out of order so we purchased our tickets from him in a rather long winded and inefficient triplicate form palava which made me wonder why Trenitalia don’t issue hand held tablets to their staff.

The journey to Lecce took just about seventy-five minutes and the train stopped several times along the way.  In between the towns the train clattered through mile after mile of olive groves which stretched out endlessly towards the horizon.  There are an estimated fifty million olive trees in this region of Italy and some are said to be almost a thousand years old.  Here were gnarled old trees with heavy branches supported by stout stakes and I think some of them may actually have been even older than the Roman Empire.

After a while the train began to enter the suburbs of the industrial port town of Brindisi.  Maybe we should have stopped there for a while but as with Bari the guide books were less than flattering making it sound like Middlesbrough or Pittsburgh and so we let it slip past.  Brindisi marked the end of the Roman road, the Appian Way but where Roman Emperors stopped (Julius Caesar apparently declared this to be the end of the World) and where Crusaders left Europe as they set off for the Holy Land we carried on a few kilometres further to our next destination.

The railway station in Lecce was hot and busy but outside the main entrance we walked straight into the siesta time again and the streets were as deserted as an abandoned ghost town.  I wasn’t going to call for a taxi of course and although I was taking a bit of a chance here after my sorry performance in Bari, I told Kim I was absolutely confident of the hotel location and then I had a massive stroke of good fortune when I came across the entrance barely one hundred metres from the station.

This was the Grand Hotel, Lecce, or perhaps more accurately, the Once Grand Hotel, Lecce because although we immediately liked it, it had a slightly faded elegance, was past its best and was clinging on by its fingernails to its once grand status. But it had a wonderful room full of proper furniture, crisp linen on the bed and a well stocked basket of complimentary bathroom essentials.

There were a couple of important jobs to do now so we walked into the city to find somewhere that we might like later to eat and to find a supermarket for some wine.  We dipped into the outskirts of the city as far as the Cathedral but we wanted to save the sightseeing until tomorrow so after spotting some likely dining establishments we walked out of one of the city gates and with another stroke of luck found a supermarket almost straight away. 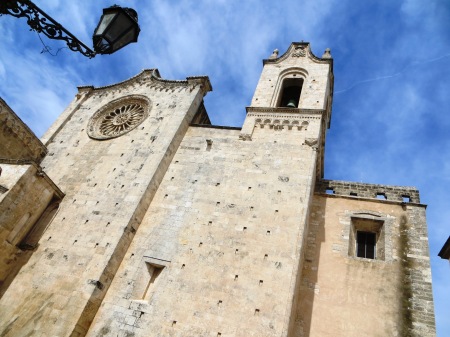 For the rest of the afternoon we sat in the sunshine in the garden around the swimming pool and drank some wine and then upon going back to the room came across a problem – the standard UK/European plug adaptor doesn’t work in Puglia because for some strange reason they have a different socket system in the south of Italy so four days into our travels and we couldn’t charge anything up and the hotel was unable to help except to give directions to a hardware store somewhere on the edge of the city.  It was a problem but it would have to wait until tomorrow to get sorted out.

Later we walked back to the centro storico and in contrast to the siesta period it was vibrant and busy with lots of trattoria to choose from but there was disappointment when we found one that we really liked but it was fully booked and couldn’t squeeze us in.  We found an alternative which was fine without being memorable and when we had finished Kim was so determined to eat in our first choice that she led me round and around in circles through the confusing streets and getting hopelessly lost in the process until by chance we found it again and then booked a table for the following evening.

11 responses to “Italy and Puglia, Polignano to Lecce”