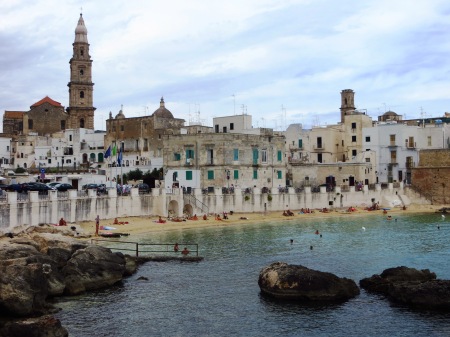 “I love the way Italians park… it looks like a parking competition for blind people.  Cars are pointed in every direction, half on the pavements and half off, facing in, facing sideways… fitted into spaces so tight that the only way out would be through the sun roof.  (Italians) park their cars the way I would park if I had just spilled a beaker of hydrochloric acid on my lap.” –  Bill Bryson – ‘Neither here Nor there’

Reasonably satisfied with my own fussy and overly fastidious parking arrangements we left the car to the mercy of Italian drivers and walked towards the seafront and the port of Monopoli.  To be honest I remained way too stressed to really appreciate the coastal town and as we walked to the Centro Storico I found the place to be faded, shabby and untidy but, the way I see it, no one asked me to visit and if that is the way people like it with dirty streets and beggars on every corner then that is just fine with me.

Maybe it was just my frame of mind this morning because after the drive I wasn’t really in the mood for this.

We found our way to the sea and a small crescent shaped beach of caramel sand where sunbathers were stretched out and working on their tans but we weren’t inclined to go down to the water and instead carried on into the old town and slipped into the labyrinth of streets leading to the cathedral.

So far Monopoli hadn’t really grabbed my attention and based on Kim’s view (often proved correct) that cathedral’s are generally disappointing I wasn’t especially optimistic about a visit there either  but on this occasion Kim was completely wrong and there was a wonderful interior that stood out from all of the other churches  that we had already visited on these travels.

From the Cathedral we negotiated the narrow lanes of the old town down towards the harbour and the medieval castle but there was disappointment when we arrived there (well, for me anyway) because it was closed on account of hosting some sort of conference so we had to be content with looking around the outside and then walking the walls until we found a water side bar and sat down for a while at a table next to two rather odd middle-aged English asylum dodgers who were sharing tales about their lives and their personal trials and phobias but each was so interested in their own stories that they did this without really listening to one another.  It was entertaining but eventually they paid up and left so shortly after that we did too.

On the way back to the beach and with clouds moving in quickly from the east we both agreed that we didn’t especially care for Monopoli and I was glad about that because it meant that we could return to the car and rescue it from its precarious parking spot.  It was perfectly fine of course but I was glad to get back to it and move on and away.

We thought that we might now leave the coast and take the main road towards the town of Fasano and then on to another of the white cities, Martina Franca where we arrived about forty minutes later and where the traffic was at its murderous worst and by the time we had found an empty car park  I was on the verge of a nervous breakdown and Kim wasn’t too far behind me.

The car park was the size of a football pitch and to be safe I parked the car right in the middle where there was no other vehicles and then walked towards the centre.  I wasn’t absolutely confident about this because what normally happens to me in these situations is that I find a good parking spot like this and then a few seconds later someone in a 4×4 or a twenty year old Transit van comes along and parks right up next to me.

I really wasn’t in any sort of sightseeing mood today and was immediately not overwhelmed by Martina Franca, not helped by the poor weather and the fact that we had arrived at about one o’clock and anywhere remotely interesting was closing down for the afternoon siesta and here in Martina Franca there was an absolute rigid adherence to the tradition of an afternoon sojourn.

Cloudy and overcast we stopped for a coffee in a single bar that remained open and then we were both glad to leave the place and after a moment or two of panic when we couldn’t remember where the car was parked we were both happy to return to Alberobello where, by an absolute stroke of luck, we found a perfect parking spot very close to the Trulli.

Even now however the problems weren’t over because the builders hadn’t stopped for the afternoon siesta like everyone else and were still hammering away in the house next door and then it started to rain – heavily – and we were confined to the room with the battering noise and there weren’t even any tourists popping by looking for guided tours this afternoon.

Problems with Builders next door…

Early in the evening, like Moses parting the Red Sea, the clouds suddenly separated and disappeared, the rain stopped and within a few moments there were clear blue skies once again so we rushed outside and took a short walk and then returned to the accommodation where thankfully at last the builders were clearing up and going home.  I asked them if they were coming back tomorrow and they said no and I was so glad about that I offered them both a bottle of beer!

It had been an odd sort of day with equal measures of problems and disappointments and as we prepared to go out for evening meal I suddenly began to worry that our favourite trattoria might be closed for the night and that would just about cap it all.

But I needn’t have worried – it was open for business and when we arrived they seemed genuinely pleased to see us as we surely almost qualified for a frequent user loyalty discount card by now and we enjoyed a third excellent evening meal at a pavement table surrounded by pots of effervescent geranium blooms.

The end of the day turned out to be the best part of the day!

8 responses to “Italy and Puglia, Monopoli and Martina Franca”