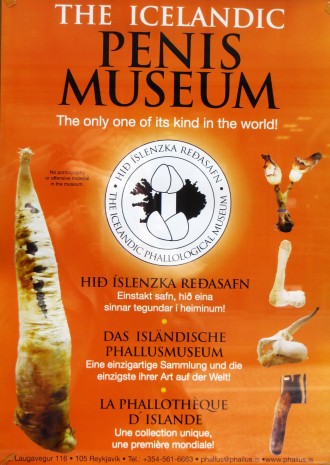 “…collecting penises is like collecting anything. You can never stop, you can never catch up, you can always get a new one, a better one a bigger size or better shape…”  Museum owner, Sigurður Hjartarson

In the hotel lobby there was a selection of  attractions leaflets and one was advertising a rather odd museum so we thought we might take a look.  It wasn’t hard to find and and immediately grabbed our attention and it seemed just too bizarre to miss so we approached the door, turned the knob and went inside.

The Icelandic Phallological Museum contains a collection of more than two hundred and fifteen penises and adjacent body parts from almost all of the land and sea mammals in Iceland including fifty six specimens belonging to seventeen different kinds of whale and thirty-six belonging to seven different kinds of seal and walrus.  In addition it has a collection of non-Icelandic specimens including a giraffe, an elephant and a polar bear!

It was getting close to closing time and there were only a few visitors inside hanging around the exhibition cases.  Two young girls were constantly giggling and not taking it at all seriously, there was a man with a limp, an elderly couple looked thoroughly bemused by it all and half a dozen people from a tour group were wandering around rather self-consciously. For my part I had not seen so many male reproductive organs since I inadvertently strayed onto a naturist beach on the Spanish island of Fuerteventura!

The exhibits ranged from some of the largest to some of the smallest in the animal kingdom. The largest is a portion of a blue whale’s penis measuring one hundred and seventy centimetres long and weighing seventy kilograms but is in fact only the end bit as the entire organ which in its full glory would have been about five metres long would take up most of the room in the small museum!  At the other end of the scale the penis of a hamster at only two millimetres is the smallest item in the collection and needs a magnifying glass to see it.

The section I liked best was the amusing “folklore section” exhibiting mythological penises with specimens allegedly taken from elves, trolls and kelpies.  The Elf penis is supposed to be of impressive proportions but you can’t see it of course because in Icelandic folklore  elves and trolls are invisible so it sits mockingly in an empty glass jar. It’s a good joke!

For many years, the museum apparently tried to get a human penis but was only able to obtain testicles and a foreskin from two separate donors and only recently has it acquired the full article.  I’m afraid that I don’t have any more details on exactly why this is so difficult to accomplish.  The Icelandic donor was a ninety-five year-old man who was said to have been a bit of a gigolo in his youth and wanted to donate his penis to the museum to ensure his “eternal fame”. 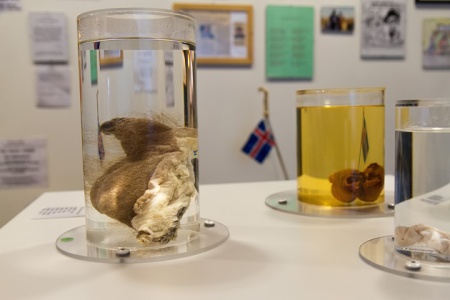 As he got older he apparently began to worry that his penis was shrinking and he became concerned that his pickled prize would not do him full justice and remember him at his best as it were (a bit like each new Cliff Richard album).  He was right to be concerned because after he died in 2011 his penis was surgically removed so that it could be added to the museum’s collection but the procedure was not entirely successful and the contents of the jar were completely unrecognisable (see picture above).

The Icelandic Phallological Museum claims that it exists for the purpose of genuinely serious study into the field of phallology in an organized, scientific fashion but you might not be inclined to agree with that when reaching the end of the tour and ending up in the inevitable souvenir shop where rather tasteless and inappropriate items for sale included key rings and bottle openers each moulded in the shape of a penis that were drawing more uncontrolled laughter from the two young girls.

I don’t regularly buy souvenirs but if I was going to buy a mug from Reykjavik I think I would be more inclined to go for one with a picture of the Sólfar Suncraft or Leif Ericson in preference to one with an image of a male private part.

So we left the  museum that I am confident to declare the oddest in the World, even more bizarre (although I haven’t been there) than the Kansas Barbed Wire Museum in the USA, the Dog Collar Museum in the UK or the Toilet Museum in New Delhi, India.  In Amsterdam there is a Museum of Handbags and Purses!  If anyone has any alternative suggestions by-the-way then I am happy to consider them for inclusion in this list!

Near to the museum there was a small supermarket and when in a foreign country I always like to drop in and see what unusual items I can find on the shelves. Disappointingly on this occasion everything seemed to be rather familiar with a range of items that I might expect to find in any UK supermarket including rather oddly a freezer cabinet full of Iceland (the UK supermarket Iceland) frozen pizzas.

Eventually we came across the chilled section and here were the sort of items that I was hoping to find and which soon had me giggling like the two girls in the penis museum.  Here were some frighteningly unappetising sounding salad spreads with names that sounded as though they should be more appropriately being exhibited next door and if you have ever wondered why sometimes products change their name to be more universally acceptable then here is an example why… 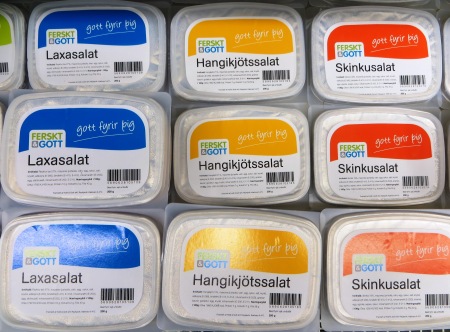 Later we returned to the Best Western Hotel to claim our complimentary drinks in compensation for the inconvenience of the double booking issue and although I suspect that they hoped that we wouldn’t turn up they were true to their word and showed great hospitality and served us our wine and beer.

We might have stayed longer but our plan was to walk into the city for evening meal but as we left the hotel Kim spotted somewhere close by and once again demonstrated her uncanny knack of finding a good restaurant and on the edge of town her instinct led us to a small bistro with a short menu called ‘Harry’s Bar’ and we were glad of that because none of us really felt like walking any more today and the food turned out to be just wonderful and hopefully not served up from these tins of processed meat. 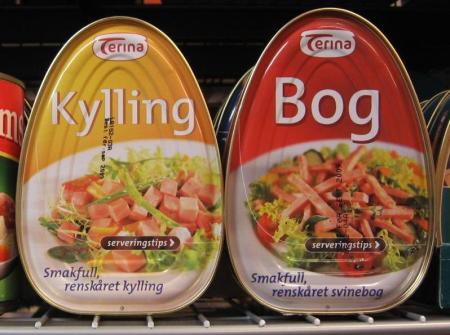 34 responses to “Iceland, The Penis Museum and Dodgy Groceries”