Iceland, The Golden Circle and the Geysers 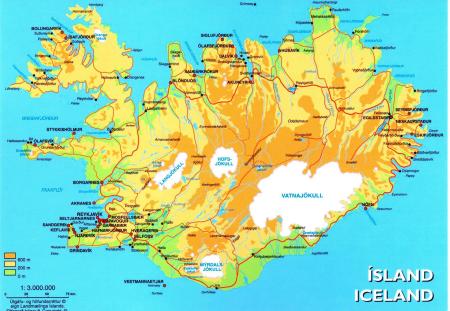 Today we planned to drive one half of the Golden Circle to see the hot water geysers at the rather unimaginatively named Geysir and then the waterfalls at Gullfoss.  We were hoping for improved weather but after breakfast and as we left the hotel we were to be disappointed because there was grey hanging cloud and a slight dampness in the air.

The road out of Reykjavik took us eastwards and as we drove we began to appreciate fully the landscape and as the sun began to make a jagged appearance through broken clouds we stopped for a while to enjoy the wide open spaciousness of the countryside.

Living in a crowded country it is nice to visit places where there is no one else about and there was a real sense of solitude and isolation and this was is surprising really when you consider that Iceland only has a population of slightly over three hundred thousand people and that population density is the lowest in Europe at less than three people per square kilometre. That is about a hundred times less than the United Kingdom at two hundred and forty-four people per square kilometre and a lot less crowded than the most congested country, which is Monaco, at sixteen thousand four hundred people per square kilometre which probably explains why it is difficult to get a sun bed on the beach or a sensible restaurant reservation there.

Further along the route we came across some Icelandic ponies that were obligingly posing for visitor photographs and a bit of petting.  The ponies are unique to this country with laws that prevent the importation of any other equine breeds that might compromise the pedigree and after the ponies we stopped for magnificent views of the River Sog with the sun hugging the horizon and shooting teasing shafts of temporary brightness through the heavy clouds. What little sunshine there was, we welcomed because it transformed the khaki scrub into flowing golden meadows and a symphony of winter colours stretching across vast open fields to magnificent snow capped glaciers beyond.

The drive to Geysir was much further than I remembered from a previous visit but along the way there were a number of viewing points and we might have stopped to see an old volcanic blow hole and according to the guide book now filled with turquoise blue water and an impressive waterfall with surging white water rushing over black rocks and creating a hanging spray of misty water, but as we drew into the car park Kim spotted a 200 krona entrance fee, declared it not worth the money and dissuaded everyone else from the viewing opportunity.  Rather selfishly I thought but didn’t really mind because I had seen it before.

Everywhere there was evidence of volcanic and geothermal activity with a strong smell of sulphur hanging in the air like heavy Victorian parlour curtains  and a landscape of cracked and broken rocks and deep fissures like open earth wounds that made the place seem precarious and exciting.

Iceland, I thought, is a bit like Wales, but with attitude!

Finally, after I had nearly taken off the bottom of the car driving over the most vicious speed hump that I have ever encountered,  we reached Geysir in the Haukadalur valley, which is the oldest known geyser and one of the world’s most impressive examples of the phenomenon.

Geysir is a thermal park atop a vast bubbling cauldron of geothermal activity. Hot and cold springs, hissing fumaroles and sulphurous mud pots of unusual colours and temperatures decorate the surface.

I had seen geysers before at Yellowstone National Park in the USA  and these here were every bit as entertaining and impressive.  We followed the path past the mysterious bubbling mud pots and the threatening steam vents and I was able to act as guide because last time here  we tagged along with a bus tour party who had an entertaining and informative guide.

The original great Geyser erupts only infrequently now so you could be a long time hanging around waiting for a show.  Apparently people used to encourage it to blow by pouring soap powder into the borehole as this was a generally reliable way of encouraging it to perform but eventually this stopped working because the residue of the soap clogged up the underground vents rather like an automatic washing machine that hasn’t been rinsed through.  Geologists now believe that it requires a dramatic event such as an earthquake to set it off again.

Luckily the nearby geyser Strokkur erupts much more regularly every five minutes or so to heights of up to twenty metres (that’s the equivalent of about five London double decker buses).  Crowds of people were gathered expectantly around the glassy pool waiting for the translucent blue water bubble to foam and then dramatically break through the surface forcing many gallons of boiling water and hissing steam into the air.

There were about thirty other mud pots and water pools and it was a good job that we had the benefit of the advice of the previous tour guide because he had provided warnings on temperatures and what you could comfortably touch and what you couldn’t because some of the pools contained boiling water that would strip flesh from fingers as though putting an injudicious hand into a pool of piranha fish and would have surely  involved an unplanned trip to the infirmary.

After we had watched the geyser erupt a few more times we went into the nearby shop but left again almost immediately on account of the silly prices and because the coffee was served in cardboard cups rather than porcelain mugs (don’t ask me why)  and continued our journey towards Gullfoss and the falls.

27 responses to “Iceland, The Golden Circle and the Geysers”