Holy Week and the Semana Santa in Sigüenza

The Semana Santa is one of the most important traditional events of the Spanish Catholic year; it is celebrated in the week leading up to Easter and features a procession of Pasos which are floats of lifelike wooden sculptures of individual scenes of the events of the Passion.

At the heart of Semana Santa are the brotherhoods, associations of Catholic laypersons organized for the purpose of performing public acts of religious observance and to perform public penance.  They organise the street parades and also undertake many other self-regulated religious activities, charitable and community work.

In Sigüenza the Semana Santa is organised by the Brotherhood of the Vera Cruz which dates from 1536 and whose members carry the heavy wooden sculptures dressed in armour and military uniform from the days of Spanish Empire in Flanders and the Netherlands.

Only a member of the Brotherhood may take part in the Parade and although membership is open to any baptised person there are some complex internal rules that generally limit who can participate in a procession.  Very often these permissions are passed down through families like a precious heirloom and I have read that in some cases it can take many years to be granted a permission – even longer than getting membership of the Augusta National Golf Club in the USA or the surviving Hereditary Peer’s Club at the House of Lords in London.

The Parade started more or less on time (which is generally rather unusual in Spain) in a dark public park at the bottom of the town and set off slowly in the direction of the cathedral, swaying and sweeping and accompanied by the rhythmic throb of heavy drums and the mournful wailing of trumpets .

First came the men in black cloaks and pointy hats who, although bearing a sinister resemblance to the Ku Klux Klan, in fact precede this rather unpleasant racist organisation by several hundred years, and whose robes are meant to depict the Nazareños or people from Nazareth.  They walked slowly as though their shoelaces were tied together and their conical hoods swayed slightly from side to side as the occupant struggled to see through the two tiny eye slits as they coped with the restricted vision of the hood.

The hoods are called capirotes and were originally designed so that the faithful could repent in anonymity, without being recognised as self-confessed sinners.

After the man who had the responsibility of carrying a rather heavy and unwieldy looking cross came the first of the religious floats, weighing several hundred kilograms each and carried by at least ten strong men who even so had to stop quite frequently to take a breather and rest the floats on wooden poles and on account of these regular stops the progress of the Parade was quite slow. 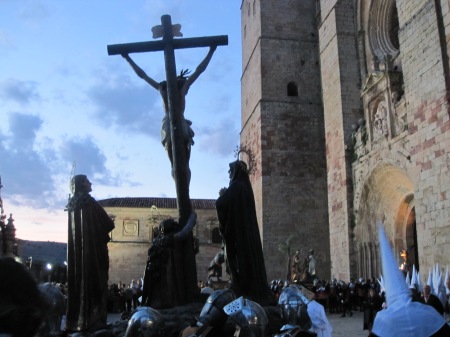 The theatrical display of pageantry and celebration moved slowly along a straight flat road but soon turned left and had to tackle a long energy sapping climb up a steep street that led to the cathedral and required ever more frequent stops.  Each time the float carriers set the structure down on their stout wooden poles, breathed a well deserved sigh of relief and took a few moments to recover their composure.  One thing was certain – these things were heavy – very heavy indeed.  Eventually some clever person in command (clever because he was not carrying the heavy lump on his shoulders) tapped a pole on the ground which meant resume carrying position and then tapped it a second time which meant commence walking.

The magnificently presented sculptures were punctuated with bands of drummers who beat out a steady pulsing rhythm in time with the marching of the men in military uniform carrying the pasos and then the penitents in silken gowns of pristine white and occasionally purple flowing around their ankles and they all marched, sometimes shuffled, slowly and in sombre fashion to the top of the hill and eventually to the cathedral square where one-by-one each of the floats were taken inside the main doors and manoeuvred carefully into position on top of the church pews. 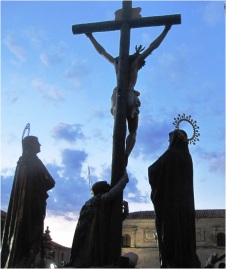 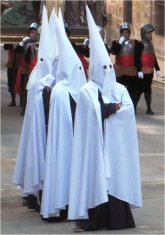 18 responses to “Holy Week and the Semana Santa in Sigüenza”