Yorkshire, England – Ripon and the Cathedral and Tykes on Bikes

“I came around a corner in the road, not thinking of anything other than reaching my destination, miles to the north, in the Yorkshire Dales,  rising up ahead of me… was a gorgeous church, practically towering over me.”

I have been challenged several times for neglecting to visit more places in the United Kingdom and so after many years avoiding UK travel opportunities for some unexplained reason I decided completely out of character that we should set off for a couple of days into neighbouring Yorkshire.

The journey was a pleasant, mostly free flowing motorway and as this was a bank holiday I considered ourselves fortunate to reach the Cathedral city of Ripon in a little under two hours and parked the car close to the large Market Square and wandered into the centre.

If I had temporarily forgotten why I don’t travel in England I was reminded straight away.  Apart from the obvious differences in physical layout (and to be fair Ripon has a large and attractive market place) they are all the same.  Every town has the same shops, there is practically no individuality in the town centres.  Every shop that I can expect to find in my home town could also be found here.  These are not shops that interest me a great deal in Grimsby so it was completely unlikely that they would do so in Ripon.

Even worse than this however is the fact that town centre shops are in decline and just as in every other English town there was an over-supply of banks, building societies and pay day loan money lenders.  The trouble with financial service providers of course is that they simply cannot make their window displays interesting and except for a different logo all they can display is a list of lending and savings rates all of which are mostly similar anyway.

And then there are coffee shops. Coffee shops everywhere, they are spreading like a disease and I fail to understand the attraction of paying an inflated amount for a teaspoon full of granules and some hot milk and water.  If you want a drink – go to the pub!

Not being a fan of cycling I had forgotten that the 2014 Tour de France was starting with three stages in Yorkshire and this at last explained why there were so many yellow bicycles on display. Bicycles everywhere, yellow jerseys, yellow shop displays, yellow flags.  Every shop window, every advertising hoarding, every lamp post – the biggest and most successful French invasion since the Norman Conquest. 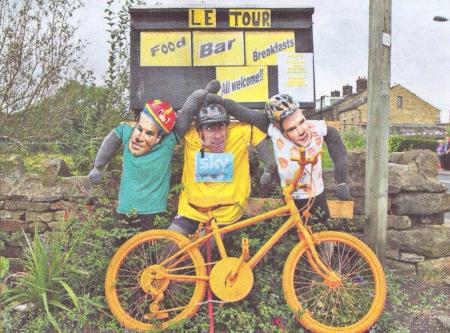 Personally I find it rather odd that they should start the Tour de France in Northern England, it’s like playing the first week of Wimbledon at Roland Garros or racing the first ten laps of the Canadian Grand Prix at Indianapolis and almost as daft as holding the FIFA Football World Cup in Qatar.

It didn’t take very long to walk around the centre of the fourth smallest city in England (fourth after Ely, Wells and the City of London) and after visiting a display of local art (not very good) in the Tourist Information Office we made our way along a street of charity shops and tea rooms to the jewel of the City – the Romanesque Cathedral.

The website Britain Express awards Ripon Cathedral a Heritage rating of four out of five and we entered through the main doors and waited for a few minutes while prayers were being said and then made a rapid tour of one of the smallest cathedrals in England.

Ripon is the Cathedral of the Bishop of Leeds for the Diocese of West Yorkshire and the Dales.  This is a new Diocese created by a Church reorganisation in 2014 and as well as Ripon the Diocese has two more cathedrals at Wakefield and Bradford.  In fact Yorkshire has five cathedrals in all because there are two more at York and at Sheffield.  I used to think that each English County had only one Cathedral city but it turns out that as well as Yorkshire having five, Lancashire has four and Cambridgeshire, Kent and Hampshire all have two each.  Of all the forty-two Diocese however, West Yorkshire and the Dales is definitely however the only one with three cathedrals!

It is also possibly the largest Diocese in England although both Lincoln and York are working hard to dispute this claim and take bragging rights for themselves. It’s a very close thing, all of them cover an area of about two thousand seven hundred(ish) square miles but this is nothing however compared with the Diocese of Gibraltar in Europe which is geographically the largest diocese of the Church of England covering nearly a fifth of the entire World including North Africa, Europe (but not the UK obviously because this is split between Canterbury and York), a bit of Asia (Turkey) and the countries of the former Soviet Union.

Despite this immensity it has only one cathedral, the Diocesan Cathedral is the Holy Trinity, Gibraltar which is interesting for its Moorish style of architecture and it is headed by the Bishop in Europe, Rob Innes.  Except for having to live in Gibraltar* that sounds like a rather good job!

Plain and austere (except for Gibraltar), Anglican Cathedrals are no way near as interesting as the great Catholic cathedrals of Europe so it really didn’t take a great deal of time to look around.  At one stage there are some nice carvings of a handful of English medieval Kings and an impressive stained glass window but the Cathedral is most proud of its Saxon crypt which dates from 672AD and is claimed to be the oldest church building in England which has been in uninterrupted continuous use.  The crypt, less than ten feet high and seven feet wide, is part of one of England’s first stone churches and was founded by St Wilfrid to be the guardian of the Christian faith in the Saxon kingdom of Northumbria.

On account of this I was expecting great things but a steep set of steps led to the overwhelmingly disappointing bare room and another set of steps led out again almost immediately from the other side.

And so we left the Cathedral and found a small café where we stopped briefly for a light lunch and a pot of Yorkshire tea and then made our way back to the car park and drove out of Ripon towards our next destination at nearby Fountains Abbey.

Some interesting information about cathedrals

* Actually he doesn’t live there at all but rather in Crawley in Sussex.  I’ve been to Crawley and on balance I think I’d rather live in Gibraltar!

37 responses to “Yorkshire, England – Ripon and the Cathedral and Tykes on Bikes”