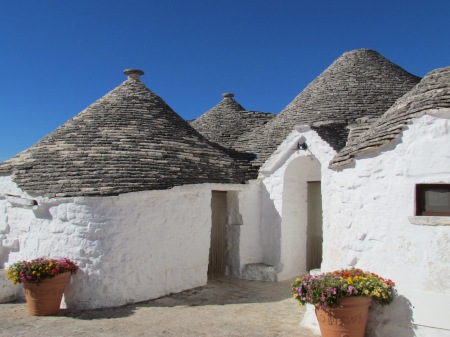 Trulli houses are unique to this area of Italy, they are rather like an igloo with a conical roof and a single windowless room inside with shallow alcoves for bedrooms and storage.

Where they first came from is a matter of some debate. One theory is that since Trulli can be built up and pulled down in a hurry, in past centuries their owners would demolish their own buildings whenever the tax man came to town to assess property duty, and then rebuild them when he had moved on.  Interesting but that seems unlikely to me, it seems an awful lot of trouble to go to just to avoid a few pence in tax!

When one house became too small, the owner would just stick up another one next door, and knock the walls through – repeating the process whenever more space was needed.