Around about this time of year a lot of people are receiving invitations to attend a Royal Garden Party at either Buckingham Palace in London or Holyrood Palace in Edinburgh*  and this always leads to renewed interest in my post about the time I was lucky enough to be invited.

Some of them however really make me giggle!  This one for example: ‘Buckingham Palace Garden Party, where to get changed?’  I think it is good enough of the Queen to invite people to trample all over her back lawn without expecting her to provide changing facilities as well, can you imagine the queue of people trying to get into Her Majesty’s en-suite!  The answer is simple, if you are staying in a hotel overnight then get changed around about midday and then get a taxi to the Palace but if you are travelling there on the day then I’m afraid you will have to go in your finery and take appropriate abuse from teenagers and beggars on the Underground!

This year I have spotted a couple of search questions relating to the weather.  The first is ‘rainwear for Buckingham Palace Garden Parties?’  which is a question that if you have to ask means that you shouldn’t really be going but I will continue to try and be helpful and suggest a smart raincoat or mackintosh, a sensible hat and appropriate shoes but however bad the weather is don’t expect to be allowed inside in a North Face kagool or a sou’wester and a pair of wellington boots!

My favourite for this year (so far) however is this: ‘If raining does Royal Garden Party move indoors?’ which has to be one of the dumbest search questions that I have ever fallen off my chair laughing at.

There are 8,000 guests at a Royal Garden Party and although the Palace is huge (77,000 square metres) I am fairly certain that the Queen wouldn’t want 8,000 damp people in muddy shoes and wet clothes wandering around over the royal carpets, pilfering the treasures and helping themselves to the gin!  I cannot get this vision out of my head of the Queen making an announcement from the back door, ‘oh do please come inside all of you, you’ll catch your death of cold out there’ or perhaps the more direct Prince Phillip, ‘Don’t stand out there getting wet you silly buggers, bloody well come inside!’

Bad weather at a Royal Garden Party isn’t unusual however and there have been washouts in 1931, 1937, 1944, 2000 and 2009.  In 1996 a bolt of lightning hit the garden and two people were burnt and injured.  And it isn’t just rain that can spoil the day because in 1958 there was a heat wave and it was so hot that several guests collapsed with heat stroke and had to be treated in hospital.  There was no such thing as sun protection cream in 1958! 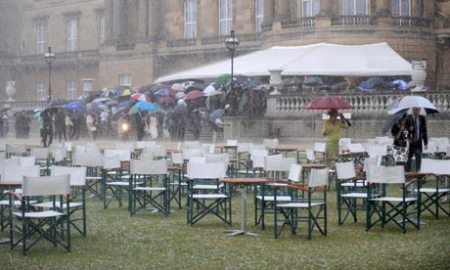 * Holyrood Palace remains for now the official residence of the Queen in Scotland but I suspect if Alex Salmond gets his own way in September in the independence referendum he’ll be looking to move in there himself while the obnoxious Nicola Sturgeon will no doubt be thinking about Balmoral!