Ireland, County Clare and The Burren 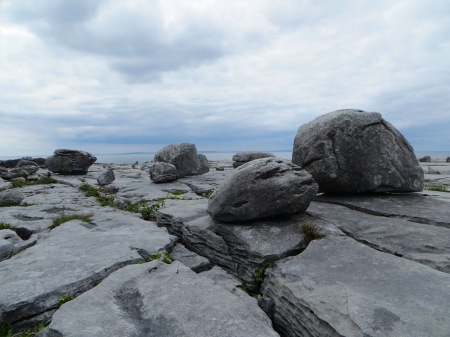 “The Burren is a country where there is not enough water to drown a man, wood enough to hang one, nor earth enough to bury him.”

Later in the morning we were leaving Galway to drive south through the Burren and towards our next scheduled overnight stop at the town of Ennistymon in the heart of Father Ted* country but as this wasn’t an especially long journey we were in no particular rush to leave and so after breakfast we wandered off into the city again to visit the Saturday morning street market.

I have explained before (several times) that I am not a fan of shopping but I don’t mind the local market especially one that sells regional produce and handmade crafts so it was quite enjoyable strolling around in the sunshine, tasting local food and debating whether or not to buy a pointless souvenir or a piece of traditional Irish woollen clothing that we would possibly never ever wear again once back home.  So we didn’t.

As midday approached we turned our backs on Galway, threw a few more coins into the collection boxes of the street entertainers and returned to the hotel to check out and load the car.

The car! OMG the car!

Over the last forty-eight hours I had forgotten about the warning lights on the dashboard and they flashed up again like casino gaming machine as soon as I turned on the ignition and although they are normally supposed to go out after a couple of seconds or so they took it in turn to blink and flash and most worrying of all there was that pesky engine management warning light again.  The engine sounded sweet enough however and there were no plumes of black smoke or sounds of exploding metal so we carried on and resolved to ring the car hire company later on. 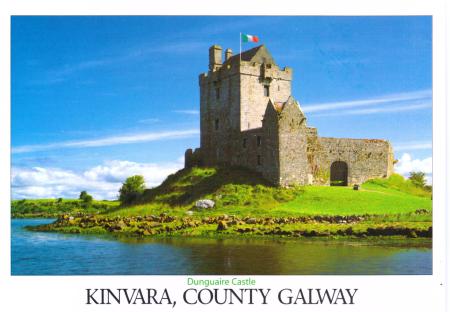 We drove inland along the north shore of Galway Bay, then south before turning west along the south shore and into a region called the Burren, an area that makes it into every top ten list of natural wonders in Ireland.  A vast barren area of bare limestone rock  and at first sight very little else and the first coastal village that we arrived at was Kinvara where we stopped at the outskirts at the site of the restored Dunguaire Castle.

According to legend if you stand at the front gate and ask a question you will have an answer to by the end of the day.  While Richard and Pauline went to the top of the battlements and Kim made a circuit of the castle looking for photo opportunities I made my way to the front gate and asked my question, ‘is the car going to blow up?’

Out of all of us Richard was the most excited about the Burren and plotted a route to take us into the interior to see rock formations formed by criss-crossing cracks known as ‘grikes’ and isolated boulders called ‘clints’ which between them have formed deep crevices with layers of fossils and the home to a multitude of alpine plants and he wandered off and poked his camera lens into these interesting places.  Kim and Pauline were obviously much less impressed by this rocky wilderness and returned to the car after only a very quick and discourteous glance but I took a look around and tried to get a better understanding of the bleakness of the place and if I had been a geologist or a botanist then I am certain that I would have got very excited, but I’m not and I didn’t.

With Richard outvoted three to one we now returned to the coast and to the village of Ballyvaughan which seemed unexpectedly busy.

The reason was that there was a cycle event taking place today called the tour de Burren and nearly two thousand cyclists were taking part and were all due at the finishing line in Ballyvaughan later this afternoon.  We stopped for a short while for a Guinness and a sandwich and then we made our way out of the village and headed west before it was completely taken over by women in inappropriately tight lycra, men with shaved alien legs, those weird helmets that cyclists wear and competitors and spectators alike in garish bright colours that for driving safety reasons required the use of double sunglasses.

Driving became increasingly difficult now because all of the cyclists were coming towards us in the opposite direction and it needed total concentration not to knock any of them off their bike and spoil everyone’s afternoon.  There was only one near miss when a cyclist choose to make a risky overtaking manoeuvre at the top of a ridge just as we were approaching from the other side.  I demonstrated the reactions of a formula one racing driver and braked hard to avoid a collision and caught the look of sheer panic on his face as he swerved back to his own side of the road just in time but I am quite certain that it was the sort of incident that would require him to disinfect his saddle later on!

The scenery was spectacular now as the road swept around the coast in a roller-coaster sort of way and we stopped several times to admire the views and walk across the grikes and even Kim and Pauline were finding it interesting now.  And so were some of the cyclists because many of them were also pulling up and taking photographs in a leisurely sort of way that convinced me that this wasn’t a cycle race in the same way that the Tour de France’ is a cycle race because I am sure that Chris Frome doesn’t stop to take pictures whilst cycling through the Pyrenees.

At Black Head Point the road turned an abrupt 90° and we headed south with the Atlantic Ocean to our right.  The road all along this coast is called the Wild Atlantic Way but there was absolutely nothing wild about it today and with blue skies, sunshine and no wind the sea could hardly find the energy to make a slight ripple let alone a crashing wave and the water caressed the shoreline in a gentle peaceful sort of way.

With the dashboard still lit up like the flight deck of the Starship Enterprise we carried on now towards the Cliffs of Moher. 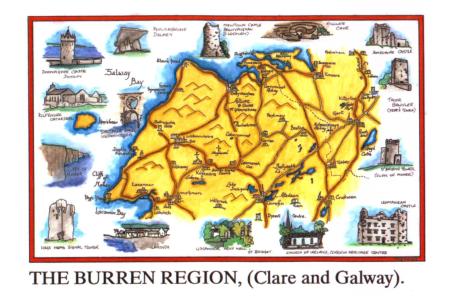 * As my UK readership only makes up about 20% of all my page views an explanation is required:

I am going to mention Father Ted again in the next couple of posts so I need to tell you that this was a cult UK situation comedy about three priests living in Ireland which generally pokes fun at Ireland and its stereotypes.  It probably doesn’t travel too well.  There was once talk of a US version but the project was abandoned before it started. 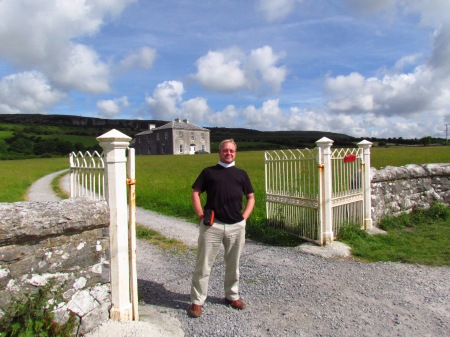 32 responses to “Ireland, County Clare and The Burren”