Ireland, The Ring of Dingle, Famine, Immigration and Music

“At the very edge of Europe, as far west as you can go in Ireland…. once described by National Geographic as the most beautiful place on earth… a place where the mountains roll into the ocean.

The plan now was to get back to the car and drive to the most westerly point of the Dingle peninsula which is called the Ring of Dingle or the Dingle Way depending on whether you are driving or walking.

We weren’t going very far so the flashing dashboard and the prospect of blowing up the engine didn’t worry me to any great degree and we left the hotel car park, negotiated our way out of Dingle and picked up the scenic road to what seemed like the ragged edge of the World with a coastline of jagged cliffs and inhospitable rocky inlets.

The road climbed high above the sea, sometimes close to the ocean and sometimes heading off inland and soon we came to a succession of small tourist stop off points advertising historic attractions and we pulled into a car park promising an Irish famine cottage and we purchased tickets from an old lady in a ticket shed in a bizarre transaction that took place through a half inch gap in a window as though she was highly suspicious of visitors or thought we were bandits who would steal the days takings which by mid-afternoon must have been worth all of about €15.

There was a strenuous walk to the cottage and a farm and behind us there were some wonderful views over the south of the peninsular, Dingle Bay and the Kerry Mountains on the opposite side which made it easy to understand why Hollywood film makers have chosen this place as a location for films such as Far and Away and Ryan’s Daughter.

Inside the cottage there was a recreation of a typical mid-nineteenth century family home and information boards about the famine and the consequences.  It seems that at that time Irish people lived almost entirely on potatoes and that a working man would eat as much as fourteen pounds a day – that is a lot of potatoes, roughly equivalent to two hundred and fifty bags of potato crisps!

Now, I know potatoes are versatile – boiled, baked, mashed, fried, hash browns, dauphinoise, gnocchi but I imagine this sort of diet can become awfully monotonous!  Unfortunately not only did the Irish rely completely on the potato they specialised in just one variety.  The Arran Banner was a heavy cropper but also particularly susceptible to the potato blight virus and a succession of harvest failures in the late 1840s led to starvation, death, farm failure, cruel and vexatious evictions by English absentee landlords and eventually mass emigration to the United States. 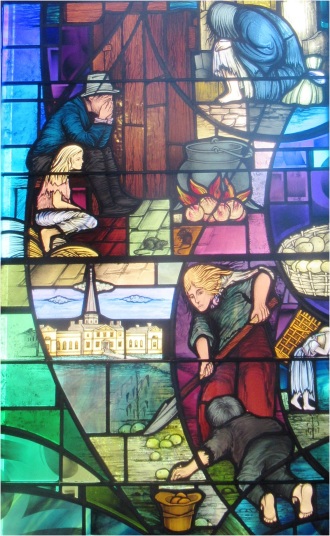 Interestingly it is most likely that the virus came from the United States in the first place (just like the phylloxera virus that infected French vine crops at about the same time) but regardless of this they blamed the English and five million Irish (80% of the total population at the time) chose to go there anyway.  Today nearly sixty million people in the USA, almost 20% of the population, claim Irish roots and twenty-four out of forty-six of US Presidents (including Donald Trump) have claimed Irish ancestry.

For only €4 (senior rate) it was a good reconstruction and there was a curious ancient burial mound with an information board but a path blocked by a barbed wire fence and no real sign of where the ancient monument actually was so confused by that we returned to the car and carried on.

A little further along the road there were signs to fifth century beehive stone houses but I don’t think they were original and we had had enough excitement for one day at the famine cottage and the ancient burial site and any more and my head might have exploded before the car engine so we drove straight by.

Very soon we were at the most westerly point of the peninsula and could go no further and we were staring out at two thousand miles of water and next stop Canada and the USA.  At 10°27’ longitude Dingle claims to the most westerly town (as opposed to city – this is important) in Europe but whilst this may be true there are lots of other ‘most westerly’ claims to take into consideration.

When someone tells you that something is the biggest or the longest or the highest or the heaviest it is always worth checking up I find.  The most westerly point in Asia is Cape Baba in Turkey and in the United States it is Alaska which is also the most easterly as well because it stretches so far that it crosses right into the eastern hemisphere (a good pub quiz question that).

Another interesting fact about this place is that is was more or less the place where Charles Lindbergh crossed the Irish coast in 1927 in the Spirit of St. Louis in the first successful flight from New York to Paris.  I like this extract from his journals:

“I have carried on short conversations with people on the ground by flying low with throttled engine, and shouting a question, and receiving the answer by some signal. When I saw this fisherman I decided to try to get him to point towards land. I had no sooner made the decision than the futility of the effort became apparent. In all likelihood he could not speak English, and even if he could he would undoubtedly be far too astounded to answer. However, I circled again and closing the throttle as the plane passed within a few feet of the boat I shouted, “Which way is Ireland?” Of course the attempt was useless, and I continued on my course.”

From this most westerly point that we could go today we drove back inland along the north side of the peninsular which was not so scenic or dramatic and eventually the road returned us to Dingle and the hotel.

The weather was a real surprise.  I was expecting continuous rain and slate grey skies but it was warm and sunny and in the late afternoon we sat in the garden of the hotel with a glass of wine and watched the boats slipping in and out of the harbour in pursuit of Funghi the dolphin and enjoyed the peace and serenity of the verdant emerald countryside and the unexpectedly indolent ocean.

Later we walked along the coastal path back into Dingle to eat at a sea food restaurant next to the harbour and after an exceptional sea food platter we followed that with a visit to a gaily coloured pub where there was lively Irish music entertainment which went on way past normal closing time.

With no sign of the pub closing or the music stopping we called our own personal time and walked in the moonlight back along the coastal path to the hotel.  It was our last night in Ireland and while we walked along the moonlit path I wished that it had been our first!

21 responses to “Ireland, The Ring of Dingle, Famine, Immigration and Music”