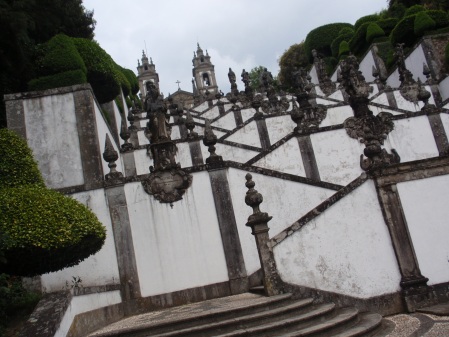 Not very original, I completely agree, but this is my picture of the challenge location…

Staying near Porto, the plan  was to drive north to the City of Braga and visit the park of Bom Jesus do Monte.

The present Sanctuary was begun in 1722, under the patronage of the Archbishop of Braga, Rodrigo de Moura Telles and under his direction the first stairway row, with chapels dedicated to the Via Crucis, were completed.  He also sponsored the next segment of stairways, which has a zigzag shape and is dedicated to the Five Senses of Sight, Smell, Hearing, Touch and Taste and each is represented by a different fountain.

Around 1781, Archbishop Gaspar de Bragança decided to complete the sanctuary by adding a third segment of stairways and a new church. The third stairway also follows a zigzag pattern and is dedicated to the Three Theological Virtues: Faith, Hope and Charity, each with its own fountain.

The old church was demolished and a new one was built following a neoclassic design by architect Carlos Amarante. In the 19th century, the area around the church and stairway was expropriated and turned into a park and in 1882, to facilitate the access to the Sanctuary; the Bom Jesus funicular was built linking the city of Braga to the hill.  This was the first funicular to be built in the Iberian Peninsula and is still in use today.

We stood at the top of the steps and debated whether or not to go to the bottom but after we realised that true penitent visitors climb them on their knees we agreed that a gentle stroll would be quite easy by comparison so we did just that and we were pleased that we did because the view from the bottom looking up the towering black and white stair case made it worth going to all the trouble.