Corfu, My Family and Other Disasters – Arrival 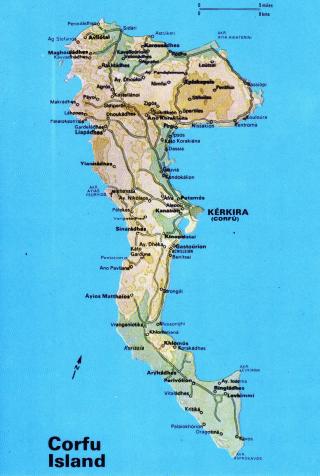 In 2004 I celebrated my fiftieth birthday with family on the Greek island of Santorini.  On the final night I treated everyone to a birthday celebration meal in a taverna and drank far too much Mythos Beer, Ouzo, and Metaxa Brandy and rashly declared that we would do the same thing in ten years time when I would be sixty.  I went to bed and promptly forgot all about it.

My children didn’t forget.  As 2014 got ever close they kept reminding me about the offer that I had made that night and so eventually I had no option but to deliver on the promise.  Sadly the Boss Bar in Santorini  closed down sometime between 2004 and 2006 and so I needed to find a suitable alternative and decided upon the village of Kalami on the island of Corfu which we had enjoyed a couple of years previously.

We were allocated seven seats on the plane, six altogether and one a row behind.  Kim thought she was being clever by bagging the solitary seat so she could stay away from the children and read her book in peace but I had to laugh when someone turned up and claimed the seat next to her with a small baby in her arms!  Luckily the flight passed by without incident.

The landing and arrival were just as I remembered them as the plane approached Cofu, shaped like a ballerinas balancing leg and over Pontikonisi Island, the home of the monastery of Pantokrator.  Then over the ‘chessboard fields’ of the Venetian salt marshes before landing on the freshly ploughed runway which gave everyone on board a rough welcome to the island and through the window I could see the same hopelessly inadequate buff coloured and tired airport terminal as the plane came to a gentle stop as the engines slowed from a high pitched whine to a gentle hum.

Passport control  was surprisingly chaotic with an unusual diligence not normally a feature of Greek border control and the line shuffled forward agonisingly slowly as the official at the desk took his time checking passports and ID until a second man came along, opened a gate and ushered us all through with only the customary glance at the documents that I am more familiar with in Greece and then, reunited with our luggage, we found the transfer coach ready to take us to Kalami.

At first the driver made slow progress through the growling traffic of the outskirts of the busy town with boxcrete apartment blocks with peeling facades, sagging washing lines and precarious balconies all decorated with satellite dishes and television aerials but eventually he nudged his way through the traffic and we were on the scenic coastal road that took us through Gouvia, Dassia and Ipsos and towards the mountainous north of the island where the road climbed in extravagant sweeping hairpin bends up one side of the coastal mountains and then dramatically down the other side.

It was late evening by now and the journey seemed to take forever, not helped by having to make a twenty minute detour to drop just two people off at a swanky hotel before having to double back to the main road to complete the journey.  Ordinarily this wouldn’t have been a problem but I was beginning to panic that as the minutes ticked by that the hotel shop might be closed and I would be unable to purchase essential supplies like milk for the children and (more importantly) Mythos for me!

I really shouldn’t have worried because we arrived a few minutes before ten o’clock and as we checked in the receptionist assured me that the shop was going to stay open for some time yet so we settled into our rooms and returned to the street to make our essential purchases.

Having been here before I knew what to expect – the rooms were basic with furniture held together with blu-tack and string, dodgy plumbing and only very basic facilities but this was more than compensated for by the magnificent view from the balcony which overlooked the crescent bay, shaped like a Saracen’s sword, pine fringed with limestone layer cake rocks, boats lolling in the languid water and the White House ‘set like a dice on a rock already venerable with the scars of wind and water’ of Lawrence Durrell.

Back in the land of ancient gods I felt immediately home and opened a bottle of Mythos to reassure myself that they hadn’t changed the brewing recipe and then we all wandered down to the seafront to our favourite beach side taverna, Thomas’ Place, where we plundered the menu for Greek specialities and began the holiday as we meant to continue before climbing back to our rooms and taking a last look at the night time vista before retiring to bed and looking forward to the next day.

During the night we experienced the downside of having a cheap and rustic studio apartment – it was incredibly loud!  The air conditioning chattered like a cicada, the fridge kept switching on and off with an ancient motor mechanism that sounded like a battering ram and every so often the shower head in the bathroom filled with water and discharged with a splash into the tray.  This was bad enough but worst of all were the beds, Kim’s croaked like a frog every time she turned over and mine quacked like a duck every time I moved and eventually after a disturbed night we were very glad that it was morning and we could start the holiday.

10 responses to “Corfu, My Family and Other Disasters – Arrival”