Corfu, My Family and Other Disasters – Assessment

I had visited Corfu almost thirty years ago but although on that occasion I toured the island from north to south and from east to west I came as a holidaymaker rather than a traveller and I saw everything but didn’t see anything.

This second visit to Kalami in as many years continued to nudge my memory and from what I can remember it hasn’t really changed a great deal at all – the Venetian elegance of Corfu town, the lush green vegetation of the interior, the twisting roads, the soaring mountains, the views that so enchanted Edward Lear and Henry Miller, The limestone ribbed bays where we spent our lazy days were all very much as I remembered them now and suddenly it didn’t really matter that I hadn’t paid attention to these details all those years ago because now my head and my camera were full to overflowing with all these unchanged images.

In my opening Corfu post I mentioned that I had prepared for the visit by reading Gerald Durrell’s ‘My Family and Other Animals’ which forms a sort of Corfiot trilogy alongside brother Laurence’s ‘Prospero’s Cell’ and Henry Miller’s ‘The Colossus of Marousi’  all written about many of the same places, and often the same people, but from very different perspectives. 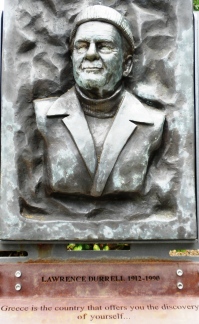 Lawrence and his wife Nancy lived some distance away in Kalami in the White House and curiously Gerald doesn’t even mention her once in any of his Corfu books possibly because they were written twenty years after the event and Lawrence and Nancy were long since separated and divorced.

The White House claims an association with younger brother Gerald but it seems he never lived here at all.  In fact it is entirely possible that he never even visited the place because Perama is over forty kilometres away and eighty years ago there were no asphalt roads or cars or even public transport that would have made an afternoon visit comfortably possible. 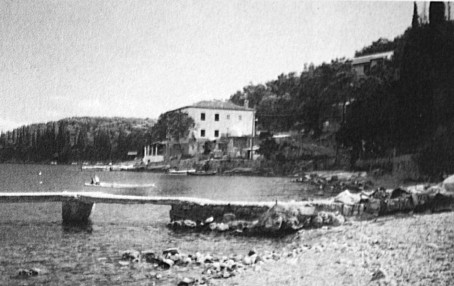 Gerald it seems was prone to extreme exaggeration and although his books are entertaining they miss the truth by a mile.  Actually I tired of them.  I enjoyed the first but the second was written when Gerald was in his fifties and had clearly lost touch with his childhood and with reality and I gave it up half way through.  He said himself that he didn’t enjoy writing them and only did so to make money to finance his naturalist expeditions and this I am afraid is blindingly obvious.

I much preferred the work of Lawrence with his sublime descriptions of life in Corfu (and equally curiously he doesn’t ever mention the other members of his family who lived here at the same time), a diary of vivid memories that for me at least bring the place to life.  How wonderful it must have been to live in this place all that time ago and experience a life of bohemian indulgence.

Sadly the truth turns out to be that Lawrence was a misogynist, a bully and an abuser and the idyllic life he describes may only have been spasmodic or one sided.  Henry Miller refers at one point to ‘black eyes for breakfast’.  I find it a shame that a man who could write such elegant prose should also have such a darker, unpleasant side.

As for Henry Miller – I found the ‘Colossus of Maroussi’ rather self-indulgent and heavy going but whilst I have abandoned Gerald Durrell I will return to Miller.

I have one last comparison to make.  For ten years I have been in the habit of visiting the Cyclades Islands, specks of volcanic rock in the space between mainland Greece and Turkey and have gleefully declared them my favourites but now that I have been reunited with the Ionian Islands I have to reassess this opinion.  In ‘Prospero’s Cell’ Lawrence Durrell describes the sighting of a Cretan boat in the bay of Kalami and this seems to me to sum up perfectly the difference:

No words of mine could improve on that wonderful comparison of the harsh, barren Cyclades and the soft, abundant Ionian.   So which do I prefer – impossible now to say, perhaps it may even be neither but the Dodecanese instead which is where I am bound for next.

Read here about all my Greek Island visits… 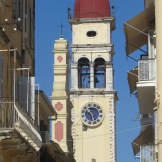 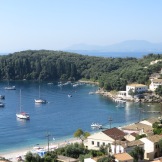 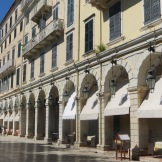 5 responses to “Corfu, My Family and Other Disasters – Assessment”