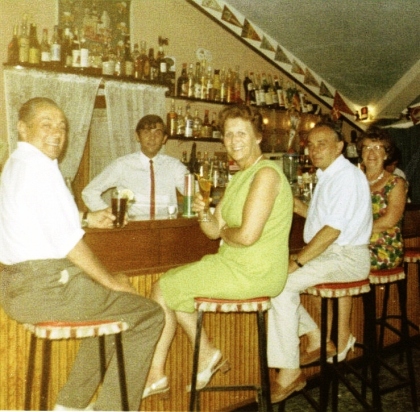 “It was not only in Farol that brusque changes were taking place…they were happening at a breakneck pace all over Spain…. Roads, the radio, the telephone and now the arrival of tourists… were putting an end to the Spain of old.  And for those who wanted to see it as it had been, there was not a moment to be lost.”  –  Norman Lewis –  ‘Voices of the Old Sea’

In the photograph my grandparents Ernie and Olive were roughly the same age as I am now and they were clearly having a very good time sitting at a bar enjoying generous measures of alcohol, the same sort of good time that I like to enjoy when I go travelling.

I am guessing of course but Granddad, who looks unusually bronzed, seems to have a rum and coke and Nan who looks younger than I can ever remember her appears to have some sort of a beer with a slice of lime and that’s about forty years before a bottle of Sol with a bit of citrus became anything like fashionable.

6 responses to “Every Picture Tells a Story – Benidorm c1960”