Malta, Mosta and the Miracle of the Bomb

Leaving the unfortunate Fontanella Tea Rooms we were pleased to see that the weather was back to its spectacular best so we walked around the streets some more and made our way to the biggest building in Mdina, St Paul’s Cathedral standing erect and proud next to a section of the old city ramparts.

It was an interesting if not especially memorable Cathedral and after a short while we returned to the honey coloured streets and resumed our search for an alternative refreshment stop.  This didn’t take long and we found a tea room in a secluded courtyard which was no way near as busy as Fontanella but we soon found out that this was on account of the cakes not being anywhere near as good.

Mdina is quite small and we soon found ourselves going down the same streets as just an hour or so ago so we headed for the main gate exit and returned to the bus stop.  It was ten to three and the bus was scheduled for five past.  Ten past came and went, twenty past, half past, I found an inspector who suggested that it might be stuck in traffic (bus inspector’s first excuse every time I expect) and then when one did turn up it turned its destination light off and replaced it with ‘not in service’.  Malta now has a seriously bad bus service so we broke a golden holiday rule and together with another equally frustrated couple reluctantly agreed to take a taxi. 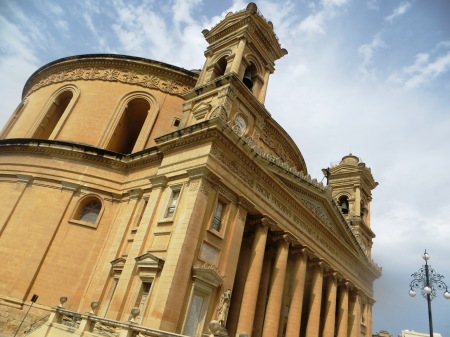 Mosta Church and the Miracle of the Bomb…

The next stop was at Mosta, for no better reason than to visit the Cathedral which was built in the nineteenth century and has a dome that is among the largest in the World – in fact (and you do have to be careful about these sort of facts of course) it is the third largest in Europe and the ninth largest in the World.  You can believe that or believe it not but the most remarkable thing about the Mosta Dome is the miracle of the unexploded bomb.

During the Second-World-War it is claimed that Malta was the most heavily bombed place in the World and on April 9th 1942, during an afternoon air-raid, a Luftwaffe bomb pierced the dome (two others bounced off) and fell among a congregation of more than three hundred people attending early evening mass. It did not explode. Apparently it rolled down the aisle and into the street outside so it was a good job that the doors were open!

I suspect that that part of the story may not be completely accurate and has been embellished and corrupted by the passing of time but this is the way they like to tell it.  I am sceptical if only for the reason that with a bomb crashing through the roof I imagine that there would have been quite a lot of panic and congestion in the aisle as people rushed for the door.  There would have been a mad dash and a tangle of bodies that would make modern day bus stop queues look like a Royal Garden Party and the bomb would be most unlikely to get through.

One version of this event states that when a bomb disposal squad opened the device it was found to be filled with sand instead of explosives and contained a note saying “greetings from Plzeň” from the workers at Škoda Works in the German-occupied Czechoslovakia who had allegedly sabotaged its production.

A nice story but not necessarily true.

To be frank there is nothing else to see in Mosta so we made our way to the bus stop and prepared for another fight to get onto the bus.  Sure enough there were far more people waiting than there could possibly be available seats but eventually it arrived and somehow the driver managed to squeeze us all on board.

This was a very uncomfortable journey and it was about now that I thought that it might be appropriate to make alternative arrangements for the journey back to the airport the next day.  I might be adventurous but I am not completely reckless and was not prepared to take the risk that the bus wouldn’t turn up or if it did that it would be full and wouldn’t stop or that I might lose my luggage on a chaotic journey.  Back at the hotel I booked a taxi which was expensive at €30 (ten times as expensive as the bus) but was worth it for peace of mind.

It was the last evening so we took a walk to the beach, sat on the balcony and played cards and then just for a change went to our favourite restaurant in Malta.  Later we went to the Limelight Lounge again to snigger at the entertainment and then we returned to the room to pack.

17 responses to “Malta, Mosta and the Miracle of the Bomb”