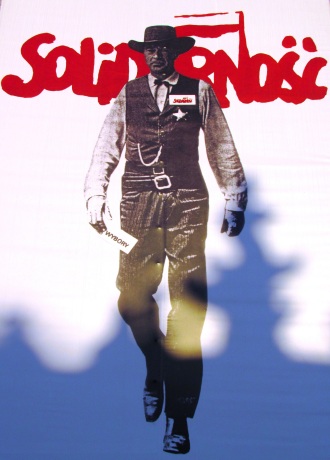 In 1989 there were some partially free elections in Poland and this was the official poster of the Solidarity movement and it shows Cooper armed not with a pistol in his right hand but with a folded ballot saying ‘Wybory’ (elections)  while the Solidarity logo is pinned to his vest above the sheriff’s badge. The message at the bottom of the poster reads: “W samo południe: 4 czerwca 1989,” which translates to “High Noon: 4 June 1989.”

“It was a simple but effective gimmick that at the time was misunderstood by the Communists. They tried to ridicule the freedom movement in Poland as an invention of the ‘Wild’ West, especially the U.S. But the poster had the opposite impact: Cowboys had become a powerful symbol for Poles. Cowboys fight for justice, fight against evil, and fight for freedom. ”

In 1953 Gary Cooper won the Best Actor Oscar for High Noon and in 1990 Lech Wałęsa became President of Poland.