Chips, Crisps or Fries – How Do You Eat Yours?

“Everything comes with chips, which are French fries. You put vinegar on them.  Cookies are biscuits and potato chips are crisps” – Scott Walters

Just a short time ago I wrote a post where I speculated on the origin of the humble dish of potato chips or, depending upon dining or geographical preference, French fries.  There were an unusually high number of comments  and responses (more than two) so blatantly exploiting unexpected success I thought I would follow it up and carry out some more research and punctuate the results with some personal reflections.

The post was my report on eating fried potatoes in a Friterie in Northern France so it is only really polite to start with our nearest continental neighbours.

Friteries are a feature of this part of northern Europe and are a simple place, usually outside on wooden benches, to buy and eat French fries accompanied by a selection of traditional sauces and accompaniments.  The thin strips of potato are fried twice, first to drive out the moisture and second to achieve the essential golden crispness of the French Fry.

You might expect the French, along with close neighbours the Belgians and the Dutch to know a thing or two about chips and they do make a good job of cooking them it has to be grudgingly said but as soon as they are served up they demonstrate a total lack of culinary style and taste. 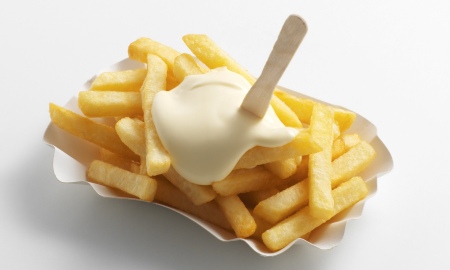 They immediately apply a dollop of horribly sloppy mayonnaise!

Now mayonnaise is fine on lettuce leaves or as an ingredient in a McDonalds burger, it gives them a bit of taste after all, but it really shouldn’t be smeared all over a helping of lovingly prepared  potato chips and I am reminded here about a scene from the film Pulp Fiction and a conversation between Jules and Vincent…

In Holland they do unspeakable things to the chip – They serve patatje oorlog which translates as “war chips” and is a toxic combination of French fries, mayo, raw onions and Indonesian satay sauce! What?

However, if you think that is bad then let’s cross the River Rhine into Germany where they serve up a variation called pommes rot-weis (potatoes red and white) named rather unimaginatively it is said after the colour scheme on level-crossing barriers and this toxic combination is achieved by smothering the poor chips in not just the evil mayonnaise but a good slug of tomato ketchup for good measure which has the effect of turning the classic dish into a sort of Salvador Dali gastro-interpretation.  I don’t know about the colour of level crossing barriers more like the rags and blood of a barbers pole if you ask me.

As I mentioned in my previous post Spain makes a creditable claim to be origin of chips so let’s head south now across the Pyrenees into Iberia.

Spain has patatas aioli which is a mayonnaise with garlic and having already dismissed mayonnaise as inappropriate then the addition of the foul tasting noxious onion bulb is not going to improve it one taste bud notch in my opinion; and then there is patatas bravas with a spicy sauce whose ingredients vary from region to region. Generally I am a big fan of Spanish Tapas but my recommendation would have to be to avoid the patatas bravas at all costs.

I have two issues with them. First of all they don’t even look like chips and instead of being long and slender they are served in solid lumps of fried potato and secondly the bravas sauce is often so fierce that it completely spoils the dish all together and you can add to that the fact that it frequently (depending on region) includes a whole host of odd ingredients such as chorizo, baked chicken or fried fish, none of which in my opinion should be anywhere near a sauce for simple chips –  if you want to muck about with vegetables then stick to pumpkins at Halloween.

And in other weird combinations in street food shops…

Nearby Italy shouldn’t really be featuring because they don’t really do chips or fries.  There is an awful lot of street food in Italy but this is mostly pizza and deep fried rice balls.  I did come across this food stall in Naples which sold all sorts of fried food served in a brown paper cone and one of the options was fried potatoes which looked more like English chips than French Fries.

I am not going to score the Italians because that wouldn’t really be very fair.

Hastily retreating to the United Kingdom I am first going to head north to Scotland despite the fact that Scots deep fry chocolate so cannot really be taken seriously in matters culinary.  In Glasgow and Edinburgh they have a fondness for gravy with chips and I find that odd because in my culinary opinion gravy should only really be served up with the weekly Sunday roast. 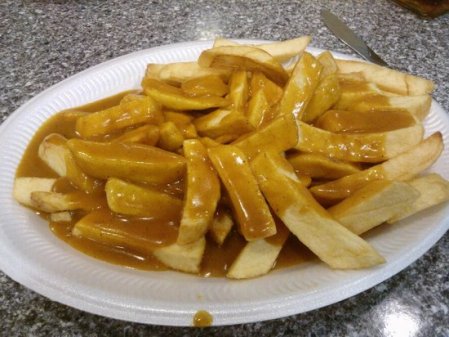 Having said that it is really rather tasty and my grandchildren like it served that way so marks out of 10 for the Scots – 7.

Which brings me back rather neatly to England and especially my home town, the fishing port of Grimsby.  They know a thing or two about chips in Grimsby let me tell you and there is a chip shop in every street – sometimes two and people there know best how to cook them and to eat them.

Never mind the fancy restaurant trend for twice or even thrice fried potatoes they just cut them up and sling them in a vat of boiling fat or preferably beef dripping and then serve them piping hot and crispy on the outside with delicate fluffy middles with the only two accompaniments that chips really need – a generous sprinkle of salt and lashings of good vinegar.  No mayonnaise, no gravy, no tomato sauce and definitely no curry!

So what about the USA and Canada you might ask.  Well to be honest I have dismissed the New World completely.  Is that fair?  I think so.

Whilst I am prepared to concede that they know how to prepare French Fries in McDonalds and other similar places the bottom line is simply this – they don’t even know what chips are, they think they come in a foil packet.   Americans and Canadians please take note – these are not potato chips they are potato crisps!

Anyway marks out of 10 for the North Americans – 0.

This might seem a little harsh but the rules are that you have got to compare chips with chips.

Anyway, enough of all this, let me tell you my favourite.  In this picture taken in France my mum has gone for the tomato ketchup option and is wagging her fry around to prove it.  Alan has kept things simple and luckily is not wagging his fry at anyone, my brother Richard, who has a bit of a reputation for wagging his fry, has gone for the classic salt and vinegar combo and although I am not in the picture (obviously I was taking it) you can clearly see my preferred accompaniment is a bottle of cold beer – just don’t mistake it for the vinegar and pour it over the chips!

So, over to you, How Do You Eat Yours, what is your favourite accompaniment?