More About Chips, Crisps or Fries (and Bananas)

In my last post I raised the issue of chips/crisps/fries and preferences for eating them.  This reminded me of my dad who liked chips but absolutely never came to terms with eating them in a bread bun…

I will get onto chips in a minute but I just want to talk a little bit about bananas. It seems almost impossible to believe but it was only in 1954, the year that I was born, that war time food rationing was only officially ended a couple of weeks later on July 4th.

It began in January 1940 when bacon, butter and sugar were rationed and this was followed soon after by meat, tea, jam, biscuits, breakfast cereals, cheese, eggs, milk and canned fruit.  As the Second World War progressed, most kinds of food came to be rationed along with clothing and petrol.

I mention this because the very last food item to be released from the shackles of rationing in Britain were bananas, which for me is quite a significant fact.  My Dad loved bananas and I could never quite understand why but I suppose he was only twenty-two in 1954 and hadn’t had the pleasure for fifteen years and in fact it is quite possible I suppose that he had never had a banana before in his life.

Interestingly, fish and chips were considered so important during the Second-World-War that it was one of only a very few food items that were never rationed.

The return of the banana was hailed as heralding an end to austerity and to the curse of the ration book.  The Labour government even instigated a national banana day in 1946.

This was only a one year event but in the USA they continue to this day with several banana themed days – February 23rd Banana Bread Day, March 2nd Banana Cream Pie Day, August 25th Banana Split Day and most important of all, April 15th National Banana day!

The USA also has some other weird food days – July 15th National French Fries Day, even though they don’t know the difference between chips and crisps and most odd of all National Hot Cross Bun Day on September 11th.  Now, I know that Easter is a moveable feast but I don’t believe that it has ever fallen as late in the year as September!* 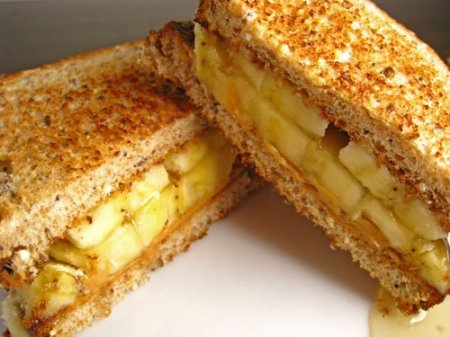 My dad liked all sorts of strange banana combinations, weirdest of all being banana sandwiches on brown bread with sugar, but he was also very fond of chopped bananas in custard.  Personally I’ve never been that keen on bananas at all but this rationing fact explains a lot about my dad’s unusual dietary preferences.

Once a week we all had to have bananas for a pudding until one day when I was about fifteen I could take it no longer I planned a teenager protest and I refused to eat them.  It was the only time I can remember him getting really upset with me but I stood my ground even though he severely chastised me and wouldn’t let me leave the table.  I continued to stubbornly refuse them and eventually I think I wore him down and he ate them up for me because he liked them so much. That is what you call a win/win result!

Now, getting back to chips and the point of the story because at about the same time as he was gorging banana sandwiches dad used to turn his nose up at a chip butty and found this quite unacceptable, which for a man who would slap a banana between two slices of bread and put sugar on it was always a mystery to me.  He would have a slice of buttered bread with his chips but the idea of making a sandwich he considered rather common!

So, in response to the comments received after my previous post I started to think about all the other chip combinations that he would disapprove of and I think his top five would be:

4  Chips in foil packets (because these are crisps)

but most of all, and thank you to my friends in Canada for this one…

5  Poutine with curds of cheese and gravy

…this is Poutine from Canada…

When I first heard of this I was convinced that it was some sort of wind-up, but apparently not, you can even get it in McDonalds, but thankfully only in Canada… 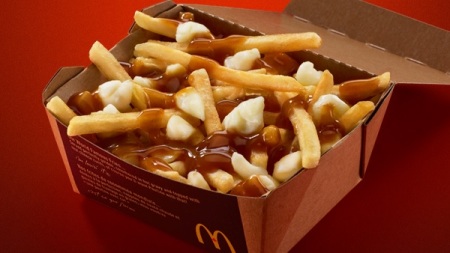 So, now please tell me about any of your own dining peculiarities or personal favourites?

*The timing of Easter seems somewhat confusing because it is termed a moveable feast that is not fixed in relation to the civil calendar as for instance is Christmas Day or my Birthday.

Easter falls at some point in a thirty-five day period sometime between late March and late April each year and the exact date is determined by the cycle of the moon.  After several centuries of disagreement, and prompted by the Roman Emperor Constantine in the year 325 to sort things out, all churches accepted the basis of the Alexandrian Church that Easter is the first Sunday after the first fourteenth day of the Paschal Full Moon that is on or after the ecclesiastical vernal equinox.  To you and me this is the first Sunday after the first full moon following the spring equinox which is that moment in time when the centre of the Sun can be observed to be directly above the equator.

41 responses to “More About Chips, Crisps or Fries (and Bananas)”