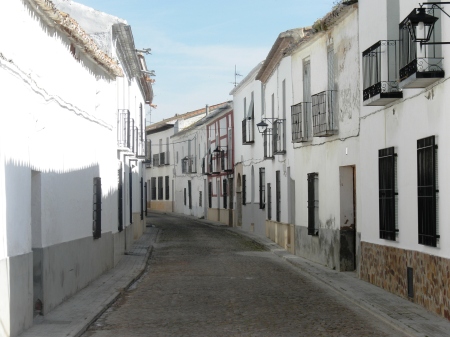 “Don Quixote is the national glory of Spain.  No one who does not know that has the right to call himself a Spaniard.  There is a monument to him in Madrid…he was our first revolutionary.” – Gerald Brenan,  ‘South from Granada’ 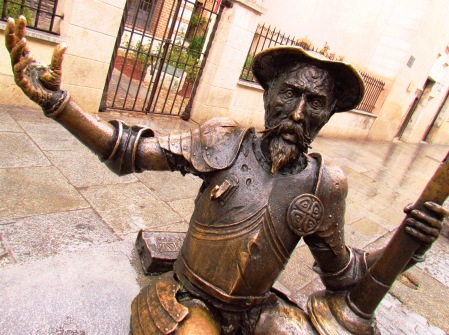 After four days of travelling, eight-hundred kilometres driving and some serious sightseeing, today we were planning an altogether less demanding sort of experience with a leisurely full day in the provincial town of Almagro.

Breakfast at the Retiro del Maestre was simply wonderful and easily the best of the week, in fact, if we were compiling a list of the top five hotel breakfasts ever then this would certainly be in there.  It was the usual thing in terms of content but it had clearly been lovingly prepared by the ladies of the house and the cook fussed around the breakfast room, making recommendations, making sure everyone was happy and brazenly fishing for compliments.  And she deserved them all because this was truly an excellent breakfast.

Almagro is an old town that was once much more important than it is today, two hundred and fifty years ago it was for a short time the provincial capital of La Mancha (1750-61) but religious decline set in during the reign of Charles III and it fared badly and suffered damage in the Napoleonic and the Carlist wars.

Eventually it was eclipsed by its neighbours, Ciudad Real and Bolaños de Calatrava and it became the quiet town that it is today on, not being unkind, a secondary, less important, tourist trail.

Talking of trails, as we stepped out into the street we were now inevitably on the ‘Ruta de Don Quixote’, which is the golden thread that binds the Castilian tourist industry together in a ribbon of towns, castles and windmills stretching from Cuenca to Toledo.

Don Quixote is a novel written by the seventeenth century Spanish author Miguel de Cervantes Saavedra and is regarded as the most influential work of literature to emerge from the Spanish Golden Age.

It is the story of a man who believes that he is a knight, and recounts his adventures as he rights imaginary wrongs, mistakes peasants for princesses and  famously “tilts at windmills,” mistakenly believing them to be evil giants.

As one of the earliest works of modern western literature, it regularly appears high on lists of the greatest works of fiction ever published.  In 2002 a panel of one hundred leading world authors declared Don Quixote to be the best work of fiction ever written, ahead even of works by Shakespeare, Tolstoy and Dostoyevsky.  Cervantes has also been credited with shaping modern literary style, and Don Quixote has been acclaimed as “the first great novel of world literature”.

Since publication in 1605 it is reputed to be the most widely read and translated book on the planet after the Bible. I tried to read it once or twice but found it rather heavy going so gave up quite quickly but as we walked along I resolved to give it another go upon returning home. 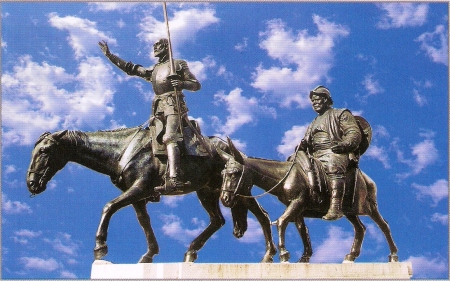 The historical centre of Almagro is conveniently located inside a circle of modern roads so this morning we circumnavigated it all as we walked through surprisingly wide and airy streets with the ubiquitous boxy white houses with little balconies and ornamental black iron grills over the windows where much of the town has been redeveloped to accommodate modern living demands.

Along the route there were churches, a wide open park and a convent, now inevitably converted to a Parador hotel.  We went inside to take a look but Parador room and menu prices are not really for us so we weren’t tempted to stay and instead made our way back to the Plaza Mayor.

Although it was midday it was quiet in the Plaza as we selected a table for a refreshment break and we watched restaurant owners preparing for what they hoped would be a lunch time rush and then we looked around some of the traditional local craft and souvenir shops and then the not so traditional Mercadona (Spanish Supermarket)  for some essential alcohol supplies because our plan now was to return to the hotel and spend the afternoon relaxing in the sun on the roof terrace.

As the sun moved from east to west in the sky we let the afternoon slip away with a bottle of local wine, a game or two of cards and a couple of chapters of our books but after a while some cloud was beginning to gatecrash the party sky and gradually it turned from azure blue to milky white as the sun was completely blotted out.

The wine bottle was empty and this was our cue to leave the terrace and return to the town for the final piece of sightseeing.

This was the Corral de Comedias, which is a sixteenth century theatre, similar to those that Shakespeare would have been familiar with in Elizabethan England, built in what was the courtyard of an Inn and which today is the only fully preserved example of a theatre of this type in the World.

It is a working theatre still today and inside it is an immaculate example of a theatre of the golden age, built on three levels with galleries and private boxes running around all three sides of the still open courtyard.  It was an unexpected little gem but it didn’t take long to walk around and listen to the audio commentary so after we had finished we stopped for a coffee and compiled a shopping list of souvenirs that we could confidently carry back in our hand luggage and agreed on some local pottery and some water colour postcards of the main sights of the town.

There was time for a few more early evening minutes on the terrace but the weather was continuing to deteriorate and worryingly the hotel staff were beginning to prepare for bad weather by collecting up the cushions and winding in the sun shades that were no longer needed and this disappointed us but to be fair, given the pessimistic forecast before we arrived in Spain, we had been lucky all week so far with the weather.

It had been a good day in Almagro and after dinner and before returning for the final time to the hotel we strolled one last time through the Plaza and had a final drink in a busy bar that was full of extended Spanish families all starting the weekend here in the square. 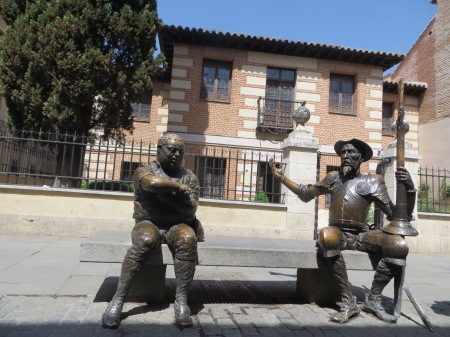 33 responses to “Travels in Spain – The Ruta de Don Quixote”