Beverley, East Yorkshire – A Minster and a Parish Church 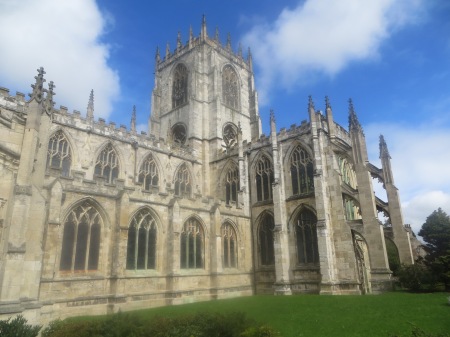 The ‘Georgian Quarter’ is not a huge area, the main road ‘North Bar Within’ is barely two hundred yards long but it has been well preserved and is flanked with elegant town houses with handsome front doors with gleaming brass furniture.

It is rare that one small town boasts two wonderful historic churches, but that is the case for the East Yorkshire town of Beverley. The most famous of the two is without doubt Beverley Minster, a wonderful monastic church but at the other end of town, just inside the last surviving medieval town gate, stands the glorious medieval church of St Mary.

Sir Tatton Sykes, prolific nineteenth century church restorer, once famously remarked that the west front of St Mary’s was ‘unequalled in England and almost without rival on the continent of Europe’. Now, Sir Tatton may be forgiven for seeing the church with the rose-tinted spectacles of local enthusiasm but the truth is that St Mary’s is a beautiful church, and must surely warrant inclusion in any list of the great parish churches of England.

We had come to see the Minster of course but finding ourselves outside the church it seemed rude not to pay a visit and we were soon very glad that we did.  It is an eye-catching structure from outside and the doorway is framed with stone carvings of gargoyles with scary faces and bulging eyes but once past the ugly bug invitation committee we passed into an elaborate and sumptuous interior which is in contrast to the normal austerity of Anglican churches.

Inside the church is a treasure chest of stained glass windows, two magnificent ceiling paintings, one of the constellation of stars and another of Anglo-Saxon Kings of England and a trail of stone carvings that requires a printed map to try and find them all.  Most famous of all is perhaps the carving of the March Hare, a rabbit dressed as a Pilgrim and said to have inspired Lewis Carol’s Alice in Wonderland although I can find no real evidence to support that particular claim.

We spent half an hour or so in the Church which too be fair was long enough for Kim and Pauline because they now had plans to visit the shops.  I may have mentioned before that I am not a big fan of shopping and today I was ably supported by my friend Richard.  The trouble with English towns is that they all have the same shops, there is practically no individuality in the town centres.  Every shop that I can expect to find in my home town could also be found here.  These are not shops that interest me a great deal in Grimsby so it was completely unlikely that they would do so here in Beverley.

Even worse than this however is the fact that town centre shops are in decline and just as in every other English town there is an over-supply of banks, building societies and pay day loan money lenders.  The trouble with financial service providers is that they simply cannot make their window displays interesting and except for a different logo all they can display is a list of lending and savings rates most of which are much the same anyway.

To be fair there were some local shops here in Beverley and two iconic WH Smiths bookshops (Grimsby WH Smiths closed down in 2015) but nothing that was so interesting that it would get me through the door.  I was more interested in the road surface.  Beverley market place has traditional cobbles and in 2013 there was a lot of controversy when the local council wanted to tear them up and replace them with modern block paving in the interests they said of health and safety.  Luckily the residents of the town were having none of it, there were howls of protests and eventually the council was obliged to back down. 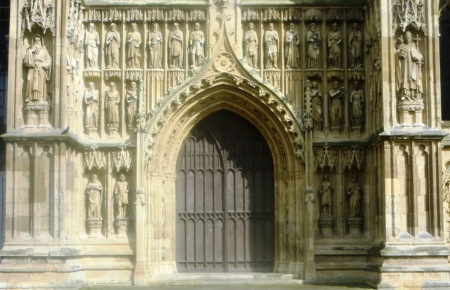 After lunch in smart little town centre café we made our way now along busy streets with buskers and street entertainers until we reached the Minster.  A magnificent Gothic structure which towers over the whole of the town.  Inside there was some music, an organ recital and we were told that we could only go in by paying £5 to listen to it.  That was enough for Kim and Pauline to abandon the plan straight away and return to the shops but Richard and I were assured that it would finish in five minutes and then we could go in for nothing.  Like true skinflints we decided to wait!

Minster is an honorific title given to particular churches in England most usually those that have been associated with monastic life sometime in the past.  Church hierarchy is a complicated matter because a Minster falls between Church and Cathedral but can confusingly stray either way.  Beverley Mister is a Church but thirty miles away York Minster is a Cathedral.  Beverley has a Bishop but he is based in York.  In London, Westminster is a Cathedral and an Abbey and a Minster and down the road there is a Roman Catholic Cathedral of the same name.

It is an impressive building for sure and inside there are soaring columns, high vaulted windows, chapels and tombs but decoration is sparse and compared to St Mary’s Church it seemed strangely austere and functional.  We stayed for a while until we were spotted taking photographs without a permit (£3) from which we were excused when Richard pointed out that he had spent an exaggerated £15 in the gift shop and then we left.

By now it was late afternoon so we returned to the market to collect our garden ornament purchases and then we left Beverley and made our way back to the Humber Bridge.

20 responses to “Beverley, East Yorkshire – A Minster and a Parish Church”