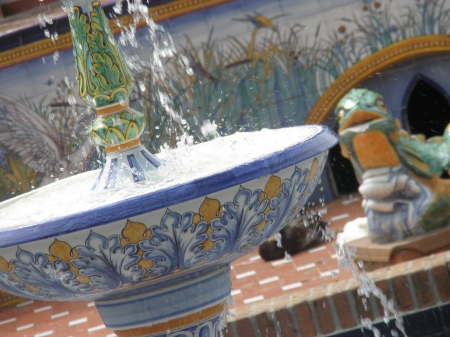 With an ambitious objective to visit all of the regions of Spain and already travelled to the more obvious places such as Andalusia, Castilla-La Mancha and Castilla y Leon it was time this visit to be more adventurous.

I have excluded from that short list places such as Galicia, Cantabria, The Basque Country and Catalonia because although we have been there I have become aware that these, although part of the state of Spain, are not really Spain at all and something quite separate and different.

On this occasion we choose Extremadura to the south-west of Madrid, which the guide books claimed to be the least visited part of the country.  With no convenient international airport in the Province it was a choice between Seville or Madrid and the best available flights were to the capital about three hundred kilometres away and a long drive from the cities of Cáceres, Trujillo and Mérida.

In the week before the journey the BBC had been promising rain and cloud which was disappointing so we packed appropriately with rain coats and umbrellas and when we took off from Luton Airport on an early morning flight the sun was beginning to rise in a blue sky and we became resigned to leaving good conditions at home and flying into colder, wetter weather.

Across the United Kingdom and the Bay of Biscay the weather remained clear and then we crossed the coast of Spain somewhere near Santander and we could see the snowy peaks of the Picos de Europa mountains and the plains of Castilla y Leon and it appeared that we may have been unnecessarily pessimistic but then as we approached central Spain and Madrid the clouds began to build over the mountains and it looked as though for once the weather forecasters were correct.

By the time we reached Madrid however there was improvement and after we had landed and made our way through arrivals and completed the car hire formalities the sun was winning the competition with the clouds for control of the sky and encouraged by this we left the airport and began our journey west.

In anticipation of rain we had an alternative plan to drive via El Escorial and visit the Royal Palace but we had been there before and with the sun shining we stuck to our original plan to drive to the city of Talavera de la Reina in the north of the Province of Castilla-La Mancha.

It was about one hundred kilometres for this first leg of the journey and the Autovia was practically empty so we enjoyed a trouble-free, toll-free ride all the way to the city, which, with the help of the satnav lady navigator we found easily and parked the Volkswagen Polo in a convenient underground car park close to the centre. 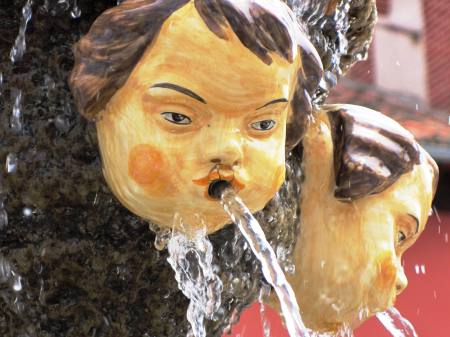 Talavera de la Reina is a city in the western part of the province of Toledo and is the second-largest centre of population in Castile-La Mancha (after Albacete) and the largest in the province, larger even than the city of Toledo itself, although the more famous city naturally remains the provincial capital.  This means that to a certain extent Talavera is a city with an inferiority complex and this isn’t helped by the fact that it isn’t really a primary tourist destination but we are keen to visit as many Spanish cities as possible and we were not going to exclude it from our itinerary.

We emerged from the underground car park into the heart of the city park where there were fountains and statues and leafy walks leading to the Basilica del Prado where we walked and then became confused while looking for the city centre.  It was lunchtime and we were hungry so we quickly reoriented ourselves and then confident about the direction of travel made our way to the city centre where in one of the busy satellite squares we found some tables in the sun and enjoyed a tapas lunch.

During the fifteenth and sixteenth centuries, Talavera achieved great recognition, thanks to its ceramics. Wonderful pieces of pottery and Talavera tiles are found in the main museums of the world and in the most luxurious palaces all over Europe.  The city is internationally known for its products, which King Philip II used as tiled revetments in many of his works, such as the monastery of El Escorial.  The nickname of Talavera de la Reina is ‘The City of Pottery’ and Mexico’s famous Talavera pottery was named after the place.  We could have guessed this because after lunch we walked through the old city towards the River Tagus and our route took us past a succession of similar ceramics workshops and shops. 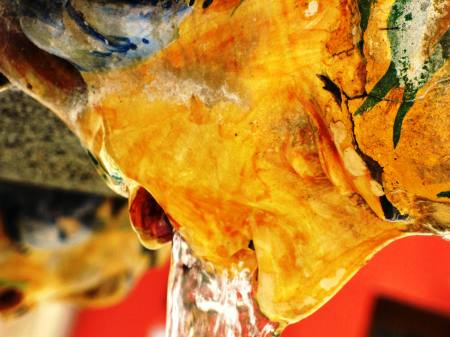 Eventually we reached the river which is the longest in the Iberian Peninsula and the twelfth longest in Europe.  It is just over a thousand kilometres long and flows all the way to Lisbon in Portugal where it finally empties into the Atlantic Ocean.  Along its course there are several dams and diversions supply drinking water to most of central Spain, including Madrid, and Portugal, while dozens of hydroelectric stations create abundant power.

The source of the Tagus is the Fuente de García, in the Montes Universales, Sierra de Albarracín Comarca.  The main cities it passes through are Aranjuez, Toledo, Talavera de la Reina and Alcántara in Spain, and Abrantes, Santarém, Almada and Lisbon in Portugal.

The water was brown and dirty and flowing freely, swollen by all the recent rain that had fallen and the water gnawed at the banks and created muddy whirlpools in between the reeds and we walked alongside it for a while back in the general direction of the car.

The sun was hot now by mid-afternoon and the sky was cloudless so instead of leaving straight away we stopped for a drink in a little café in the park where we had a beer and thanked the BBC for getting the weather forecast wrong as usual! 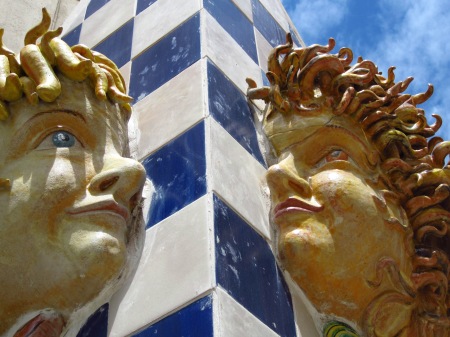