My visit to and post about Alcalá de Henares and the forty-four UNESCO World Heritage Sites in Spain (Second highest to Italy at forty-nine) made me stop and think about the comparison with the list that I reviewed recently of the “Twelve Treasures of the Kingdom of Spain” which was a contest/poll that was conducted by the Spanish Television Company Antena 3 and the radio broadcaster Cope.

I have set out the full list of World Heritage Sites below including links to the twenty-two that I have visited.  The sites are spread across the entire Iberian Peninsula but of the Autonomous Communities, Catalonia, at a crossroads of European culture, and Castilla y Leon, the largest by area, have the most with six sites each.  Aragon, Asturias, Basque Country, La Rioja and Murcia have only one each but of all seventeen regions Navarre in the north of the country is the only one that doesn’t have any at all.

In 2005 I went to Barcelona in Catalonia and saw the works of Antoni Gaudi, Palau de la Música Catalana and the Hospital de Sant Pau. Then in 2008 I saw the Historic Centre of Cordoba, the Caves of Altamira in Cantabria, the Old Town and Cathedral of Santiago de Compostella  and the Alcázar and Archivo de Indias in Seville.  In 2009 in the motoring holiday around Castilian cities it was the Old Town of Segovia and its Roman Aqueduct, the Walled Town of Cuenca, the Historic City of  Toledo and the Old Town of Ávila.  This trip in 2011 added Cáceres, Mérida and Aranjuez.

In 2011 on a driving holiday in Catilla y Leon I added Salamanca and Burgos and earlier this year the Alhambra Palace in Granada. 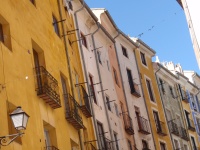 Even before I knew anything about World Heritage Sites it turns out that I have visited two more in the days of my beach type holidays.  Although, to be absolutely fair, when I went to these places neither of them were yet on the list.

In 1988 I holidayed on the island of Ibiza which was accepted onto the list in 1999 in recognition of its biodiversity and culture and the following year I went to Tenerife and took a cable car ride to the top of Mount Tiede, a national park that was accepted to the list in 2007.

Even though they weren’t World Heritage Sites at the time I visited them I am still going to count them but the final one might be a bit dubious – but anyway here goes.  In 2008 while visiting Santiago de Compostella I managed to drive over parts of the Pilgrim Route, which exists on the list separately from the old city itself.

As well as the indignity of having no World Heritage sites poor old Navarre doesn’t have a coastline, no international airport or a direct link to the Spanish high speed rail infrastructure.  Maybe the city of Pamplona needs to start working on a bid to UNESCO for the next round of qualifying.

The full list of World Heritage Sites in Spain is…

Like UNESCO, the “Twelve Treasures of the Kingdom of Spain“…

didn’t include any entries from Navarre but had the most (three) from Andalusia.  Interestingly it only included four World Heritage Sites in its list, Cordoba, Seville, Altamira Caves and Santiago de Compostela.

In response to the official list of winners I produced my own alternative list, six of which shared a place on the UNESCO list, Salamanca, Avila, Cuenca, Aranjuez, El Escorial and the works of Antoni Gaudi but also like UNESCO and the Spanish TV viewers I didn’t include anywhere in Navarre.

Can I interest anyone else in compiling a list?