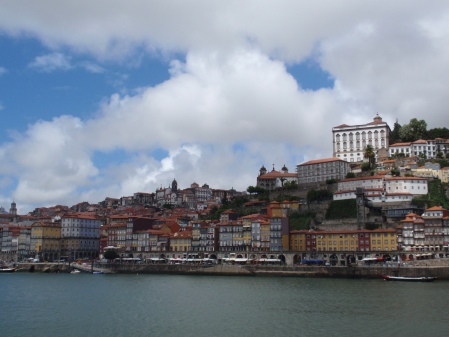 When we went to bed the sky was clear but at some time during the night the clouds must have rolled in because when we woke the sky was heavy with mist and weather prospects looked desperate.

We hoped that it might improve during breakfast but we had to admit that this was most unlikely especially as the clouds thickened and the rain began to fall even more steadily.  Postponed from day one we were planning to visit the beaches today but it seemed pointless to wander aimlessly from damp town to damp town getting thoroughly wet and feeling miserable so we agreed instead to change our plans and return to Porto where at least there would be churches and museums where it would be dry inside and if the worst came to the very worst probably a shopping centre or a covered market and we could look at shoes and sparkly things.

After checking out we drove a couple of stops down the metro line and found an empty car park and left the car all alone without any sort of automobile company while we waited for the tram to arrive.  The driving rain slowed to a drizzle but it stayed with us for the entire journey into Porto first through farms with irregular shaped fields, no doubt the result of years of complicated inheritances, then wild meadows, pine-woods and copses of eucalyptus trees on a journey frequently punctuated with stops at every village en route.

Nearer to the city the farms shrunk to smallholdings and on the urban outskirts further still to allotments and gardens but everywhere there was an abundance of fruit and vegetables.

The tram arrived in Trindade and we could see outside in the street that it was still raining and people were hurrying by sheltered under umbrellas so we stayed underground and changed lines for a couple of stops to San Bento.  It only took a few minutes but when we emerged from the subterranean metro system it was a whole lot brighter and there was only the odd spit of rain.  We visited the train station, which today was being used for its more traditional function and then we walked towards the direction of the river down the Rua de Flores.

Here there were small shops and traditional bars and cafés side by side with derelict and decrepit buildings with rotting timbers, rusting balconies, cracked tiled facades trying in vain to disguise years of neglect and so many washing lines that laundry could almost be a national pastime.  The road channels were grubby and the buildings were grimy but it wasn’t without a certain charm and the defiant message from the residents seemed to be “Come and visit us if you like, we know it’s untidy but this is the way we like it!”

This lady seemed especially pleased to welcome us to her city…

As we walked to the end of the street there were spreading patches of blue in the sky and things were beginning to brighten up.  We were heading for the City’s covered market but when we arrived there it had clearly been closed and unused for some time and on the map we located its modern replacement but it was back in the direction that we had walked so we abandoned the idea of visiting it.

Miraculously the sun was out now, which was good news for Micky because it meant that we didn’t have to take the church visit option (Micky doesn’t like churches) as we passed underneath Igrija de São Fransisco, one of the few medieval buildings in Porto, ignored a multi-lingual beggar and continued on to the Douro.

Not only was the sun out now but it was hot and as we walked along the side of the river shutters were being thrown back in the apartments and more washing was beginning to appear on the balconies.  This change in the weather cheered us up no end and on the Ribeira near to the Ponte Dom Luis we selected a restaurant with outside tables for a drink and a convenient place for an application of sun lotion.  Now it was really hot and the waiter was encouraged enough by this to begin fussily laying the outside tables for lunch and brought out table cloths, plates, cutlery and menus and then began to look for customers. 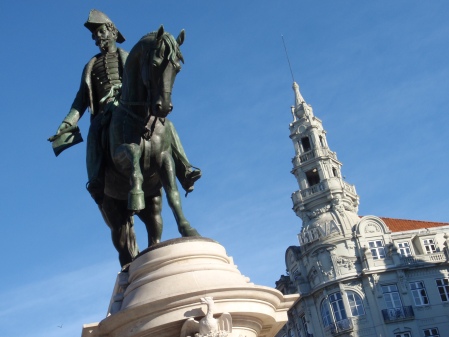 He should have looked up because just out to sea the sky was blackening with alarming speed and it was obvious that we were in for a drenching.  Sure enough the cloud rolled in like a fleet of water bowsers and the heavens opened.  He had to clear the tables a lot quicker than he had laid them and without the attention to detail either and soon the rain was bouncing off the pavement like shrapnel.  The patio umbrellas proved little protection against this Atlantic squall as the rain drove in sideways and soon we were forced to take shelter inside.

It passed by however and as quickly as it had started it stopped again and the blue sky advancing from the west chased the clouds away inland and within only a matter of minutes the sun was shining, the pavements were steaming and the washing was coming back out again.  That was a close shave because rain could well have meant an afternoon around the shops but at the bridge we were able to take the fair weather option and we crossed once more over to Vila Nova de Gaia.