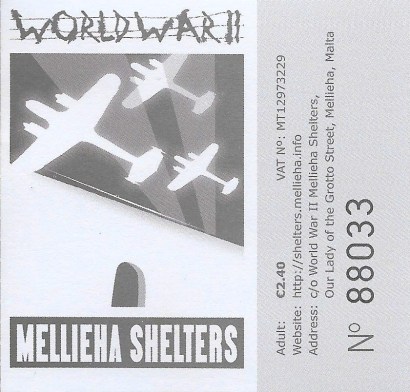 In Spring 2015 we spent a few days on the island of Malta.  This was a bit of an experiment on my part because I wanted to see if Kim liked it there as much as I do.  It is sometimes said that you either love Malta or you hate it, it is like Manchester United or Marmite, there are no half measures, there is no sitting on the fence.

As it turned out Kim loved it and eighteen months later we returned to the same place this time with grandchildren.

This was to be a family holiday, sightseeing would not be a priority but there were one or two things that we wanted to do all the same.  One of them was to go to the village of Mellieha and visit the Second-World-War air-raid shelters which were closed the last time that we had visited. 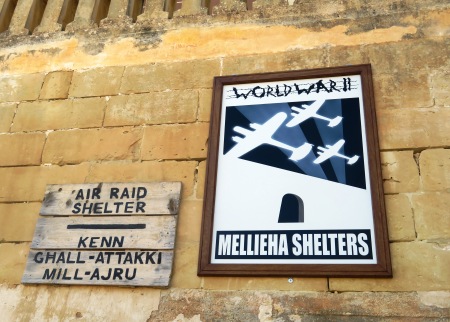 As it was a hot day and the children preferred to stay at the hotel swimming pool we spared them the ordeal of the walk.  It was a steep climb to the village with a long sweeping road and baking tarmac that looped around in teasing bends and we were glad when we reached the top and the huge Parish Church because although this was October it was still very hot.

Everyone was keen to tell us that Malta was suffering a drought and there had been no real rain for eighteen months or so.  We sympathised with them of course but secretly hoped that the drought and the hot weather would last just a few more days!

Every village in Malta and Gozo has a church the size of a medieval cathedral and all have a story of how it was paid for and built by the residents of the village and Mellieha is no exception.  It is indeed a grand structure standing in the most prominent place in the village with glorious views in all directions.

This time we were pleased to find that the shelter was open for business, there was a man at a desk who looked old enough to have helped build the tunnels who gave us some information and we purchased our good value tickets at only €2.40 each and went through the entrance and immediately underground.

These shelters were cut into the rock all over Mellieha and the rest of Malta during the war because the island has the unenviable record for being the most bombed place in all of Europe.  To be specific and before someone picks me up on this point,  I am talking about the longest sustained bombing campaign and not the greatest amount of tonnage or even the most destructive. 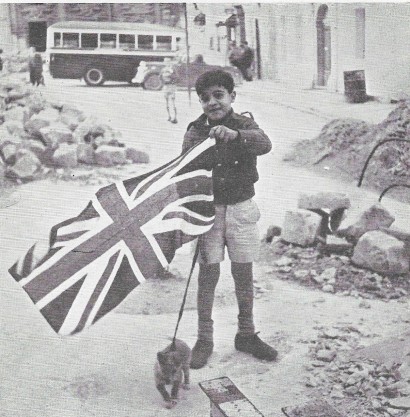 This was because of its potential importance to both the Allies and the Axis powers.  The capital of Valletta and its important harbour was of high strategic value, for the British to protect their Mediterranean fleet and a much valued prize for Germany as an important place to support the supply chain to the overstretched army in North Africa.

In two years from June 1940 the Luftwaffe flew three-thousand bombing raids over Malta, nine thousand buildings were destroyed and seventeen-thousand more severely damaged.  In March and April 1942, more explosives were dropped on the tiny Mediterranean island of Malta – smaller than the Isle of Wight – than on the whole of Britain during the first year of the Blitz.

People needed somewhere safe to shelter and two-thousand miners and stonemasons were recruited to build public shelters and began to tunnel into the limestone rock of the island.

The shelter at Mellieha was one of them and it took us into a labyrinth of passages nearly half a mile long with a decent amount of displays and reconstructions to tell the story of the shelters and the daily life of the people who like Hobbits, had no option but to use them.  Most people sheltered in the crowded communal tunnels but some were fortunate to have their own private rooms and there was a confessional shelter and a two room maternity wing.

By June 1941 the digging workforce had increased to over five-thousand and nearly five-hundred public rock shelters had been finished and another four-hundred were in progress.  In all they could house over two-hundred thousand Maltese civilians which was just about enough but also thoroughly uncomfortable. 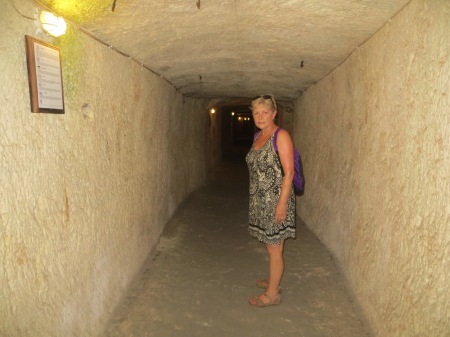 By February 1942, with raids often continuous throughout the night, shelters became congested with chairs and bedding brought in for comfort and rest.  The four square feet per head originally allowed was reduced to two and was hopelessly insufficient.  Anticipating a night of raids, people began to rush to shelters straight after evening meal every evening.  Spaces were often over-subscribed and crowded. Conditions were said to be dirty, cramped and noisy but at least provided safety from the raids above. Rather like the Underground stations in London during the blitz.

It reminded me of when I was a boy of about ten and I had a friend called Dave (Daddy) Elson who had dug an underground camp in his back garden – we used to go to his camp and sit in it by candle-light and wonder why?

On the way out we spotted a sign which said…”Life during the enemy blitz is not an experience we wish to relive, hence the Mellieha World War II shelters stand as a testimony to those who endured the adversity of war until victory was won.”  – I think that just about says it all!

To be honest, apart from a visit to the war time air raid shelter there isn’t a great deal more to see in Mellieha.  Even though it has been included in the EU list of ‘European Destinations of Excellence’ it isn’t really a tourist attraction and it is all the better for that, so after a while exploring the streets and the tiny working harbour we made our way back down to the holiday bay and selected a bar for a beer and a snack of a Maltese platter and as we sat with the sun on our backs a reflection on life under ground and what life might have been like during the siege. 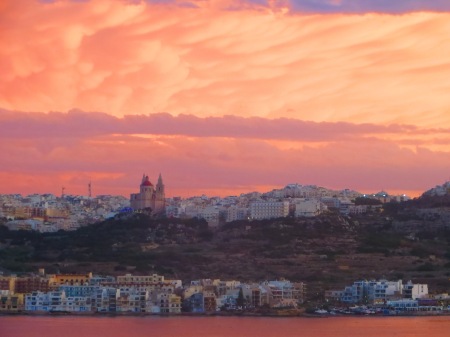 41 responses to “Entrance Tickets, Malta and the Mellieha WW2 Shelters”