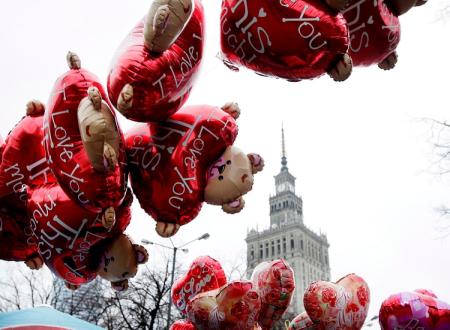 On arrival in Warsaw it was most noticeable was that it was very, very busy indeed and this turned out to be on account of the fact that this was February 14th, Saint Valentine’s Day.

Apparently this is a very big big day in Poland with lots of street entertainment, so many free roses distributed on the pavements that most girls were carrying an overflowing bouquet and bars full to capacity as families and lovers dawdled through the old town streets in the unexpected sunshine.

After completing a circuit of the old town just to get our bearings and to identify some potential restaurants for later we found a bar with a vacant table and ordered our first Polish beers.  The waiter tried to persuade us to eat but we said it was too early.  He was persistent and told us this would be a good time because later everywhere would be full.  In retrospect he clearly knew something that I didn’t.

Kim wondered if we should book a table somewhere but I passed this off as opportunist salesmanship and persuaded her that there was no real need.

This was a decision that I was going to regret later.  Life is like that, sometimes you miss an opportunity that you will never get again, rather like putting £100 on Leicester City to win the Premier League at 5000 to 1.  I didn’t of course.

So we made our way back to the Polonia Palace Hotel stopping off at a mini-market on the way to get some essential supplies and then we squandered a couple of hours enjoying the room and a glass or two of wine as there was no dining problems ahead at all.

Finally we made our way out at about eight o’clock and the place was heaving with people, the pavements were jammed and there were queues at the burger bars and pubs and that was when I first started to grow concerned.  We tried a restaurant but were turned away because it was fully booked and then a second with the same result.  At a third the waiter told us that everywhere was certain to be fully booked tonight for Valentine’s night and that without a reservation we had almost zero chance of securing a table because every restaurant was sure to be full to capacity with misty eyed lovers exchanging gifts and carried away by the occasion making ill-considered marriage proposals.

Slowly that “I told you so” look started to creep over Kim’s face like a red wine stain on a white tablecloth.

We had a debate and Kim decided that there was little point walking all the way to the old town just to suffer multiple rejections and my complete humiliation so we walked back to the hotel in the hope that there would be a spare table there.  My fingers were so firmly crossed that the blood circulation was slowly being cut off.  We passed the Palace of Culture which was bathed in Valentine crimson light and as I glanced across I noticed that Kim’s face was a similar colour, flushed in her case with irritation rather than passion.

Luckily the hotel restaurant could accommodate us for a special Valentine’s Day buffet and we enjoyed a fine, if rather expensive, meal and a glass or two of wine.  The day was saved!

One thing that intrigued me was that although this was Valentine’s Day with a special menu there were a number of people around us who seemed preoccupied with their mobile phones.  A young couple at the next table barely spoke a word to each other as they endlessly scrolled through their digital lives rather than attempt a conversation with each other.  I wondered if they had booked a table for four, him and her and their two tablets.  It seemed like a waste of money to me to pay for an expensive meal and spend so much time on Facebook!

25 responses to “Valentine’s Day in Warsaw”