Travels in Spain, Alcoy and the Festival of the Moors and the Christians 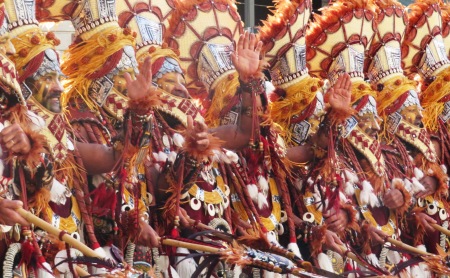 I do like Spanish carnivals and I have always been keen to see a Festival of Moors and Christians which take place regularly throughout the year mostly in the province of Valencia in the Levante region of Spain.

Earlier this year I was trawling the airline web sites and reconciling these to suitable events and came across the perfect combination; cheap flights to Alicante and one of the most famous of all these festivals in the nearby town of Alcoy near to Benidorm and with dates that matched perfectly,  I didn’t take a lot of persuading to book the flights.

Finding a hotel was a lot more difficult, Alcoy gets rather busy during the three day festival and the nearest that I could find at a price that suits my skinflint budget was twenty miles away in the village of Confrides near to Guadalest.

The Festival of Moors and Christians celebrates the seven hundred year period between 722 and 1492 which has long been known to historians of Spain as the ‘Reconquista’ and the Spanish have organised and interpreted their medieval history around the drama of this glorious event which over time has become an established feature of the self-image of the Spanish people.  It has become embellished into a sort of organised Catholic national crusade but it is a confusing story because Spain has largely embraced its Muslim occupation as a proud part of its history. 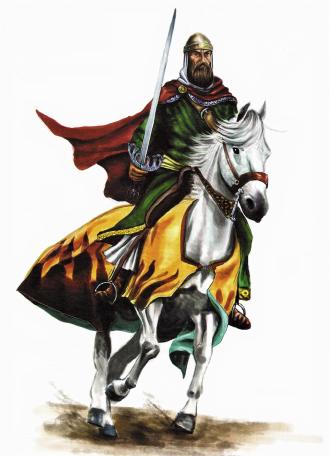 In popular culture the reconquest has been raised to the status of a crusade and the expulsion of the Moors as liberation from an occupying army but this is not strictly the case and it would be wrong to interpret it in this way.  At this time Córdoba became the largest, richest and most sophisticated city in Western Europe.  Mediterranean trade and cultural exchange flourished.  Muslims imported a rich intellectual tradition from the Middle East and North Africa and Muslim and Jewish scholars played an important part in reviving and expanding classical Greek learning in Western Europe.

The period of Moorish occupation was to last nearly four hundred years and in eastern Iberia the Moors created the landscape of the region. After irrigation they planted citrus groves and peach and almond orchards. The terraces seen on the hillsides throughout the region are an everlasting Moor legacy.

As it is essentially a celebration the people of the town and the surrounding villages split themselves equally into Moors and Christians and then organise grand parades and mock battles to tell the story of the ‘Reconquista’. 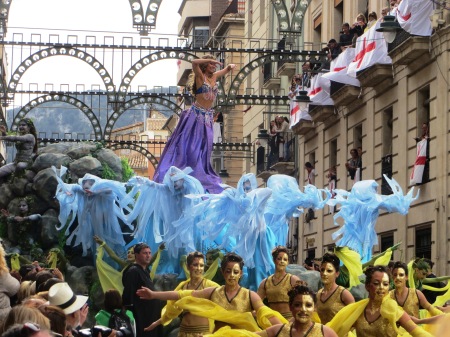 After meeting Mick and Lindsay (my sister and her husband) we began by driving from the airport directly to our hotel and when I say directly I use this term in the loosest possible sense because the mountain drive from Alicante to Confrides is anything but direct with roads that sweep and climb and rise and fall around the contours of the pepper grey mountains decorated with sprawling orchards and fruit trees.

Just a few miles out of Alicante and we noticed something pretty dramatic – suddenly, almost within the turn of a corner, the landscape changed from brown and arid to green and mountainous; the high-rise concrete hotels gave way to pretty villages and we found myself in lush valleys of oranges, almonds and lemon groves.

We were delighted with the hotel, a simple place on a bend in the road that provided excellent views along the fertile valley.  There is nothing boutique about Pensión El Pirineo just a down-to-earth place with unpretentious rooms and a promising menu so we booked a table for later and made our way to Alcoy.

The town was busy and parking was difficult but eventually we squeezed into a spot along a dusty track and made our way on foot to the Plaza Major which was anticipating the procession of the Moors.  The Christians had arrived earlier this morning so we had missed that already.  The procession was timed for five o’clock and as the event got closer the square was filled to bursting with people taking up their positions ready for the parade.

It was mad, chaotic and disorganised.  In my last job once a year I helped organise a street parade in Spalding in Lincolnshire but by the time it stopped forever the police and the health and safety fanatics had squeezed the life out of it but this was not a problem in Alcoy I can tell you as people pushed and shoved and wandered around unrestricted on the parade route.

I didn’t know exactly what to expect but it was wonderful. The Moors arrived on horseback and in marching columns some in historically accurate uniforms but others with a very loose interpretation of Moorish costumes. – rather more carnival theatre than history.

The Festival lasts for three days and is all rather intense so we were happy with our one afternoon, this year we saw the parade, maybe next year we will return for the final day siege.  As it happened we had to battle our way out of the town as people filled the streets and the bars and the festivities continued on every street corner and we felt happy to have shared a happy slice of Spanish life and culture.

We shared another slice of Spanish life later that evening back at Pensión El Pirineo where local people came and went through the bar and the restaurant and we savoured an evening of local cuisine and Murcian wine – it was delightful!

11 responses to “Travels in Spain, Alcoy and the Festival of the Moors and the Christians”