Before dining however we walked through to the opposite side of town and along the ‘wall of woolens’, so called because here there were more market stalls cut into the arches of the original city wall and then we were tempted to part with thirty Eeks each to climb to the top of the tower for a two hundred metre elevated walk looking down over the rooftops and the narrow medieval streets below.

Back at street level we wandered down the delightful St Catherine’s Passage in between fifteenth, sixteenth and seventeenth century buildings where artisans and craftsmen and women were preserving medieval crafts such as glass blowing, intricate iron work, jewellery and leather work.  At  the end of the passage was a basement restaurant where we stopped for a bowl of soup and a glass of beer and we successfully negotiated the potential crisis moment when Sue and Christine both found something on the menu that they could order with confidence and enjoy.

By mid afternoon when we left the subterranean restaurant it was already starting to get dark because thanks to the ‘polar night’ phenomenon, in the Winter, Tallinn, on the same line of latitude as the Shetland Isles, enjoys only a few short hours of daylight. It has late sunrises and early sunsets, which creates incredibly short days and endlessly long nights.  On an overcast day like today the effect was even worse and it is little wonder that Tallinners have been known to have a tendency toward seasonal depression as a result.

We needed some beers and a bottle of wine but we didn’t pass any shops so as it was still early Mike and I walked around the city ring road in search of a mini market.  The route we chose took us towards the railway station and this wasn’t any real surprise because is a railway man by profession and enthusiasm and after about a kilometre or so we were outside the ticket office and an impressive Soviet Steam Engine, the L2317, a 2-10-0 locomotive built in 1953 in Russia at a factory in the Moscow railway suburb city of Kolomna.

The Russian L-series locomotives were one of the more advanced steam locomotives built in the former Soviet Union.   It was a mighty black iron beast with red wheels of almost ninety tonnes that really deserved a name rather than just a number, which during its working life pulled mostly freight trains between Russia and Estonia and after it was decommissioned was rather ignominiously used as a static boiler to heat nearby houses.

It has been externally restored now and sits tall and proud outside the railway station, which was where we went next. 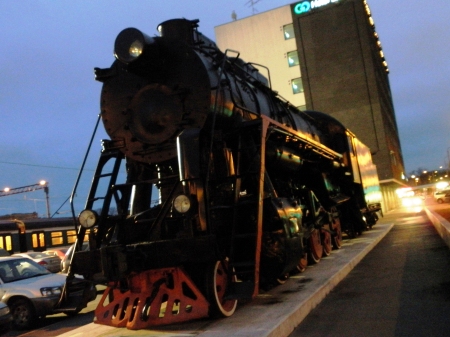 We were now in the working part of the city and a long way from the Christmas market and the students dressed in medieval costumes and the overpriced restaurants.

The station felt tired and past its best and next to it was a tram station that conjured up dreary images of the old days of the Soviet Empire and what was surprising was that the passengers on board looked grey and tired and firmly locked permanently into a 1960s Tallinn time warp.  The trams whirred and screeched and sounded bells to warn of their approach as they drew up and pulled off, setting down and picking up and clattering away again between the rows of old wooden houses and out towards the proletarian flats of the city suburbs.

Next to the station in an ugly 1970s concrete shopping mall we came across a two-story traditional food market selling fish, meat, vegetables and everything for the working class weekly shop.  Everything that is apart from alcohol so we were about to give up when we came across a small kiosk with cans of Estonian beer in the fridge and a screw cap bottle of blossom hill red wine.  Not exactly traditional but without a corkscrew we were severely limited for choice.

Later we all met up in reception and wrapped up in hats, scarves and thermal gloves walked back into town making our way past the skating rink that we decided to leave until tomorrow, towards the Raekoja Plats where we were surprised to find the market closed.  It was only eight o’clock and I would have thought a Times listed top twenty Christmas market would still be open in the evening. 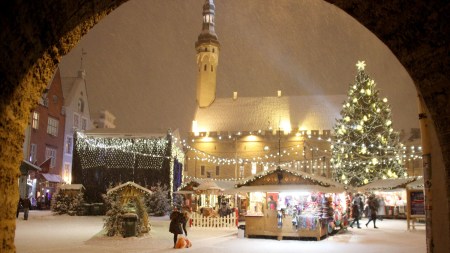 We dealt with the disappointment as best we could and then began the search for a suitable eating establishment.  We didn’t take too long over this and agreed upon one of the medieval banquet houses, the Peppersack, that was located in an old building not far from the Town Hall Square.  There was a good menu of hearty food and we enjoyed meat skewers and fillets and best of all plenty of Estonian beer and wine to wash it all down.

All we needed now was some snow but sadly there was none as we left the restaurant and walked back to the hotel with the objective of a final nightcap.  There was no hope of that at the Von Stackleberg because the bar was closed so we wandered across the road instead to a modern glitzy hotel that was still open, and our final drink and made our day one assessment of Tallinn, which we agreed we all liked, before calling it a day and agreeing to meet at nine o’clock in the morning for breakfast. 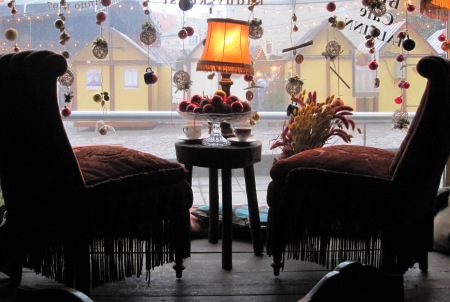