In England we have to National Day, no Independence Day, in fact we tend to celebrate a day when we were invaded and lost our Independence.

The Year 1066 is probably the most memorable in English history.

On October 14th (now officially Hastings Day) that year Harold, the last Anglo-Saxon king of England and most of his army with him were cut down at the Battle of Hastings, and William, Duke of Normandy earned his nickname “William the Conqueror”. William, who was using Hastings as his base, then claimed the crown and changed the way England was governed forever.

Unlike the Scots who sing national anthems (unofficial) about fighting the English and the Welsh can’t get over the military campaigns and begrudge the castles of Edward I (even though they generate lots of tourist revenue) it is a curious fact that the English actually celebrate and embrace the 1066 Battle of Hastings. I suppose this says a lot about the nature of the English because instead of sulking behind a defensive nationalist barrier and bristling with rage and resentment we have actually hijacked the event and reorganised our subsequent history around it. 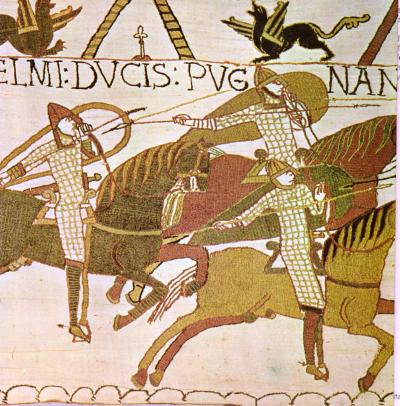 After the successful invasion William and the Normans set about imposing their military domination and completely reforming the previous Anglo Saxon administrative and political  regime and modern English history really starts from that date.  The subjugation and the transformation was so completely successful because the English (except Hereward the Wake of course) recognised the benefits of this, allowed it to happen and simply got on with their lives.  They didn’t sit in caves watching spiders or retreat to Anglesey to brood and get angry about it.

Today the French irreverently refer to the English as Anglo-Saxons (in the same way that we refer to them as Frogs) but their description is entirely incorrect because for a thousand years we have been Norman-English whereas the French do eat frogs!

In 1966, I was twelve years old and England went into a frenzy as the 900th anniversary was celebrated and it was such a success that Hastings Borough Council decided to mark the date every year as Hastings Day. 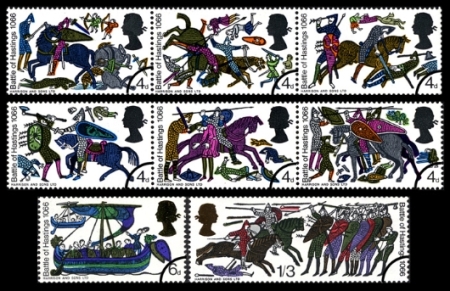 On the build up to the event there were commemorative stamps and gold coins, tea towels, pencil sets and mugs and everyone got in on the act: “Battle of Hastings 1066—Bottle of Guinness 1966” frothed a thousand billboards. ‘Whoosh! It’s another big breakaway conquest,’ proclaimed the makers of Bri-Nylon clothing in advertisements showing mounted Bri-Nyloned models setting out against the Saxons and another alternative version of the battle showed the Norman warriors armed with Desoutter Power Tools.  Heinz offered a chance to enter an archery contest in which the first 1,066 winners would be rewarded with Kenwood Chef food mixers.  Every English town that could claim the remotest connection with either Harold or William beckoned tourists with such  attractions as Conquest puppet shows, town-crier contests and battle re-enactments by grown men who still liked dressing up and playing soldiers. 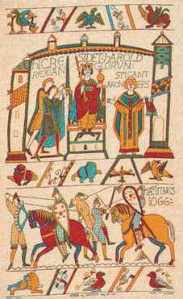 Naturally, in the forefront of all this  was Hastings, which, as its local newspaper proudly pointed out, ‘is better known internationally than almost any other town.’  To give the anniversary its deserved importance and promote tourism, the Hastings Town Council spent a small fortune building a triple-domed exhibition hall called the Triodome.  The principal exhibit was intended to be the great Bayeux Tapestry but the tapestry is the property of the town of Bayeux in Normandy, which, fearing damage to the precious artefact, refused to lend it for the occasion, and so, rather than sulk,  like the Greeks and the Elgin Marbles, Hastings produced its own. 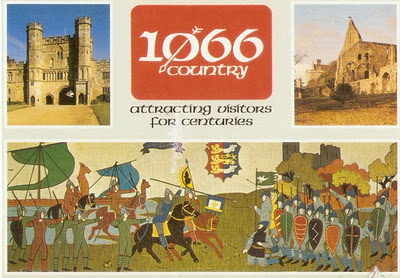 The Hastings Embroidery was made by the Royal School of Needlework in 1965. It took twenty-two embroiderers ten months to finish and it was intended to be a modern day equivalent of the Bayeux Tapestry.  It consists of twenty-seven panels, each nine by three foot, and shows eighty-one great events in British history during the nine-hundred years from 1066 to 1966.

The Embroidery is worked in appliqué by hand, with the addition of couched threads and cords in the same way as the Bayeux Tapestry.  It incorporates tweed from Scotland, fabrics from the Victoria and Albert Museum, and feathers from London Zoo.  When completed it went on public display in Hastings, firstly in the Town Hall and then at the White Rock Pavilion.  The Embroidery is currently in storage, and, despite local campaigns to have it brought out of the bottom drawer, apart from two panels on permanent display in the Town Hall, it is not on public display.  The reason given is that to preserve the cloth and appliqué that special storage displays would have to made and the cost would be prohibitive.  I can’t help thinking there may be another reason – perhaps it isn’t that good?

I began this article by trying to rise above patriotic smugness but I cannot finish without reminding the French that, in a delicious twist of fate, less than three months before the 900 year celebrations of a French victory over the Anglo Saxons, England beat France in the World Cup group stages by two goals to nil.  France finished bottom in the group, England finished top and went on to win the Jules Rimet trophy! 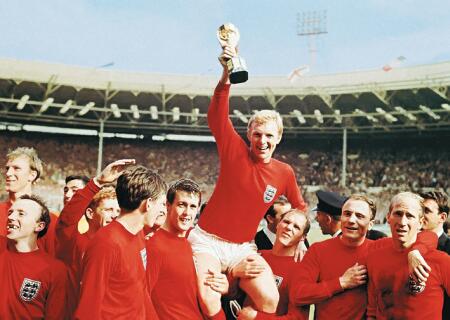 30 responses to “An Alternative Independence Day”