Portugal, Tomar, an Unexpected Festival and a Geographic Coincidence

Breakfast at the United Nations table was a little easier for us today, the French Canadians and the Flemish Belgians had left and been replaced by an Irish couple and two ladies from New Zealand, so we were not so linguistically outnumbered this morning and ours was the majority language.

The Americans continued to struggle with the English language but it didn’t seem to bother the Germans who were quite happy chatting away with us all in Queen’s English.  The Russians showed no inclination to join in.

As it happened, the Germans were leaving today and driving to Coimbra, the Americans were driving north and the New Zealanders were going south to the Algarve but our plan was to visit the Convento de Cristo, an important historical monument built originally by the Knights Templar as long ago as the twelfth century, their most important possession in all of Iberia and now since 1983 a UNESCO World Heritage Site.

I diagress here for a sentence or two – Tomar is most famous, not just for the Convento de Cristo but also for the Festa dos Tabuleiros. A festival that is held every four years when the local population parades in pairs with women and young girls carrying tabuleiros on their heads and men accompanying them to make sure they don’t fall off because these things are seriously heavy.

What is a tabuleiro I hear you ask?  Well, a tabuleiro is made of thirty stacked pieces of bread, liberally decorated with flowers and carried on the head.  At the top is a crown which normally contains either a white dove, symbolising the Holy Spirit, or the Esfera Armilar, which turns out to be a symbol of  historical Portuguese maritime expansion of five hundred years ago or so.  Tomar it turns out was once the base of Henry the Navigator even though it is some considerable distance from the Atlantic Ocean.

I mention this because after we set off at about ten o’clock and were almost immediately distracted by some music and making our way to the town centre we came across a parade. You are probably expecting me to tell you that It was the Festa dos Tabuleiros but of course it wasn’t because this wasn’t scheduled for a further two years or so but rather an annual religious event called Nossa Senhora da Piedade which is always held on the first Sunday in September and which also involves ladies carrying baskets of bread on their heads. 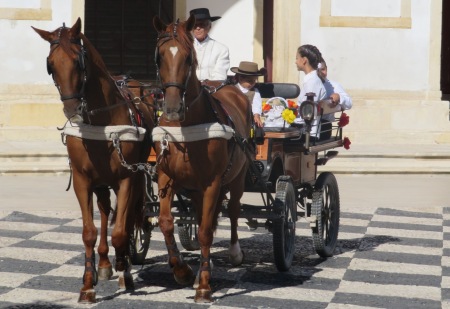 This was a real bonus; usually we are unlucky about such events; they have usually taken place a week before we arrived or are due to take place a couple of days after we have left. I am not exaggerating here, this was literally the first time that we have ever had such good fortune on our travels.

We chanced upon the parade at the very start and then followed it through the streets until it made its way to the main square, the Praça da República (in any Portuguese town the equivalent of the Spanish Plaza Mayor) and then following some religious rituals that we didn’t fully understand it set off again to an out of town religious sanctuary, the Hermitage of Our Lady of Mercy, but we had enough by this time so before setting off for the Convent we sat in the square in the already burning sun and had a coffee and a beer.

As we sat we engaged in conversation with a Canadian man who was walking the Camino Way, as you do in these situations we naturally exchanged personal information and told him that we lived in a town called Grimsby in England and he told us that he lived in Toronto near a place called Grimsby on Lake Ontario and close to the Niagara Falls. I really didn’t expect a coincidence like that during a chance meeting at a pavement bar in central Portugal.  Moments like that always enhance the travel experience don’t you think?

We finished our drinks, he drank the last of his mineral water, left and followed the sign of the scallop shell on the way to Santiago de Compostela and we said once again that one day that we would like to do that but for today we simply contemplated the climb to the Convent and the Castle and then had a second beer to prepare ourselves before setting off.

29 responses to “Portugal, Tomar, an Unexpected Festival and a Geographic Coincidence”