The plan now was to drive just a little way north to the City of Braga and visit the park of Bom Jesus do Monte and although this was only a short journey this wasn’t nearly as straight forward as it should have been.

Too much of a skinflint to pay motorway toll charges I decided to take the old road instead which runs close by and often parallel.  What made this so difficult was the curious system of road signs that the Portuguese have.  One minute you are happily following signs to a destination and then suddenly, usually at a critical roundabout or busy junction where you have to make a quick decision, they simply disappear and taking the right option becomes a bit of a lottery.  It was all too confusing so after only a short while I abandoned the old road and found a way back to the motorway instead.

There was no traffic on the motorway of course because Portuguese drivers resent paying tolls and prefer to sit in the traffic queues on the old roads instead.  I am often quite good at getting pictures with no people in them but a motorway with no traffic is a first…

Braga is the third largest city in Portugal (or maybe the fourth because Coimbra claims third place as well, I think it depends on whether they are measuring population or area) but we weren’t planning to visit the Episcopal capital of the country and instead we used the ring road to swing to the east out into the country and towards the religious sanctuary on top of a high hill on the outskirts of the city.

He also sponsored the next segment of stairways, which has a zigzag shape and is dedicated to the Five Senses of Sight, Smell, Hearing, Touch and Taste and each is represented by a different fountain. 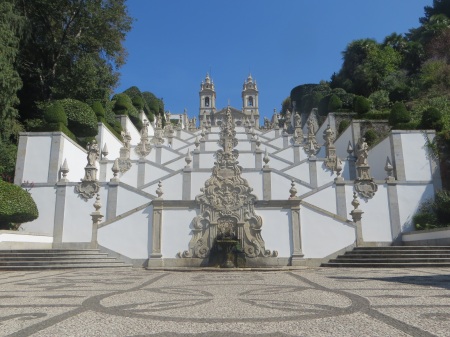 Around 1781, Archbishop Gaspar de Bragança decided to complete the sanctuary by adding a third segment of stairways and a new church. The third stairway also follows a zigzag pattern and is dedicated to the Three Theological Virtues: Faith, Hope and Charity, each with its own fountain.  The old church was demolished and a new one was built following a neoclassic design. In the nineteenth century the area around the church and stairway was acquired and turned into a park and in 1882, to facilitate the access to the Sanctuary, the Bom Jesus funicular was built linking the city of Braga to the hill.

This was the first funicular to be built in the Iberian Peninsula and is still in use today.

We stood at the top of the steps and debated whether or not to go to the bottom but after we realised that true penitent visitors climb them on their knees we agreed that a gentle stroll would be quite easy by comparison so we did just that and we were pleased that we did because the view from the bottom looking up the towering black and white stair case made it worth going to all the trouble.

We spent a lot of time at the bottom of the staircase waiting for picture opportunities without people and this took some considerable time.  Just look how selfish this chap was… 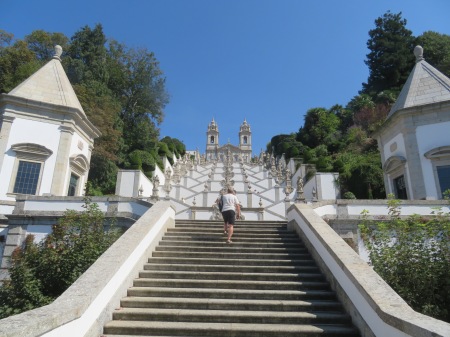 In the heat of the afternoon it was a long slog of a climb back to the top where the park was beginning to fill up with visitors from the city. There was a curious blend of attractions in the park, with the church itself, gardens that had a touch of Antoni Gaudi and Park Guell in Barcelona, the inevitable tourist train and children photographers.  Everyone was having a good time including a quartet of elderly lady singers who were being enthusiastically orchestrated by a fifth member of the party who was in charge of random song selection and keeping everyone in some sort of time.

Leaving Bom Jesus do Monte I got rather lost getting to Braga and then through to the other side and I was pleased when we eventually groped our way to the motorway and with one eye on the dashboard warning light I drove gently back to Vila do Conde and made for the seafront where we found a bar overlooking the Atlantic Ocean.  Rather annoyingly it was calm and gentle this afternoon which was the first time we had seen it that way but it was too late now to go swimming so we ordered drinks instead and sat and made an assessment of our Portugal holiday.

Later we spent a last few minutes at the Santa Clara Monastery, admired the views over the River Ave and the Ocean beyond, walked for a while in the shadow of the Aqueduct  before returning the car and preparing for our return to UK early next morning.

33 responses to “Portugal, Bom Jesus do Monte at Braga”