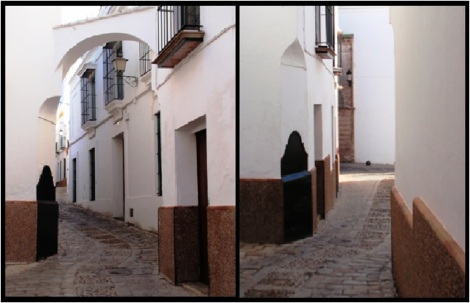 Small Spanish towns can be quite charming but sometimes they can present a serious driving challenge.

One time we were in the town of Carmona in Andalucia and arriving at night time were looking for our hotel. I took the correct turning through an imposing medieval fortress gate and into a labyrinth of confusing narrow streets.

This was a big mistake because the road climbed up a narrow cobbled street barely wide enough for the car to pass and then seemed to abruptly stop at what looked like a pedestrian alleyway. There was an elderly Spanish couple out strolling so we asked for help and after they had studied the map seemed to suggest to us that we should carry on down this narrow path. We were not convinced and asked for clarification and the man, who spoke no English and was not terribly useful, was determined not to let his wife, who could speak a little English and was a lot more helpful, have her turn with the map.

Anyway, while we were debating the situation another car pulled up behind and seemed to be heading in the direction of the alleyway so this was a clue that that was indeed the correct way to go. As we pulled away the woman looked into the car and in a genuinely caring sort of way said ‘Be careful, good luck’ and this parting comment filled my cup of confidence full to the brim.

We set off and it soon became clear why we needed both precision and good fortune because if we had thought that the previous street had been narrow this one made it look like a six lane highway! First of all it was necessary to negotiate a dog leg gate that was barely wider than the car and we all had to collectively breathe in so that we could squeeze through and after that the street narrowed down still further and I needed keyhole surgery skills to manoeuvre through 90º bends and past carelessly parked cars and iron bollards strategically placed to impede at every turn.

Going forward was tricky and we were making slow progress but what really concerned me was the possibility of reaching a dead end and having to reverse all the way back because that would have been impossible. Finally however we came out into a square (that was actually a circle) and by luck we had found our hotel.

I returned the next morning to take these pictures.