Travels in Spain, A Mountain Pass and a Fuel Crisis 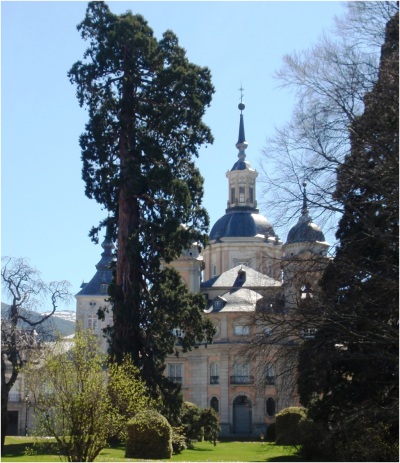 “The Sierra, like the moon, had two distinct faces: the north one aloof and cold in its shadow, a place of green thickets and alpine silence, whilst to the south the mountain was just a raw burnt rock, the cliffs stripped bare by the sun.”  – Laurie Lee

After we had walked through the gardens we reluctantly left the Palace of San Ildefonso o La Granja and then the town and we drove south again towards our next intended destination, the fortress town of Manzanares El Real where we planned to see our final castle.

To get there we had to drive across the top of the mountain and shortly after leaving San Ildefonso we began to steadily climb the northern face of the peaks.  Eventually we reached the top at a mountain pass called Puerto de Navacerrada, the gateway to the long descent on the southern side down towards Madrid.  We were right on schedule but at the top were some policemen who pulled us to a stop and then explained that the road was closed and that we would have to take a detour back down the northern side of the mountain.

At least we assumed that was what they were saying because to be honest I didn’t understand Spanish police instructions terribly well and they weren’t especially good at understanding English tourists who couldn’t understand Spanish police instructions.  I said “Madrid, Madrid, Madrid” on the basis if you say something over and over and get louder each time a foreigner might eventually understand and this seemed to work on this occasion because eventually he pointed again to the alternative road that we would have to take and smiled as we set off.

This was going to be a problem because it was going to add twenty miles to the journey and there certainly wasn’t enough fuel in the tank for that.  Luckily it was all down-hill from here so I used the throttle as little as possible and freewheeled down the safe sections.  I knew that there was enough fuel left in the tank but as we went down the really steep bits the needle on the fuel gauge rushed headlong into the red zone and even though I knew this was because of uneven fuel distribution in the tank the situation certainly brought me out in a hot sweat.

There was no sign of a filling station and I began to grow concerned but then we reached the pretty town of Rascafria sitting in a narrow valley surrounded by mountain peaks and after stopping and asking for directions at a restaurant we thankfully found a garage and I put an extra couple of squirts in more than we really needed just to be on the safe side.

After I had calmed down we relaxed a little at a café pavement table and then walked through the streets of the charming little mountain town that provided a pleasant contrast to the tourist cities of Toledo and Segovia.  It was as though we had turned full circle and were back in Belmonte and then we resumed our journey.  There was a safe route but feeling confident once more we choose to try the mountain passes again this time using the eastern route and we hoped that this wouldn’t be blocked and closed as well.

We climbed again, quite quickly this time and reached a mountain top plateau surrounded by snowy peaks and with uninterrupted views into the distance.  We were only twenty miles from Madrid but we were practically alone in a lonely natural wilderness. What a day this was to be in this seemingly remote part of Spain, a glorious blue sky, snow on the mountains, early days of Spring and absolutely no one to share it with.

We crossed the top and thankfully there were no Guardia Civil to send us back and after we passed through the town of Miraflores de la Sierra the road dropped quickly down to the shoreline of a shimmering blue reservoir and the town of Manzanares El Real.

We arrived and parked in a dusty car park directly below the huge medieval castle sat on an outcrop of rock that we had driven here to see.  Leaving the car we walked through the languid square where little afternoon groups of men in flat caps and berets were congregating and debating the big issues of the day and women were shopping in the small stores around the perimeter.  They don’t get many English tourists here, especially in March so I think one or two of them were surprised to see us as they went about their daily routine.

We found the entrance to the castle and paid our €4 fee and then made our way inside through the main gate.  The castle has been restored of course, most recently in the 1970s, because only a few years ago it wasn’t in very good shape at all and I guessed that what we were seeing was what Belmonte castle will look like when it too has been restored.

Inside the main building we followed a route through a succession of restored rooms with displays of armour and medieval bric-a-brac of dubious originality and then out onto the battlements and turrets at the very top of the building.  To the north there were the snowy peaks of the mountains and to the south a stunning view over the Embalse de Santillana which is a recent addition to the landscape of course so wouldn’t have been there in the middle-ages for the occupants of the castle to enjoy and what made it all the more satisfying is that today we had the castle and the views all to ourselves.

After a long day it was getting late so we left now and continued to our final destination, Alcalá de Henares.

30 responses to “Travels in Spain, A Mountain Pass and a Fuel Crisis”