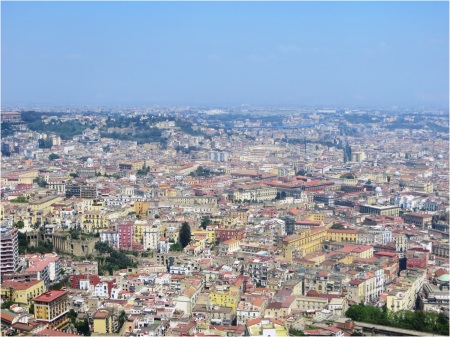 We were rapidly running out of weekend now, the sands of an hour glass always run more rapidly towards the end, and there was so much more to see that it was decision time.

Instead we agreed to take a funicular ride to the highest point of the city and the Castel Saint’ Elmo which sits high above the city on a sort of volcanic ridge that rises quickly in the south from the bay and drops again just as dramatically to the north.  The result of a previous eruption of Vesuvius I concluded without any real evidence whatsoever to support this random geological theory.

As we emerged from the railway station there was a surprise because it was as though we were no longer in Naples at all because there was suddenly an incredible transformation.  There were parks and gardens, flower beds and trees, the air was clean, the streets were tidy and even the traffic seemed to have an almost surreal calmness.  It was almost as though we were suddenly in Switzerland and I immediately assumed that we were now in an affluent part of the city and we walked the short distance to the castle.

There has been a castle here for several hundred years but it has only recently been restored.  Not terribly sympathetically I have to say, there is a lot of concrete and cement but it does provide a pleasant walk around the old battlements and provides panoramic views across the whole of the City, Mount Vesuvius and the Bay of Naples.

I especially liked this view of the historic centre… 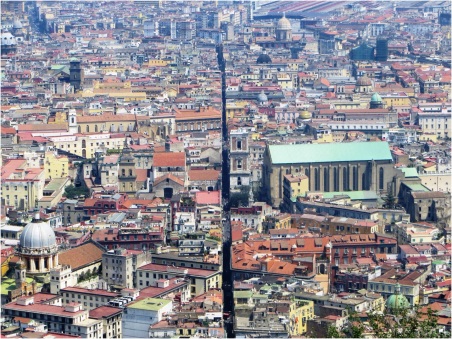 Except for an art gallery full of really weird stuff there was nothing much else to do at the castle so after less than an hour we made our way out back to the funicular and a ride back down to the decrepit streets and the graffiti scarred walls of the old town centre.

To be honest we found ourselves in probably the most disagreeable spot of the city that we had come across so far, Vespa scooters buzzing like wasps, beggars cluttering up the streets and corners decorated with litter.  We walked quicker than we normally do and were happy to shortly find ourselves back in familiar territory in the historical centre where we walked the few remaining streets that we hadn’t previously investigated.

We stopped now for some street food, first a portion of sea life, deep fried and served in a cardboard cone, tasty but ultimately disappointingly bulked up at the bottom with cheap dough balls and after that a deep fried risotto ball, the size of a grapefruit and as heavy as a cannonball so a good job we didn’t buy one each.

We had walked a long way today and we were getting tired as we made our way back to our favourite street bar where we rested for an hour before returning to our accommodation.

The pizzeria that in just two nights had become our Neapolitan favourite was closed tonight so we had to make alternative arrangements and we had earlier decided upon a restaurant in the heart of the historic centre.

To get there we walked first along Via San Gregorio Armeno which is famous in Naples as the street of the crib shops, the ‘presepe’, and is an entire street dedicated to making and selling nativity scene decorations, a centuries old tradition in the city.  It seems that you first buy an empty village or a stable made of clay and cork and then chose and collect figures to add to it.  It was an interesting street full of individual designs and figures ancient and modern ranging from the Madonna and Child to the footballer Diego Maradonna who played for Napoli from 1984 to 1991 and still seems curiously popular in the city.  Not the sort of thing that I would want in my house I have to say!

Speaking of football the historic centre was noisy and busy tonight because Napoli were playing Juventus in an important game at the top of the Italian Seria A league; top (Juventus) v second (Napoli) and people were gathering in pizzerias and bars to watch the game.

The choice of restaurant proved to be satisfactory and we had an inevitable pizza and afterwards walked the streets looking for a gelataria for a final ice cream that we didn’t really need and whilst Kim chose hazlenut I had my all time favourite pistachio and we strolled back to the apartment.

As we walked I kept an eye on the football which seemed to be petering out to a disappointing goalless draw and back at the accommodation we had a final glass of wine and looked out over the street from our balcony.  Suddenly a mighty roar exploded from the city as though Vesuvius had spontaneously erupted and the reason was that Napoli had scored in the very final minute of the game and won the match.

For no other reason than I was in Naples I was pleased about that.  We had enjoyed our weekend in vivacious Naples which is a city that despite its various reputations gets my full recommendation. 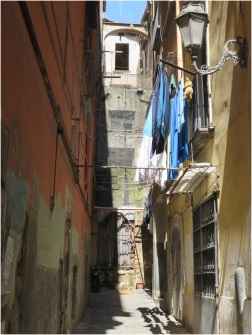 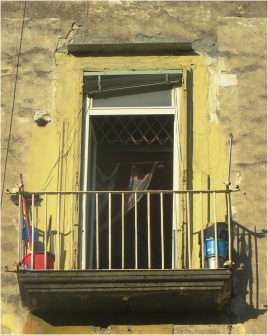 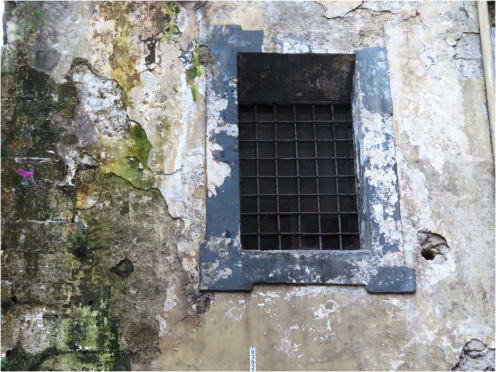