Travels in Spain, Barcelona and the Sagrada Familia 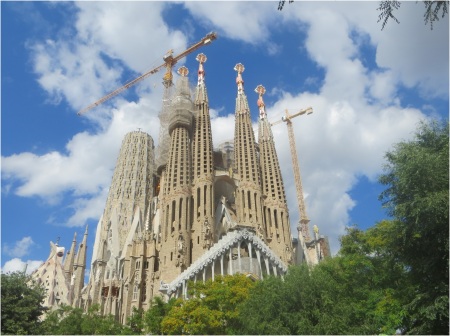 “What I saw in Barcelona – Gaudí – was the work of such strength, such faith, of an extraordinary technical capacity, manifested during a whole life of genius…” – Le Corbusier (Swiss Architect)

We had been to Barcelona before but didn’t hesitate for a moment to go again.  It might be the pickpocket capital of Spain, maybe even Europe, but a couple of months earlier we had survived a few days in Naples without any thieving mishaps so felt confident that we could handle ourselves in Barcelona.

We arrived in the afternoon and completely out of character hopped in a taxi to take us the short ride to our accommodation, the budget hotel IBIS in Eixample which claimed to be close to the Sagrada Familia, the unfinished Cathedral of the Catalan genius architect Antoni Gaudi.  We were not to be disappointed because it was only a five minute easy stroll away.

After approving our rooms we walked there immediately but couldn’t go inside to visit because it was sold out for the day so we had to satisfy ourselves with a walk around the exterior and then booking some entrance tickets for later in the week.

It was quite pricey to get in but then this is the principal source of fund raising because the long drawn out construction is not supported financially by the National State of Spain, the Autonomous Community of Catalonia, the Province or City of Barcelona or even the Catholic Church (it points out that it already has one Cathedral in Barcelona, why does it need another?)  The only source of income is visitor receipts and construction costs are currently estimated at €1 million a month.  That is a lot of visitors.

Work on the Cathedral began in 1882 and it is due for completion in 2026 and although I say long drawn out and nearly one hundred and fifty years may seem a very long time, to put this into some sort of perspective, you can’t really expect to build a cathedral in just a couple of years – except perhaps for the Basilica of our Lady of Guadalupe in Mexico City which was built in just two years but, if you ask me, doesn’t really look like a Cathedral in the traditional  sense – so I am not counting it (it’s my blog!)

So just how long does it take to build a Cathedral?

I digress here but the bombing story reminded me that the German Luftwaffe similarly destroyed Coventry Cathedral in 1940 in just one bombing raid.  This Cathedral with the third highest spire in England after Salisbury and Norwich had taken sixty years to build between 1373 and 1433 which I suppose you might consider quite quick, but not as rapid as the new Coventry Cathedral which was built in only six years and which, in a national poll in the 1990s, was voted Britain’s favourite twentieth century building.

I remember going there on a school visit in about 1964.

Back now to Barcelona.

So we purchased our entry tickets and went inside into a surreal world of a combination of church and building site with pallets of stone and brick side by side with pews and confessional boxes and we wandered around the great nave and the side chapels through soaring arches that look like giant trees with a fluidity of the design that creates the illusion of fusion, columns and arches melt into a viscous panorama that foams, drips and provides refuge for plants, animals and people and as we stood and admired it I hoped that although it is difficult to get inside the mind of a genius like Gaudi that I might at least be able to understand just a little of what it all meant.

As it happens, I am not certain about what I think about Sagrada Familia. It confuses me. It is a piece of Disney World.  Although it was consecrated as a Minor Basilica by Pope Benedict XVI in 2010 (there are currently one thousand seven hundred and fifty Catholic Minor Basilicas and including the Sagrada Familia, Barcelona has nine) I am unsure if this is a place of worship or a Barcelona theme park.  George Orwell said it was “one of the most hideous buildings in the world” .

When the final stone is set in place, the Sagrada Família will be the world’s tallest church, soaring five hundred and sixty feet into the sky. Second highest (currently first) will be Ulm Cathedral in Germany at five hundred and thirty feet high and Lincoln Cathedral in England (currently second) is five hundred and twenty-five.  It will also be the strangest looking and possibly the most controversial place of worship ever built on such an epic scale. Looking for all the world like a cluster of gigantic stone termites’ nest or perhaps a petrified forest, this hugely ambitious church has confounded architects, critics and historians ever since its unprecedented shape became apparent.

Looking ahead I wonder if after completion in 2026 (maybe?) the tourists can be kept away and it can become a genuine Temple of Worship? Currently it is the second most visited place in Spain after the Alhambra Palace in Granada. Will they ever stop that?  Personally, I doubt it. Currently attendance at Mass at Sagrada Familia requires an invitation, rather like the Queen’s Garden Parties in the UK.

When complete, the Basilica will boast no fewer than eighteen spires – eight have been built so far, twelve representing Christ’s apostles, four the evangelists (Matthew, Mark, Luke and John), one the Blessed Virgin Mary and the tallest, Christ the Saviour

It is a magnificent but ultimately pointless building that I suspect will never achieve its original objective. I preferred the Gothic Cathedral in Barcelona Old Town which we visited a few days later.

Maybe I am just old fashioned and I am reminded of my Dad’s negative reaction to the church in the village where we lived when they started serving afternoon tea and cakes, he was outraged that the Vicar would think about turning a church into a café. It is probably a Starbucks now.

I am getting to be like my Dad but that is not such a bad thing! 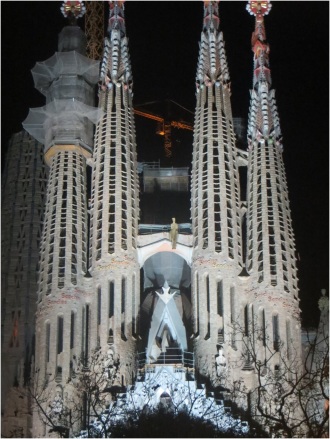 45 responses to “Travels in Spain, Barcelona and the Sagrada Familia”