Travels In Spain, The Romans in Merida

Extremadura is often considered to be the traditional boundary between Moorish and Christian Spain and Mérida itself has previously passed between Christian, Moorish, and even Portuguese control.  Because of its rich and busy history it was declared a UNESCO World heritage site in 1993.

To begin with we walked along a busy main road towards the crimson and saffron Plaza de Torres and near here was our first excavation to visit.  We bought an all sites pass for €12 each which seemed like a good deal and went inside to see the remains of a house that had been the home and office of an important Roman citizen in the first century A.D. and after that we visited an adjacent ancient Roman burial site and cemetery.

It was getting hot as we made our way to one of the main attractions, the amphitheatre and theatre and as we walked we were aware of hundreds of school children arriving in buses, far too many for this to be a normal school trip occasion and we wondered what they were all doing here.  We found the entrance to the site and all was revealed because today, and all week, there was a production of the Greco-Latin Youth Festival Theatre which meant that the theatre was in use and access was restricted.  I was annoyed about that and wondered just how restricted? 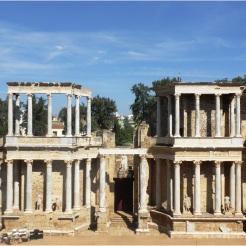 First we went to the amphitheatre which was completed in 8 B.C. and was able to seat up to fifteen thousand spectators within the elliptical stadium.  The previous month we had visited the amphitheatre at Pula in Croatia which accommodated twenty-thousand spectators but this seemed just as huge.  It wasn’t in such good shape however because a lot of it has been subsequently dismantled for alternative building projects.  If UNESCO had been around two thousand years ago then it would still be there.

Mérida was the capital city of the most westerly Roman Province of Lusitania so this was a very important place and the amphitheatre here would have been on the main gladiatorial and events circuit of the Empire and it continued to be used for this purpose until the fourth century.  Today, on account of its past Mérida is a sister city of Rome.

The site was beginning to fill up now with the school children and the volume levels inside the Roman Theatre were beginning to build so we left the amphitheatre and walked the short distance to the theatre next door.

Two thousand years ago this would have been a massive entertainment centre for the city and I suppose that we were lucky because today we were going to see it being used for its original purpose.  Although we couldn’t get down close to the stage area and the columns and the statues and the central seating area was full of chattering and excitable school children we could make our way around the upper circle and visitors were invited to stay awhile and watch the production.  We sat and watched for about half an hour but it was a three hour show and struggling with interpretation we finally gave up, left and moved on.

After a drink and the inevitable dish of olives we made our way to the Roman Circus which would have been quite a way outside the walls of the Roman city.

Although we have now visited a number of Roman amphitheatres we had never been to a racetrack before and this place was stunning in its layout and sheer size.  There is nothing left of the grandstands now because these have all been dismantled and the stone used elsewhere but it was easy to imagine what it might have looked like simply by thinking about the Charlton Heston film ‘Ben Hur’ because it was in such a place as this that the Roman chariot races took place.

Inside what was the arena it was peaceful and quiet with a carpet of rough grass and wild meadow flowers but with a little imagination it was possible to imagine what a place like this would have been like on race days when there was capacity for thirty-thousand boozed-up rowdy spectators!

Leaving the circus we walked along another busy road looking for the site of the aqueducts because although they are not as spectacular or as complete as that of Segovia there are approximately five miles of aqueduct running into and through the city.  We found the largest and most complete, the Aqueducto los Milagros in a green park on the edge of the town with each towering arch topped with an untidy nest of twigs and a family of Storks.

We had been walking for four hours now so this was a good time to find somewhere for lunch.  It proved surprisingly difficult to find something suitable and one thing that Mérida did seem to lack was a good selection of street cafés and bars.  The ones we liked were full and those that weren’t didn’t tempt us.

Eventually, after we had passed underneath Trajan’s Arch on the way back to the centre we came across a place in a side alley off the main shopping street where, partly our own fault it has to be said, although we had a nice salad, we paid a hefty price for it and then sulked for half an hour or so afterwards.  It seemed that we had paid the full price for a menu of the day even though we hadn’t chosen or eaten all of the courses. Another language and interpretation issue and a lesson learned!

25 responses to “Travels In Spain, The Romans in Merida”