Travels in Spain – Madrid, Don Quixote and a Royal Celebration

When I am in Italy I look out for statues of Garibaldi and when I am in Spain I try to find statues of Don Quixote to add to my collection.

Perhaps the most famous statue of him is in the Plaza de España at the extreme western end of the Grand Via and quite close to the Royal Palace and the Cathedral so early one morning I selfishly walked us all down there just to get my picture. This was to end in disappointment because the entire square was closed off behind ten foot high wooden boards hiding a lot of building work as the square was being completely restructured.

Don Quixote is a novel written by the seventeenth century Spanish author Miguel de Cervantes Saavedra and is regarded as the most influential work of literature to emerge from the Spanish Golden Age.

It is the story of a man who believes that he is a knight and recounts his adventures as he rights wrongs, mistakes peasants for princesses and “tilts at windmills” mistakenly believing them to be evil giants. As one of the earliest works of modern western literature it regularly appears high on lists of the greatest works of fiction ever published. In 2002 a panel of one hundred leading world authors declared Don Quixote to be the best work of fiction ever written, ahead even of works by Shakespeare, Tolstoy and Dostoyevsky.

Cervantes has also been credited with shaping modern literary style and Don Quixote has been acclaimed as “the first great novel of world literature”. Since publication in 1605 it is reputed to be the most widely read and translated book on the planet after the Bible. I tried to read it once but found it rather heavy going so gave up quite quickly but as we walked along I resolved to have another attempt.

The others superficially sympathised with my disappointment about the failure to see the statue but I could tell that they didn’t genuinely share it as we walked next to Parque del Oeste to see the Egyptian Temple of Debod.

I was surprised to find a genuine Egyptian Temple in Madrid but it turns out that in 1960, due to the construction of the Aswan High Dam in Egypt and the consequent threat posed by its reservoir to numerous monuments and archeological sites, UNESCO made an international call to help.  In 1968 as a gesture of gratitude for the assistance provided by Spain in saving the Abu Simbel temples that were due to be flooded and lost forever the Egyptian State donated to them the temple of Debod.  It constitutes one of the few works of ancient Egyptian architecture that can be seen outside Egypt and the only one of its kind in Spain.  Well, who knew that?

The Temple was closed to visitors today due to unexplained ‘technical reasons’ but there were some very good views over the city from the top of the park so we stayed for a while and then continued our walk towards the Royal Palace gardens, the Jardines de Sabatini. 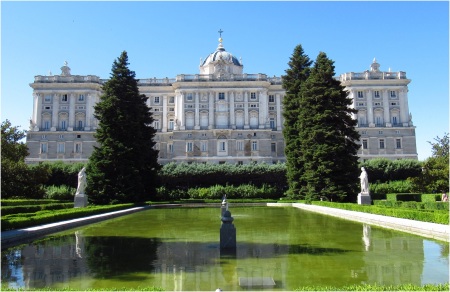 There were lovely walks though the gardens but a lot of police ‘do not cross’ lines and we were soon to find out why when we left and made our way to Palace itself where there were crowds of people outside all waving tiny Spanish flags and trying to see through the gates. It turned out to be part of a celebration of five years of the reign of the King of Spain Felipe VI who was crowned here in June 2014.

Our intention this morning was to visit the Palace but this plan was now in tatters because the place was closed while the celebrations inside continued. So we made our way to nearby Plaza de La Armeria which separates the Palace from the Cathedral and from where there were good views inside the Palace courtyard where we could see the military displays and the arrival of the distinguished guests.

The Royal flag was flying from the top of the Palace which was a sign that the King (full name – Felipe Juan Pablo Alfonso de Todos los Santos de Borbón y de Grecia) himself was there today but to be honest we were quite unable to pick him out. Eventually the soldiers and the military bands all marched off and the crowds melted away into the shadows of the side streets and feeling lucky to have been there at the right time for once we slipped away ourselves back to the city centre.

We thought it might be better to return to the Palace for the visit the next day when it was most likely not to be so busy so today instead we found a nice shady restaurant for lunch and then more or less repeated the guided tour of the previous day but this time at our leisure.

I will bring you back to the Palace in the next post. 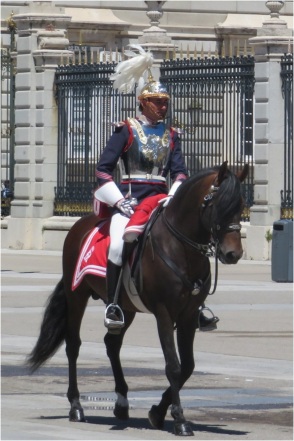 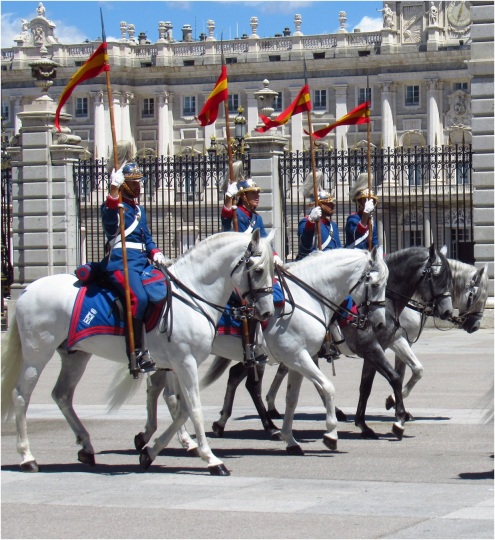 40 responses to “Travels in Spain – Madrid, Don Quixote and a Royal Celebration”