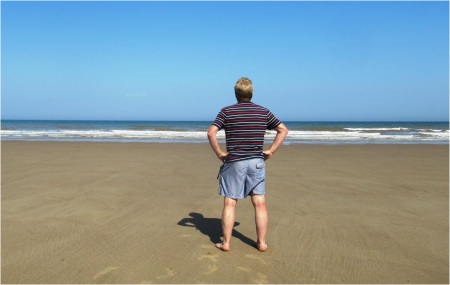 On the first day of the holiday we went to the beach.  The park owners said that due to severe coastal erosion there was no direct access to the sand and the sea but someone helpfully told us that there was but it was quite dangerous and the park owners didn’t want anyone taking legal action against them for having an accident.

We found the steps and made our way to a wide sand and the sea almost two or three miles long and only a dozen people on it.  It was empty, it was wonderful, it was wild, it was a millionaires private beach. 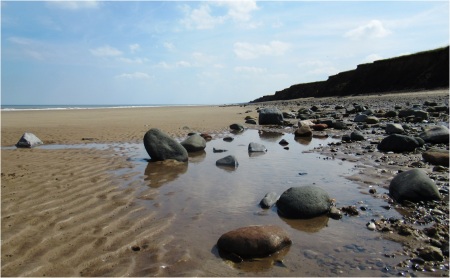 I didn’t really expect to be swimming in the English North Sea but it seems that children don’t feel the cold and have no fear so they were straight in and I was obliged to follow.  Surprisingly it wasn’t too cold. The exceptionally fine weather helped of course.

Whilst we frolicked and swam in the waves I was taken back as though in a time machine to my childhood family holiday memories.

Bad weather didn’t stop us going to the beach and even if it was blowing a howling gale or there was some drizzle in the air we would be off to enjoy the sea.  If the weather was really bad we would put up a windbreak and huddle together inside it to try and keep warm.  Most of the time it was necessary to keep a woolly jumper on and in extreme cases a hat as well and Wellington boots were quite normal.  As soon as the temperature reached about five degrees centigrade or just slightly below we would be stripped off and sent for a dip in the wickedly cold North Sea in a sort of endurance test that I believe is even considered too tough to be included as part of Royal Marine Commando basic training. 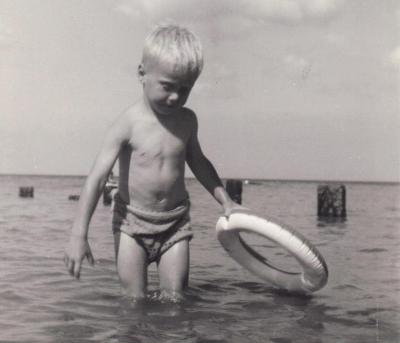 After the paddle in the sea we would cover ourselves up in a towel and making sure we didn’t reveal our private parts struggled to remove the sopping wet bathing costume and get back to our more sensible woolly jumpers.  Then we would have a picnic consisting of cheese and sand sandwiches and stewed tea from a thermos flask – no fizzy drinks or coca-cola in those days.

If the sun did ever come out we used to get really badly burnt because when I was a boy sunscreen was for softies and we would regularly compete to see how much damage we could do to our bodies by turning them a vivid scarlet and then waiting for the moment that we would start to shed the damaged skin off.  After a day or two completely unprotected on the beach it was a challenge to see just how big a patch of barbequed epidermis could be removed from the shoulders in one piece and the competition between us children was to remove a complete layer of skin in one massive peel, a bit like stripping wallpaper, which would leave us looking like the victim of a nuclear accident.

Beach holidays in the fifties and sixties were gloriously simple.  The whole family would spend hours playing beach cricket on the hard sand, investigating rock pools and collecting crabs and small fish in little nets and keeping them for the day in little gaily coloured metal buckets before returning them to the sea at the end of the day. 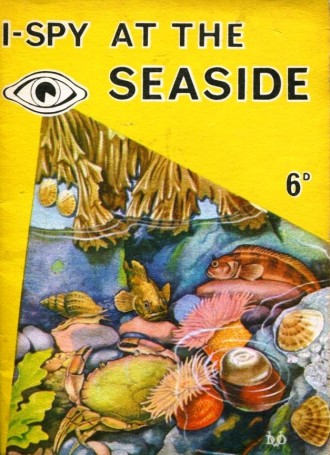 There were proper metal spades as well with wooden handles that were much better for digging holes and making sand castles than the plastic substitutes that replaced them a few years later.  Inflatable beach balls and rubber rings, plastic windmills on sticks and kites that were no more than a piece of cloth (later plastic), two sticks and a length of string that took abnormal amounts of patience to get into the air and then the aeronautical skills of the Wright brothers to keep them up there for any decent length of time.

I remember beach shops before they were replaced by amusement arcades with loads of cheap junk and beach games, cricket sets, lilos, buckets and spades, rubber balls and saucy seaside postcards.  I can remember dad and his friend Stan looking through them and laughing and as I got older and more aware trying to appear disinterested but sneaking a look for myself when I thought no one was watching.  I knew they were rude but I didn’t really know why.

What a glorious day this was and with the weather forecast predicting more of the same I knew that I would be doing the same thing all over again the next day. 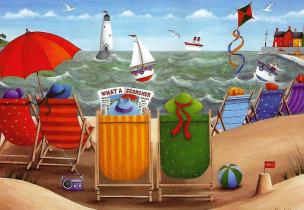 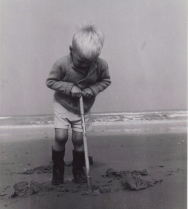 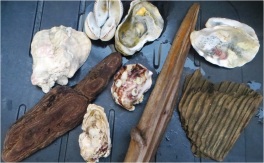 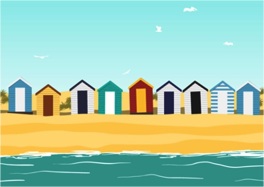 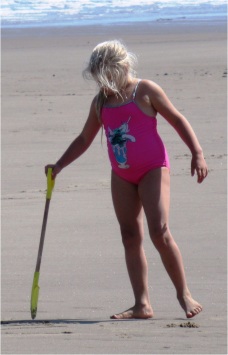 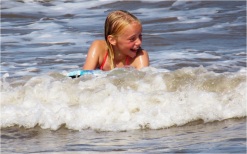 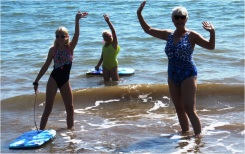