Travels in Portugal, The Trouble With Social Media 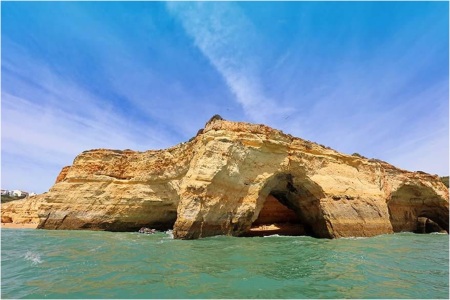 We returned now to the coast with a plan to visit the beach at Benagil, quite close to Carvoeiro and try and find a sea cave that has recently become a popular tourist attraction.

As we set off we had no way of knowing just how popular and it turned out that finding it was not actually that difficult because it soon became clear that every other visitor to the Algarve had chosen the same day to do this.  Parking the car was impossible, getting onto the beach was a nightmare and the whole place was horribly over-commercialised with people pushing and shoving to book a place on an over-priced boat tour.

The Benagil cave is a wonderful natural wonder that has been destroyed by tourism. It is in many guide books as one of the top ten things to see in the Algarve. The problem with visiting somewhere that is very popular is that it is very popular. Even relatively recently this place was a secret known only to local fishermen and villagers, now it is an Instagram bucket-list destination.

Beautiful places have always been fashionable with visitors of course, but the rise of social media means that even the most hidden of hidden gems doesn’t remain so for long. And while in a bygone age visitors would flock to wonderful attractions simply to admire them, now these delights are merely the backdrop to the irritating selfie feeding thousands of social media pages as once secret places are discovered, revealed and overrun.

It is an issue that I struggle with, beautiful places shouldn’t be exclusive but people who visit in their thousands should surely pay more respect and try not to turn it into a Disney World experience. 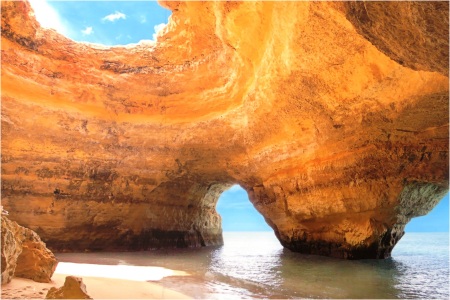 … and the sad fact it would be most unlikely to see it like this because inside would be swarming with visitors off of the boats lining up to get close and get the selfie.

The Irish artist Patrick Swift lived for a while in Carvoeiro and in 1965 wrote an early travel guide to the Algarve.  He refers to Benagil only once and describes the place as remote and medieval with no roads in or out of the village, he makes no mention of the cave.  He makes it sound really nice.  Just like Norman Lewis in Catalonia at the same time he would be in for a shock if he saw it again today.  There is an ALDI supermarket close by now!

My blogging pal Gunta on her site ‘Movin On’ drew attention to this problem in a recent post – ‘Tourist Madness’ which is well worth a read.

At Benagil it is not just the place itself that is spoilt but here the local economy has been irreversibly changed and there is no going back – there are no fishing boats anymore because the fishermen have all abandoned the hard life of the sea, discarded their pots and nets and earn their living these days taking boat loads of people to visit the caves.  Tourists are easier to catch than tuna.  Guaranteed income.  Soft hands instead of callouses.  Regular hours instead of the night shift.

It was a shame not to visit the cave but there were plenty more along the coast which haven’t yet attracted the attention of the Instagrammers but I fear that it is only a matter of time.

So we returned to our accommodation in Carvoeiro where we spent what was left of the afternoon in the garden and around the swimming pool. This was our final night on the south Atlantic coast of the Algarve as tomorrow we were heading west so we did some souvenir shopping (pottery ladybird garden ornaments) and after a final walk to the beach, empty now except for a few hardy stragglers as the sun faded away and then choose a restaurant for evening meal. I had a salad and a cataplana, a sort of fish casserole and Kim had prawns followed by chicken kebab. We had walked seven miles today.

Not the Benagil cave but one close by… 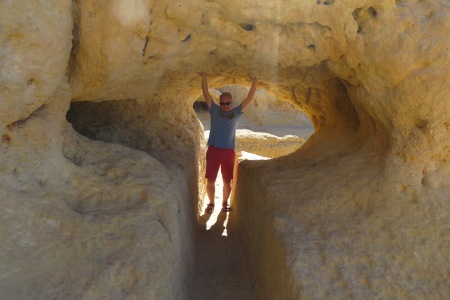 31 responses to “Travels in Portugal, The Trouble With Social Media”