Cyprus, A Stormy Day in Paphos 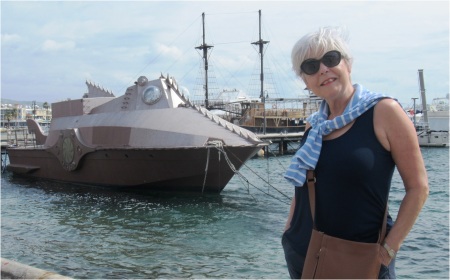 On Saturday morning we woke to blue sky and sunshine but the weather forecast was pessimistic, promising storms and winds by lunchtime.  The weather seemed so good that we thought surely they had got it wrong so after breakfast we set off for the three mile walk to the harbour.

We stopped on the way for a haircut for me that I thought was unnecessary but Kim insisted.  It was a bit untidy I confess but it now seems that I will never be allowed to grow that pony tail!

Along the way we stopped at the Catacombs of Agia Solomoni, a gloomy and overrated underground tomb and sanctuary with catacombs with supposedly magic water.  I hoped the magic water would keep the rain away so I made a wish.  We didn’t stop long but passed by to the twelfth century church of Agia Kyriaki which turned out to be well worth the visit.  Among the excavations are some Roman columns, one of which is called Saint Paul’s pillar.  It seems that Saint Paul visited the island to preach Christianity but the Roman Governor took exception to this and had him flogged.  Poor old Saint Paul seemed to spend a lot of his life being flogged it seems.

A lot of the walk into Paphos was completely dull and uninteresting along a strip of charmless grey car hire offices, car parks, travel companies, estate agents, every so often an Irish Pub and a modern but  unfortunate McDonald’s restaurant.  There is always a McDonald’s restaurant.  But closer to the harbour and the older sections there was a more interesting mix of history and styles.

As we walked we strayed away from the main streets into backstreet areas where some people hang to the old ways like stubborn barnacles clinging to a rock.  Houses from the past which take up space that modern developers would love to get their hands on but people will obviously not give them up easily.  Mostly old people of course and I imagine that once they have gone their families will happily sell up and cash in.

I had to include a door of course…

Our plan was to walk to the sea front and stop for refreshment in a place that we had found and liked but we didn’t get all the way to the harbour because as it turned out,  despite my reluctance to believe them, the weather forecasters knew better than us after all so at about the half way point and with angry grey clouds building ominously above us we did the sensible thing and turned around.

Back at the hotel I sat in the last of the midday sun and with head down reading a book failed to notice the approaching storm.  Suddenly the shrapnel rain hit the balcony like the unexpected Japanese attack on Pearl Harbour and I had to make a dash to the room.  That was it then for the remainder of the afternoon.  Two hours stuck in a bedroom watching afternoon TV and every now and again optimistically peering out of the window into the murky gloom as storm clouds swept in relentlessly from the west.

Luckily there was a small shop in the hotel and we had some wine to share.

After a couple of hours the storm passed, Kim went to the hotel spa for a massage and because I am not keen on body massages administered by a stranger I went instead for a walk along the coastal path in an invigorating force seven gale. The gale force wind gave me all of the massage that I needed!

Later we debated dining options.  There were more storms so should we risk the walk to the nearby restaurants about a mile away or settle for the hotel dining room.  Kim wanted to take the risk but I was a lot more cautious and advised against it.  We chose the latter option which turned out to be a bad mistake, my mistake of course, a poor menu and tables of seriously unruly Israeli families close by.  I was obliged to agree that we should have taken the storm risk, like I said before I sensibly leave restaurant choices to Kim.

Despite the bad weather we had surprisingly managed to walk just over ten miles today.

25 responses to “Cyprus, A Stormy Day in Paphos”