A Cycle Ride Along The Sea Wall 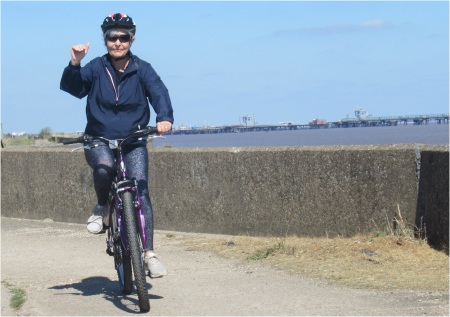 I don’t always feel terribly safe when riding my bike so I don’t do as much cycling as I could but Kim has bought herself a new one so I have had to get mine out from the back of the shed.

Kim has a modern lightweight model with eighteen slick gears and modern features, mine is a twenty-five year old Raleigh with a heavy steel frame and a saddle made out of concrete.  Raleigh bikes were made in Nottingham but you can’t get them anymore, faces with fierce competition from China they ceased production in 2003.

I’d buy a new one to replace it but it still goes nicely and I don’t want a Chinese bike so I’ll wait.  It doesn’t really matter that it is heavy and doesn’t have as many gears because Lincolnshire is mostly flat so cycling doesn’t require a great deal of effort.

Today we avoided the roads that frighten me and used the dedicated cycle paths and pedalled our way to the sea wall about three miles north of where we live.

The sea wall is a stout defensive concrete structure designed to protect the land from potential storm surges and flooding.  It runs for several miles alongside the south side of the Humber Estuary and looks as sturdy and grand as any medieval city fortification.  Rather confusingly it is called the North Bank because it represents the northern boundary of Lincolnshire.  On the north side, in Yorkshire they most likely call it the south bank but I don’t know that for sure.

It was constructed as part of a programme of improved sea defences following the major 1953 North Sea flood that occurred on the night of Saturday 31st January. The deadly floods struck the Netherlands, Belgium and the United Kingdom.

A combination of a high spring tide and a severe European windstorm over the North Sea caused a storm tide and the combination of wind, high tide, and low pressure led to a water level of up to twenty feet above normal sea levels and waves overwhelmed sea defences and caused extensive flooding.  In the United Kingdom over three hundred people were killed, farms and properties were destroyed and thousands of animals were drowned.

There were no weather problems today and as we cycled east from Immingham towards Grimsby the water to our left was flat calm and the industrial areas to the north were basking in Spring sunshine.  Tug boats and cargo ships passed by on the estuary.  Absence of rain for almost two months meant the pumping stations that drain the land were idle.

Pumping stations are important in this part of the country where the land is mostly at or barely just above the level of the sea. The roads and lanes have giveaway names like South Marsh Road, North Marsh Road and so on. In the hierarchy of water management, the Environment Agency is responsible for main rivers like the Humber but within their districts organisations called Internal Drainage Boards are responsible for major drainage channels to manage water levels for land management, flood risk, irrigation and environmental protection.

The pumping stations were quiet but the country still needs electricity so the energy plant was humming away and people are still disposing of rubbish so the Council incinerator was clattering flat out. This is probably the place to say that this is not an especially attractive stretch of coastline, mud not sand on one side of the wall and ugly concrete industry on the other.

As we cycled closer to the port of Grimsby we could see in more detail the Dock Tower.  This was a water tower built in 1852 to provide hydraulic lifting power to operate the giant lock gates of the dock. It was designed by a man called James William Wild who had visited Siena in Italy and had so admired the place that he based his design for the Grimsby Dock Tower on the Torre del Mangia tower on the Palazzo Pubblico in Siena city centre. 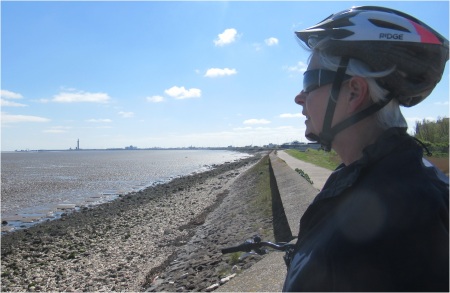 It isn’t possible to get to the Dock Tower from the west because of the high levels of security at the Docks so we were obliged to turn around and cycle back the way that we had come.  By the time we got back home we had cycled about twelve miles or so.  Kim had a shower. I cracked a can of lager.

36 responses to “A Cycle Ride Along The Sea Wall”