Postcard From The USA – The Grand Canyon 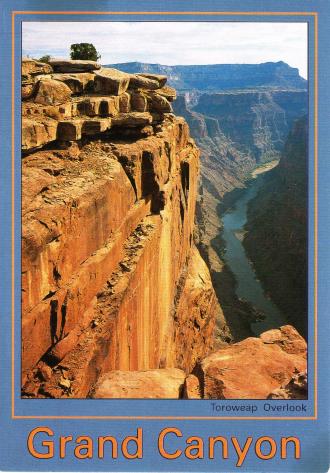 After breakfast and check out from the motel we returned to the South Rim Visitor Centre to spend some more time at the Grand Canyon to see it in the daylight.  It was rather a disappointment therefore that the weather was slightly overcast and without the shimmering sunlight to create shifting shadows and continuous contrasts this seemed to leech the colours and the life from the rocks.

It might not have been colourful but it was still an awesome view as we stared down almost a mile deep to the bottom of the gorge, a hole so deep that can take two days to reach on foot by the official trails.  And it wasn’t so peaceful this morning either as there was a continuous buzz of helicopter activity taking trips out over the canyon.  The helicopters used to drop into the canyon for a closer look but after a number of accidents caused by rising thermal currents this had now been stopped.  It might be allowed again now, I don’t know.

Someone reminded me just recently that geologically the Canyon isn’t a canyon but a gorge but Grand Gorge doesn’t sound so – well, Grand.

The canyon/gorge is almost three hundred miles long, up to twenty miles wide and reaches a depth of over a mile and is one of the most magnificent natural wonders of the World.   This is a very big canyon/gorge indeed and it is almost impossible to get a true sense of scale as you stand and look down into the abyss below.

From the viewing platform we were looking over the fabulously named Granite Gorge and along Bright Angel Creek which led directly to the North Rim Visitor Centre on the other side which although only slightly less than ten miles to the north needs a journey of over two hundred miles to get there.  The view just went endlessly on and on and was so infinitely panoramic that it was almost impossible to fully comprehend the scale of the barren wilderness stretching out before us.

To get a sense of perspective it is worth remembering that you could fit Dartmoor National Park in Devon into the Grand Canyon National Park five times and still have a bit of spare left over.

It is a journey like this that makes you realise the immense scale of the USA.  Arizona is 115,000 square miles of emptiness and long stretches of never-ending road between towns, the UK is just less than 95,000 square miles and Arizona is bigger than forty of the fifty-one countries in Europe.

When it was time to go the coach took us out along a road that followed the line of the canyon with further viewing opportunities and then we parted company as our route took us first east and then north across the Painted Dessert passing Marble Canyon, which is the beginning of the Grand Canyon, and towards our next destination, Lake Powell and the Glen Canyon Dam.

I took some photographs but the grandeur of the Canyon is impossible to capture on a point and shoot camera and even the postcards are disappointing.

19 responses to “Postcard From The USA – The Grand Canyon”