Postcard From The USA – The Nevada Nuclear Test Site 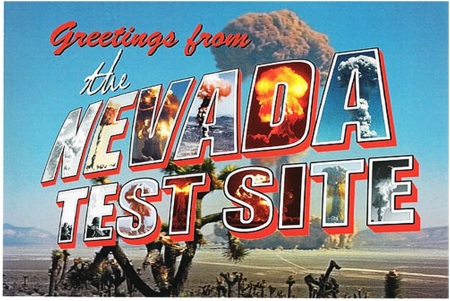 After we left Zion National Park there was about one hundred and sixty miles to drive to Las Vegas and most of this was across the Mojave desert, which is an area of barren inhospitable land that only receives about ten inches of rain in an average year and is situated in the south of Nevada and spreads into Utah and Arizona.  Most of the land in the State is of no use at all for agriculture, the Federal Government owns 86% and much of it is used for military purposes.

Although we didn’t know this at the time the road that we were travelling along was only sixty miles or so southwest of The Nevada Test Site that is a United States Department of Energy reservation which was established in January 1951 for the testing of nuclear weapons and is an area of approximately two thousand square miles of desert and mountainous terrain.  The location is infamous for receiving the highest amount of concentrated nuclear detonated weapons in the U.S.

Nuclear testing was big business in the 1950s as the United States and the Soviet Union prepared with stubborn enthusiasm for wiping each other permanently off the face of the earth.  The fact that a major explosion even on the opposite side of the World might have serious consequences for both protagonists and pretty much everyone else in between just didn’t seem to occur to them. 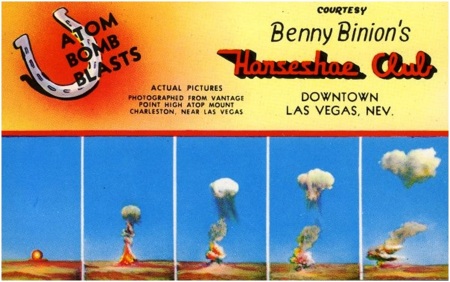 Sadly, it seems to me, military people anywhere don’t mind spending millions of taxpayers’ dollars/pounds/roubles/euros anywhere that suits their inherent belligerent redneck tendencies. Between 1940 and 1996 it is estimated that the United States spent a massive $5.8 trillion on its nuclear arms programme or about $21,000 per US citizen.

What also seems foolish to me is that both the US and the Soviet Union carried out nuclear testing within the boundaries of their own countries which is rather like setting the chip pan on fire in the kitchen of blocking up your own WC – rather foolish.

Research suggests that the hidden cost of developing nuclear weapons were far larger than previous estimates with radioactive fallout responsible for over half a million American deaths from 1951 to 1973. To put that into perspective that is more victims than those from American bombs dropped on Hiroshima and Nagasaki in 1945!

Compare this with the careful strategy of Great Britain which was much more sensible in this regard and who carried out its own modest nuclear bomb experiments on the other side of the World, in Australia.

The Nevada Test Site was the primary testing location of American nuclear devices during the Cold War and began here with a one kiloton bomb on January 27, 1951.  From then until 1992, there were nine hundred and twenty eight announced nuclear tests at the test site, which is far more than at any other test site in the World, and seismic data has indicated there may have been many unannounced underground tests as well.

During the 1950s the familiar deadly mushroom cloud from these tests could be seen for almost a hundred miles in either direction, including the city of Las Vegas, where the tests instantly became tourist attractions as Americans headed for the City to witness the spectacle that could be seen from the downtown hotels.  It is an amazing fact but even more recklessly many others would thoughtlessly drive the family to the boundary of the test site for a day out and a picnic to view the free entertainment.  In doing so they unsuspectingly acquired an instant suntan and their own personal lethal dose of radioactive iodine 131, which the American National Cancer Institute, in a report released in 1997, estimated was responsible for thousands of cases of thyroid cancer in subsequent years.

At this time the U,S. Government spent a lot of money on public information advice on how to prepare for a Soviet Nuclear attack, it seems the money would have been better spent on protecting themselves from themselves.

No one can be absolutely sure that the test site and the surrounding areas are even now completely safe but it doesn’t stop millions of tourists visiting Las Vegas every year and anyway we didn’t know about the close proximity of the site at the time so we continued into the city blindly oblivious to the matter.