From the cottage we walked down into the picturesque fishing village with its sash-windowed stone cottages with hanging gates and quirky names some bright with buoys and boat-shaped planters, seagulls squawking an unruly chorus on the rain shiny bird stained tiled roofs.

Staithes owes its existence to the fishing industry which, in its heyday, employed three hundred men and supported over one hundred boats. The whole village played an active part in the work, helping with repairing nets, baiting hooks and launching boats. When the railway opened in 1885, three trains per week transported Staithes fish to British cities. At the turn of the twentieth century steam trawlers from larger ports killed the locals’ livelihood, until only one full-time fisherman remained in the village.

At the Cod & Lobster pub, we turned on to Church Street and walked the steep uphill climb to join the Cleveland Way. I closed my ears to the complaints and offered the bribe of an ice cream upon our return.  Our legwork was amply rewarded at the top by breath-taking views of the coast and countryside and a spectacular view of the village and the harbour.

From there we continued along to Port Mulgrave, the path drifting dramatically close to the edge of the cliff top revealing continuous evidence of coastal erosion.  The problem is that this coastline really shouldn’t be here at all because it is made up of unconsolidated soft clay and small stones called glacial till that were scooped up from the sea bed by a glacier during the last ice age and dumped here as the ice eventually melted and receded north about ten thousand years ago.  It is just soft clay with the consistency and the look of a crumbly Christmas cake that simply cannot resist the power of the waves.

At Port Mulgrave the cliffs have been scraped away not by erosion but by industrial processes.  There’s a different reason for the existence of Port Mulgrave – ironstone mining, which transformed this part of the coast in the mid-nineteenth century. There were ironstone seams in the coastal rocks laid down between 206 and 150 Million Years ago and the sheltered bay made a good harbour for boats coming to ship the ironstone out to Jarrow. The industry is long gone and little remains of the harbour, but the shoreline at Port Mulgrave stands as a reminder of the industry that once characterised this coast, one hundred years ago there were almost one hundred mines in North Yorkshire. 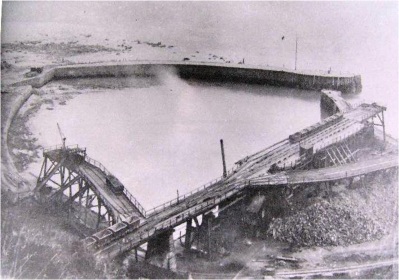 Rows of domestic properties and individual houses exist on the top of the cliff but Port Mulgrave is now derelict and the port itself is completely gone, destroyed by Royal Engineers during the Second World War to prevent it being used as a landing base for an invading army.

We had walked for just over two miles and I was happy to carry on but the constant complaining was beginning to wear me down so eventually I gave in and we returned by a shorter alternative route back to Staithes where the children remembered my promise of an ice cream.

Later on it started to rain again so we were confined once more to the cottage.  During the night the rain continued and became heavier so I wasn’t too disappointed when morning came, we could pack the suitcases and begin the long drive home.

As you can see,, I have perfected the art of standing on higher ground than my granddaughter…